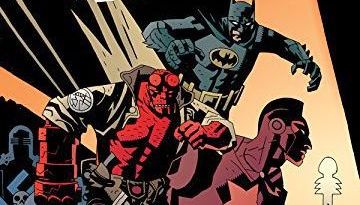 Any good crossover, regardless of length, has to establish things that are taken for granted in continuing titles: reasons for heroes to meet, making a villain a credible threat for a hero above their pay grade or vice-versa, providing a plausible explanation for why say, Batman is hanging out with Thor, etcetera, etcetera, etcetera. It is this last prospect, the two-party crossover, that is the most difficult to do.

The 90s, that dark and dingy decade for comics, had a lot of these: the fan decided extravaganza of Marvel vs. DC, Avengers/Ultraforce (of Malibu Comics fame) and of course the infamous Deathmate, a delay plagued crossover that sunk Valiant (R.I.P) and left an eternal blemish on the already spotty record of Image Comics. Each of these came up with their own justification for the heroes meeting; for Marvel vs. DC, a war between universal gods; Avengers/Ultraforce, a bet between the grandmaster and Loki; and Deathmate was so ridiculously complicated that I’m not even going to bother going into it.

But the four stories contained in DC comics/ Dark Horse Comics Justice League Volume 1; deal with the boundaries between comic book universes in a simple, understated way. They simply ignore them.

A Diverse Array of Crossovers

Each story in this recent trade (Released November 2016) has a similar basic structure. A DC superhero encounters a property owned by Dark Horse, and, without any mention of this being particularly odd, the plot continues apace until its eventual resolution. In a genre beset with gimmicks and flimsy justifications for cross-party collaboration, this is a breath of fresh air. Sadly, that is essentially the only breath of fresh air in this volume. Despite some occasional moments of artistic brilliance and a few good jokes and fight scenes, the stories in this trade are paint-by-numbers affairs, ranging from the beautiful but predictable Batman/Hellboy/Starman to the virtually unreadable Superman Vs. The Terminator.

Two Hits, a Flop, and a Whiff

The first story, Superman Vs. The Predator feels phoned in in all but its best moments. It indulges in hackneyed and offensive stereotypes about Central and South America, and has some embarrassing art goofs that should have been easily caught in editing. The simple “A weakened Superman fights The Predator” plot is needlessly complicated by an unconvincing and overly complicated plotline involving a mad scientist type attempting to bombard the earth with radiation that will kill everyone with Down syndrome.

It is obvious that the artist, Alex Maleev, did not care much for this plot, because it is here that many of the goofs occur. A scientist teleports in and out of a group of prisoners, characters’ faces change noticeably from issue to issue, and injuries magically heal from panel to panel. The rare highlights of both the art and writing are when the story gets to the point, in the fights between Superman and The Predator, and very nicely detailed drawings of The Predator itself. It is an all-right time killer, if you can stomach stereotypes, eye roll inducing jokes, and art embarrassments. If you can’t, and I don’t blame you, it’s a story worth skipping.

If it were not for the four issue monstrosity that is Superman Vs. The Terminator, I might have been a little harsher on the preceding story. Boring, predictable and unpleasant to look at, there is nothing to recommend SvsT. Were it not for the strength of the latter half of the volume it alone would make me rate purchasing this book a strong no. It says nothing, it does nothing, and the art is typical of the decade’s worst excesses; badly proportioned figures, horrifyingly contorted faces, and a garish, eyestrain inducing palette. The plot is barely worth mentioning and can be summed up in five words: Superman fights Terminators; rinse, repeat. It is four issues of nothing. If you must read it, only do it so that the next story might blow you away.

As mentioned above, the two issue Batman/Hellboy/Starman is the highlight of the whole collection. Its plot is not particularly intricate, and the difficulties of bringing the three heroes together satisfactorily in two issues renders some of the dialogue rather clunky. Still, it is a fun romp filled with Nazis, monsters, and delightful quips, and the art is to die for. Mike Mignola was born to draw Batman, and Gotham unfolds in all its looming glory in these brief pages.

The opening panels of police helicopters and Batman tracking The Joker atop the rooftops are Mignola at his best. It makes me wish he drew more Batman-related stories. Though the story bears none of Hellboy’s or B.P.R.D’s deep plot and layered mysticism it is still a treat to watch Hellboy and Jack Knight blast away at an elder god. When I was done reading it, I found myself wanting more, the mark of an excellent story.

Ghost/Batgirl, is the final tale of the volume, and is a nice, self-contained tale. The art, while suffering from some of the period’s many flaws (Squinty eyes! Weird oblong faces! Breasts shaped like gravity-defying melons!) does a good job of accentuating the grotesqueness of the book’s two villains, Malcolm Greymatter and Two-face. It has Barbara Gordon’s Oracle in it, which is always a plus, and the plot, while a little confusing, eventually does a good job of explaining the machinations of the affably evil Greymatter and the delightfully insane Two Face. There are undead henchmen, long moralizing speeches about victimless crimes, and the Ghost/Batgirl tag team is a fun one to watch, full of swinging kicks and intangible tricks. Dark Horse’s mouthy ghostly hero pairs well with the stoic Batgirl, and Oracle gets some good words in edgewise. It is nothing brilliant, but it is fun read.

I bought this book during a vacation in Montreal, and paid 34 Canadian dollars for it. I do not regret my purchase, but it’s not really worth that much. If you see it in the 15 dollar bin (American this time) at your local comic book store, I would say get it.  Superman Vs. The Terminator aside it is a breezy afternoon read, and a good look into the crossover craze of the late 90s. Batman/Hellboy/Starman is another matter; if you can find a copy of the original issues, snatch them up. They are well worth the price.

Are you a fan of this odd crossover? Let us know in the comments section below or send us a Tweet!