Home » The Beginning of an Epic: The Misplaced: Chapter One Offers a Grand Journey in Pursuit of Lost Love 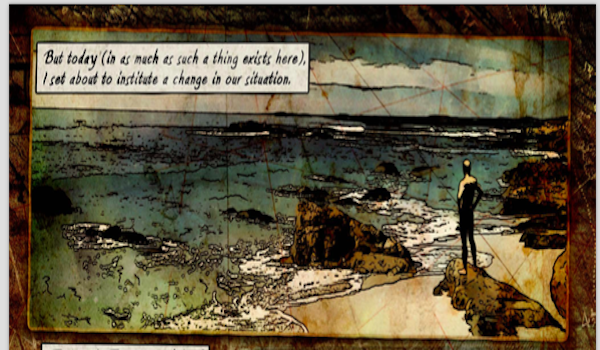 An artistic spectacle, The Misplaced is a fantasy story of love after death. With story and art by Chris Callahan, the first chapter of the story consists of a prologue, main story, and an epilogue. The main story unfolds through narration from a letter written by our protagonist James to his wife Anna, revealing that after their deaths due to a shipwreck, Anna’s soul has disappeared and cannot be located. Feeling as though the afterlife is empty without her, James embarks on an attempt to learn how to leave his “paradise” in order to seek her out.

Although not much happens in this issue, the sumptuous visuals allow Callahan the space to both depict the abstract nature of heaven and to set up important points for future issues. He works hard to develop the dissatisfaction which James feels, as well as the mysterious nature of Callahan’s manifestation of the Tree of Life. The prologue does feel overly melodramatic when compared to the more human emotions displayed later in the story, but it is crafted to give the reader more meaning from a rereading after understanding who the characters involved are. The epilogue is a lovely teaser revealing that there is far more at work than anyone suspects. 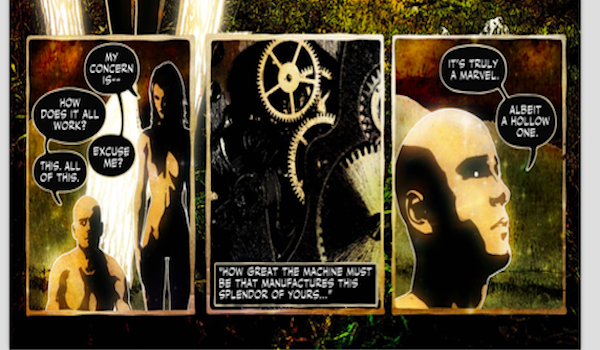 Despite the concern that little happens to advance the story, this is mitigated by the work done to establish the characters. Now that the motivations for James and his supporting cast are clear, the plot can proceed in earnest. Callahan deftly conveys the stifling nature of heaven for James and the hollowness of feeling which he experiences without his wife. Quickly too, he works in the ineffectuality of the agents of this heaven and the horrifying realness of the constructs created for James’ pleasure. James as a character is both sarcastic and polite, dismissive of those who have proven unhelpful and unsympathetic, yet respectful of those who may not even be real. The pitiable failures of his guardian angel to be impressive or useful makes the character relatable to the audience even as it is obstructing James’ actions. The mysterious apparition of the Tree of Knowledge is even sympathetic in its frustration over not knowing where James’ wife is and the way in which a lack of knowledge frightens it. 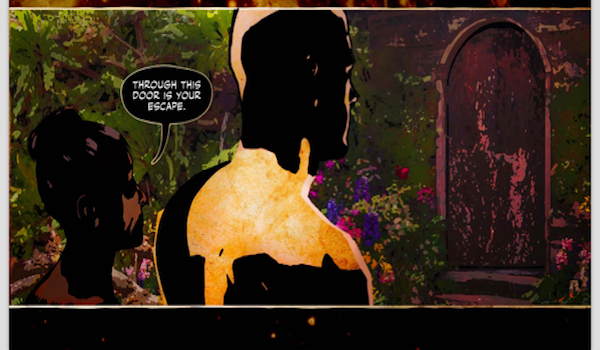 The art is lavish and evocative in all the right ways, with a lovely balance of light and shadow that gives an unearthly quality to its settings. The cover is done in the same style as the rest of the comic, showing a ghostly rose and a spirit. The shattered nature in which the title is rendered alludes to the broken state of things as well as a mirror which plays an important role in the story. James and the angel are drawn as golden beings with shadowy aspects, while the simulacrum and manifestation of Knowledge appear as more fully human, more realized and distinct, a beautiful visual signifier of the flawed imitation of the real that paradise provides. The imagery of clocks and machinery also blends together by the end, emphasizing the artificial nature of the afterlife and the way in which reality has begun to break down.

Callahan’s gorgeous artwork is the main draw here, with a paranormal story of love as the excuse for such detailed drawings. The story is only just underway by the end of the first issue, but the extensive character building indicates that it is heading in the right direction. We care because James is passionate about love and about finding his wife in the face of an uncaring afterlife. The first chapter of The Misplaced is definitely the beginning of something special.

Don’t forget to pre-order The Misplaced! What interests you most about this spiritual journey? Sound off in the comments or send us your thoughts on Facebook or Twitter!