Often times, the Green Lanterns are shown as soldiers who are part of a great legion. These are soldiers who are scattered across various sectors within the galaxy. They are always on call to be ready for any enemies that may present themselves. This could lead to the need for dual diagnosis treatment centres in order to take care of issues such as post-traumatic stress disorder (PTSD) or any type of substance abuse that may occur. With the DC Extended Universe’s penchant for heightened realism, this could be a natural way to look at some of the characters. Post-traumatic stress disorder could present itself upon any number of Green Lanterns. One of the likeliest cases that could be presented is that of John Stewart/Green Lantern. 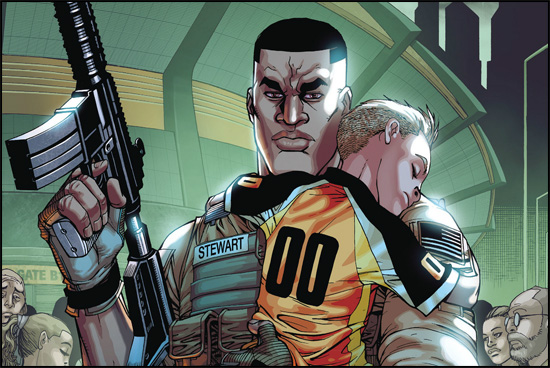 As introduced as a concept for the character on the television shows, Justice League and Justice League Unlimited, John Stewart joined the US Marine Corps when he was young. In the comics, that concept was taken and applied to his character, making him a military sniper before later transitioning into architecture as a career. His fellow Green Lantern, Hal Jordan, was in the US Air Force and the two men met before joining the Green Lantern Corps.

In today’s world, 31 percent of those who served in the Vietnam War struggle with PTSD. About 11 percent of those that fought in the War in Afghanistan face PTSD difficulties. Finally, around 20 percent and 10 percent of Iraq War and Gulf War veterans, respectively, face their own difficulties with this mental affliction. It may be a fascinating way to explore Stewart in Green Lantern Corps, which has been confirmed to be both a John Stewart and Hal Jordan joint avenue after 2011’s Green Lantern did not succeed with audience expectations.

A likely scenario is this could be done in either Green Lantern Corps or even Justice League 2. It might be a more haunting scenario for Stewart to deal with the need for dual diagnosis treatment centers in a first Green Lantern film. It does not seem the film will focus much on the backstories of either one of these characters since that was a topic explored in Green Lantern for Hal Jordan. The audience is also likely to be pretty familiar with John Stewart because of the many millennials that grew up with him and not Hal Jordan as the primary Justice League Green Lantern on Justice League and Justice League Unlimited in the early 2000s.

For John Stewart, he has gained a pretty large following to the point when he was not going to be the primary focus of 2011’s Green Lantern, many people why. Most did not know Hal Jordan had been the main Green Lantern for much of the history of the superhero. While Jordan has remained the primary hero, there are a ton of other ones such as Guy Gardner, Kyle Rayner, and others. The mass multitude of many Green Lanterns could be a great potential possibility for the film to explore.

With Stewart facing challenges from his military past in his mind, it might be something which separates some of the human Green Lanterns from the other ones out there. Some aliens may be immune to the very things that afflict human beings. While it’s been explored in the comics, it could be something which is explored in greater detail if he went up against Darkseid alongside fellow Justice Leaguers in a sequel.

Each of the future DC Extended Universe characters will be different. In Justice League, for example, Aquaman will be a tad bit of different character than who he is when portrayed in his solo film. The solo films can give the characters more time to develop than perhaps team-up films may offer. Either way, this could be one way of looking into the Green Lantern universe a tad different: by exploring the connotations between The Green Lantern Corps and the experience of being in a real-life military.

How might you think the DCEU eventually portray Green Lantern? Let us know in the comments section below or send us a Tweet!