Home » Feeling Natural and Fleshed Out, Mandy The Monster Hunter: Legend Of The Spindly Man #1 is a Spirited Affair 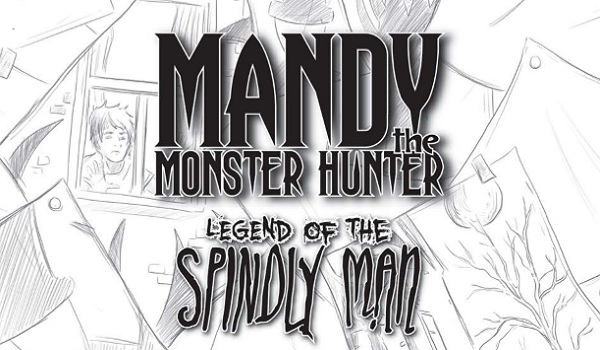 Greetings kind readers! You might be wondering if your bed serves any other purpose rather than just simply being a place to pass out on after you’ve had too much candy. Today we are here to tell you the terrible truth: yes, it does. Some monsters like to make their secret homes underneath our beds, only to come out right after we’ve been tucked in to scare us. This rude practice is commonly known as “terrifying children while they are trying to sleep,” and today we will be meeting a very brave individual who will stop at nothing to punish these unsavory and beastly creatures of the night. Now then, let’s prepare ourselves for true horror as we take a spoiler-free look at Mandy the Monster Hunter: Legend of the Spindly Man #1!

Mandy the Monster Hunter: Legend of the Spindly Man (henceforth referred to as Mandy the Monster Hunter: LotSM) takes place in a world where monsters are an accepted reality that must be dealt with, and dealt with they are; by Mandy, the one who hunts monsters. Mandy is as tough and fearless as they come, and at her disposal is Humphrey: her trusted sidekick and provider of intel on her crusade. Mandy also has all kinds of cool gear that she uses in her battles with the monsters, which is probably a big help considering she just returned from fighting a kraken.

This first issue deals with a monster known as The Spindly Man. Children have been disappearing mysteriously at an alarming rate, and it’s up to Mandy to investigate, hunt down, and neutralize whoever -or whatever– is responsible for the abductions. Her first order of business is to search the homes of some of the missing children to see if she can find any clues as to their whereabouts. 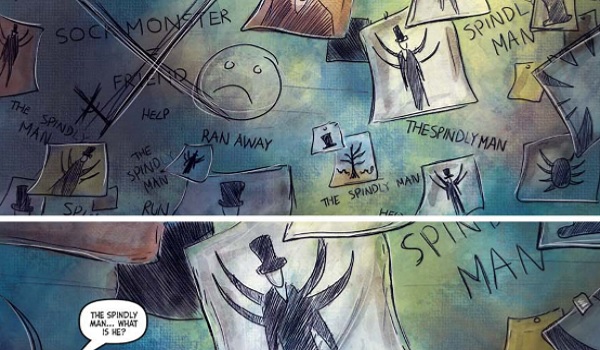 During her investigation, Mandy discovers that she had previously been in contact with one of the missing children. Lewis, the missing child in question, was once terrified by the “sock monster,” and so Mandy took it upon herself to both console and educate Lewis. Apparently, the sock monster is a benevolent creature that is really only concerned with stealing the odd sock here and there, and it actually goes out of its way to watch over children. Two cool things are happening here. First, I like that we’re getting a demonstration of the alleviation of fear through learning, which is something that I think is still very important in today’s world; second, I think I speak for us all when I say “give us back our socks, sock monster!”

Anyway, Lewis has left a bunch of clues for Mandy in the form of drawings of the Spindly Man. Perplexed, Mandy decides to take our her trusty goggles, which allow her to see things that one might only catch out of the corner of one’s eye, like those rod things that were all the rage a while back, or…you know…monsters. Here we get a nice appearance by a gigantic sock monster, who Mandy appropriately names “Argyle.”

On the advice of the sock monster, Mandy decides to investigate the school, where she meets Simon Baxter. Simon is familiar with the Spindly Man, what with all the talk amongst the school children, and he agrees to help Mandy. At this point the whole investigation takes a serious nosedive when the Spindly Man appears and attacks Simon and Mandy. It is here that the first issue of Mandy the Monster Hunter: LotSM comes to a close. Yep, on a cliffhanger! 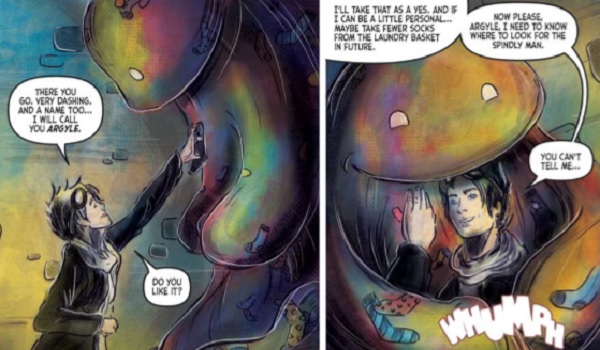 Mandy the Monster Hunter: LotSM is written by Matt Warner and Mark Adams. Now, it is sometimes tricky when you have more than one person on a script as it can come off as disjointed or choppy. Happily, that is not the case here and everything flows nicely. The characters, even Humphrey who doesn’t necessarily “appear” very often, feel natural and fleshed out. Presumably we will learn more about Mandy and Humphrey in upcoming installments, but that’s just the point: we want to learn more.

The artwork is handled entirely by Lyndon White, who does a fantastic job. The book has a water color aesthetic to it, which works really well with the subject matter. While the Spindly Man is quite terrifying as a result of the art direction, things are also allowed to appear whimsical and fantastic, and there are a lot of layers to the overall feel of everything; lots to discover.

Rounding out the creative team are Nikki Foxrobot who does the lettering and Amy Cummins who takes care of the “creepy spaghetti.” I am not certain what that is exactly, but it sounds important.

So what is the final word here? Well, there are a few. Mandy the Monster Hunter: LotSM is somewhat horror with a bunch of mystery thrown in for good measure. Nothing about the book is too adult-orentied, but it’s still something that younger readers might not be able to process. The idea of monster hunting has always been interesting to me (I’ve even tried it a few times), so if you like that sort of thing this book will tick all the right boxes. There’s a lot of promise for the series going forward, and I like the whole “less is more” approach to how the Spindly Man was handled in this first issue. I can easily recommend this to just about anyone who is a fan of the genre.

Is Mandy the Monster Hunter: Legend of the Spindly Man your cup of tea? Let us know what you think in the comments section below or on our Facebook and Twitter feeds!