Home » How Does Avengers: Infinity War Cherry-pick From Marvel Comics? 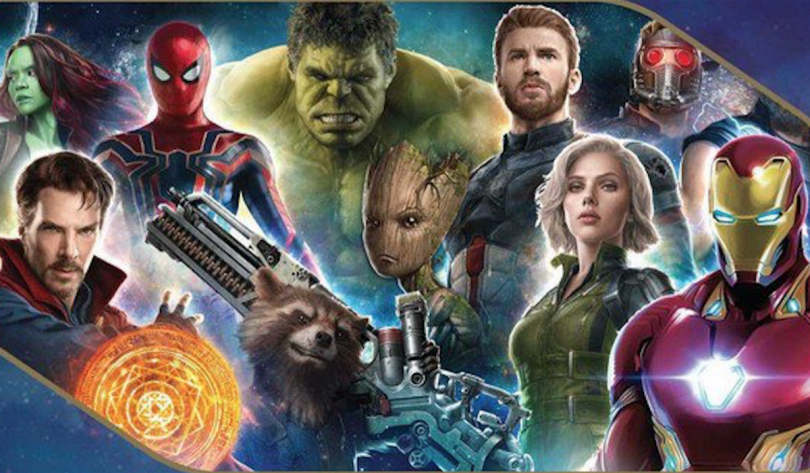 Avengers: Infinity War was a huge success for Marvel Studios and Disney. Before the movie came out, I wrote a comic book retrospective about the original “Infinity Gauntlet”, “Infinity War” and “Infinity Crusade” limited series. Now with the movie out, it comes the time to analyze what Avengers: Infinity War cherry picked from the large amount of source material available from Marvel Comics. From this moment forward, A SPOILER WARNING will be in effect so if you have not seen the movie BE WARNED!  (And if you haven’t seen this movie yet, well then what are you waiting for?)

A Hero Falls From the Sky… 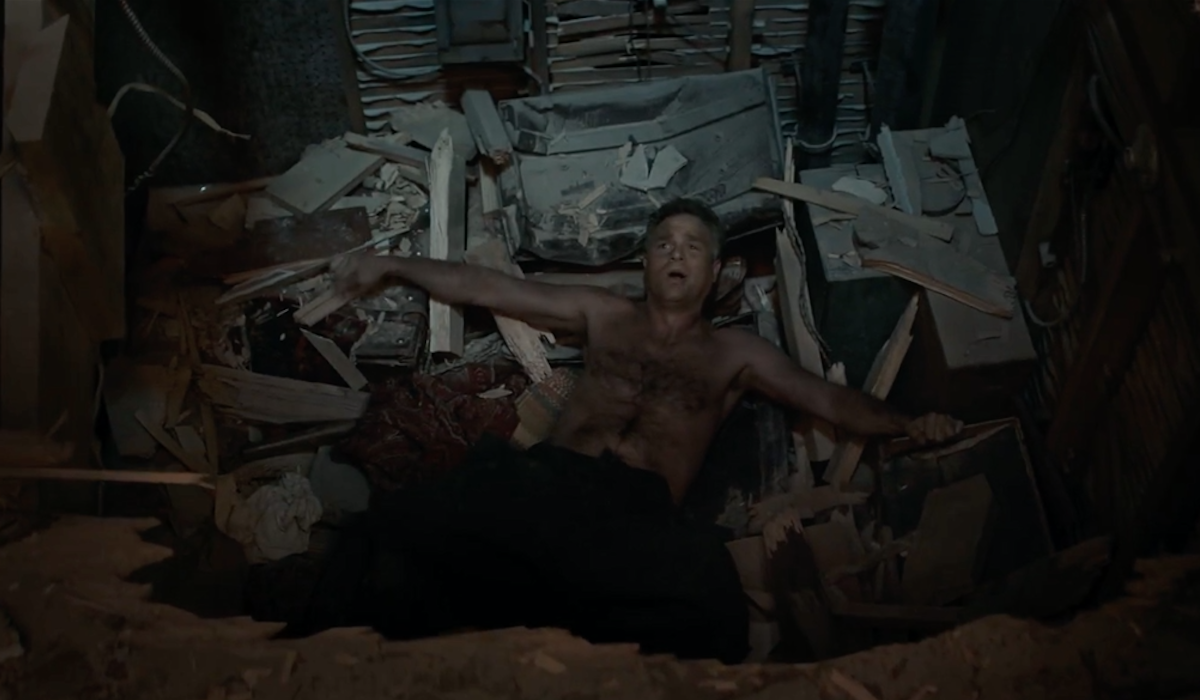 In the opening pages of “Infinity Gauntlet,” the Silver Surfer discovered that Thanos is gathering the Infinity Stones, only to be attacked by the Mad Titan. In a last ditch effort, the Surfer flees to warn the heroes of Earth, crashing into the home of Doctor Strange. Sounds familiar, no?

In the opening scene of Avengers: Infinity War, we see Thor’s ship from the end of Ragnarok filled with dead Asgardians and a badly beaten up Thor. Thanos attacked the ship to get the stone inside the Tesseract, which Loki took from the vault on Asgard. Thor and Loki send the Hulk to take out Thanos, but are horrified to discover that even the Hulk is no match. In his last moments, Heimdall uses the last of his strength to transport Hulk via Rainbow Bridge to Earth. Hulk crashes into Doctor Strange’s place and turns back into Bruce Banner, who immediately warns Strange of the impending threat.

I think this was a smart adaptation of the opening pages to the opening scenes.  Someone had to warn Earth’s heroes of the threat of Thanos and since Silver Surfer is still in the back-pocket of FOX along with the Fantastic Four, Bruce Banner/Hulk returning to Earth was a good replacement. 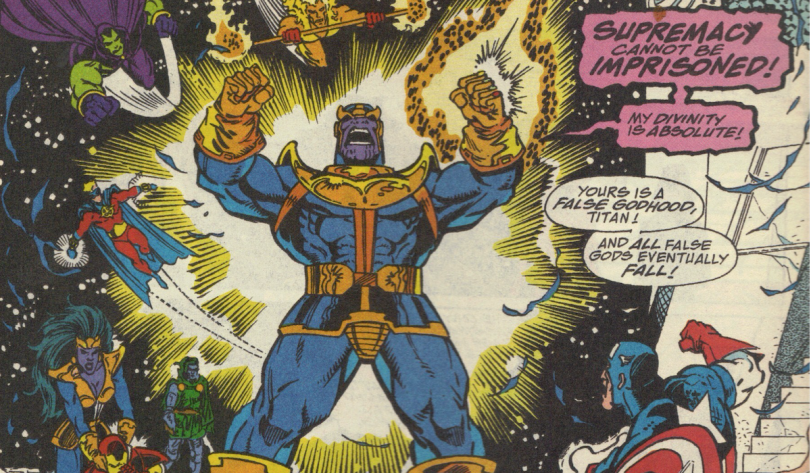 A lot of why the “Infinity” storylines by Jim Starlin resounded throughout the Marvel Universe was because of the depth he gave to Thanos the Mad Titan. Starlin‘s Titans were meant to rival DC’s popular New Gods, that’s why there are a lot of comparisons between Darkseid and Thanos. They are basically the same character if you really think about it, but it’s not necessarily a bad thing. (This happens with a lot of Marvel and DC characters that very similar–think about Deathstroke, Deadpool and Deadshot, just saying). Thanos as the bad guy of Avengers: Infinity War opens the MCU to the wider mythology of the Marvel cosmic universe. 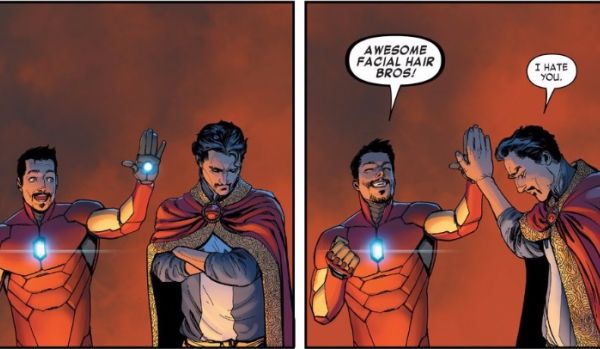 In the comics, Marvel’s magic users, like Doctor Strange and Adam Warlock, were the real saviors of the story. The comics, of course, were also able to use everyone and anyone that they needed to combat Thanos, but in the MCU we only had Doctor Strange, Wong, and Scarlet Witch. I honestly did not expect Doctor Strange to have such a big role in the movie, but I am glad that he did. His magic set up a great ending: knowing there was only one possible successful outcome, and then leaving it up to Tony Stark to figure it out.

Thanos Winning and Wiping Out Half the Universe 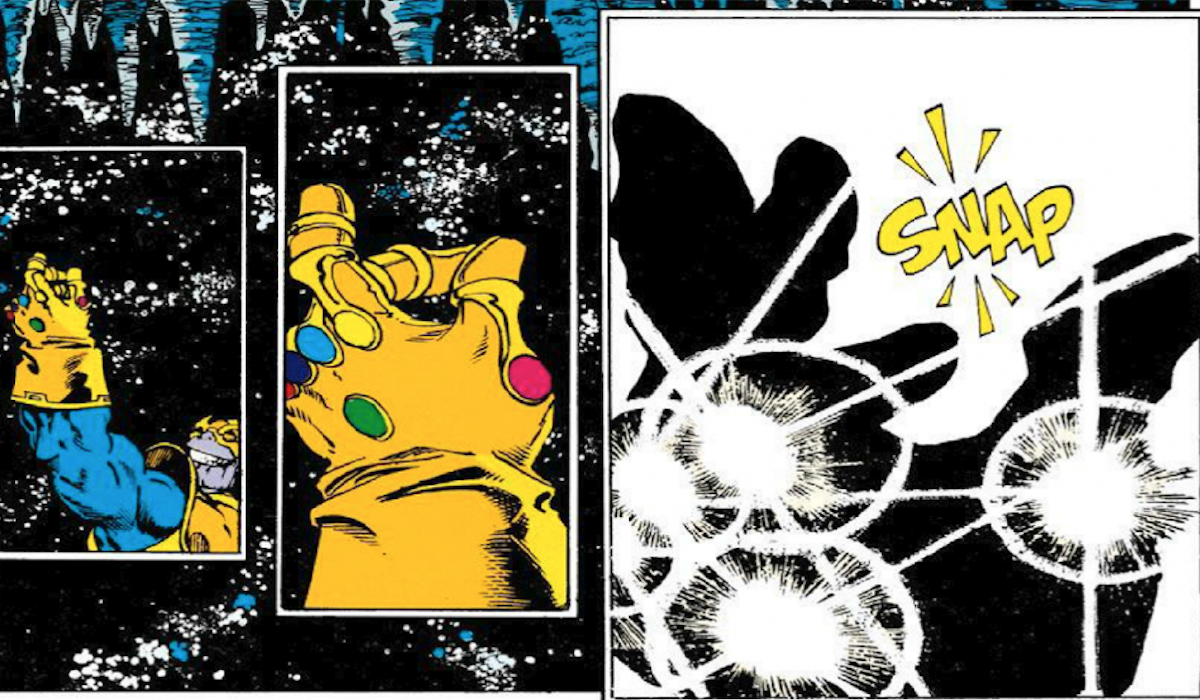 Long story short, in both versions Thanos wins. In the comics, he didn’t have to wait that long after getting all the Infinity Stones in his gauntlet before wiping out half the universe to please his crush, the personification of Death. In the movie, he only had a full gauntlet at the climax, after taking the mind stone from Vision. The reasoning behind why he wanted to half the universe’s population was similar from comic to movie, but not quite the same. Death, in the comics, wanted Thanos to half the universe’s population for her favor and as payment for bringing Thanos back to life. The MCU’s Thanos was more of a philosopher, actually; He thought that he was saving the universe by cutting the population in half so there would be enough resources for those remaining. It begs the question why he didn’t just double or triple the resources of the universe? He’s got the Infinity Stones. It would have been a less tragic option, but definitely speak to his villainous nature.

The comic and movie adaptation of the “Infinity” stories and themes are their own distinct stories, but share many elements. For example, the MCU didn’t kill off the same characters as the comics. Spider-Man was doing just fine after “Infinity War”, but after the movie… well… *sobs* The MCU has had a different, smaller batch of character to work with than the 30-year-old Marvel Comics had in the early 1990s. Nonetheless, the MCU’s narrative borrows heavily from the comics and tailors it well to its own unique universe.

What did you see cherry picked from the comics in Avengers: Infinity War? What are you hoping will be adapted in the sequel? What should have happened differently in the movie?Let us know what I missed and sound off in the comments or send us your thoughts on Facebook or Twitter!