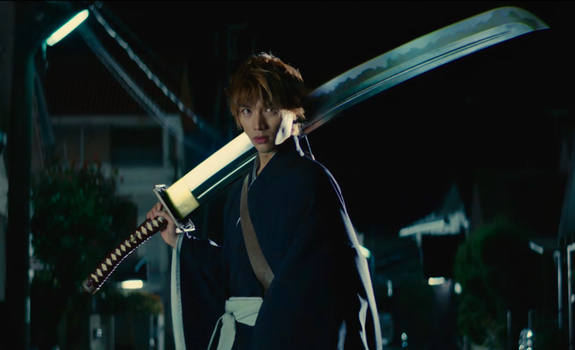 The curse has been broken! We’ve waited a long time for this. And, no, I am not talking about Big Brother being canned at long last. I’m talking about a live action film adaptation of an anime being actually good! Hollywood has been kicked to the curb with its repeated, critically panned films like Dragonball Evolution and Ghost in the Shell. Netflix has recently started producing and streaming anime adaptations with varying results. Death Note was turned into a jumbled romantic mess, and Fullmetal Alchemist looked like an expensive cosplay photoshoot. Well, Bleach finally broke the mould!

Adapting the energetic, spirited, and well, animated medium to live action isn’t easy. Well, colour me thrilled that the adaptation of Tite Kubo’s manga Bleach is a roaring success. And it wasn’t just good – it was great! The absence of Bleach has been a long-drawn one. The manga only ended a couple of years ago, with a gravely rushed ending (thanks Shonen Jump!), and the anime shows no signs of returning. But, this movie is more than welcome, and without a doubt, the best anime adaptation made. It’s a slick, well-paced action movie that reflects the manga’s story and core relationships perfectly. It serves as a worthy adaptation for the fanbase, and simplifies the source material for newcomers to understand it.

Bleach is essentially what if Ghostbusters began as a Japanese manga, and everyone fought with giant swords. Ichigo Kurosaki (Sota Fukushi) is a 15-year old kid who can see ghosts, and tries to live a normal life with his twin sisters and wacky father. His mother Masaki was killed when he was a child, this becoming a major plot point later on. Ichigo meets Rukia Kuchiki (Hana Sugisaki), a Soul Reaper, who hunts corrupt souls called Hollows. When one attacks Ichigo’s family, Rukia is injured, and she is forced to loan Ichigo her powers, transforming into a Soul Reaper himself to defend his family.

Unable to retrieve her powers from Ichigo yet, Rukia poses as a high school student, and has Ichigo act as a substitute in her duties. But, Rukia’s actions soon come with dreaded consequences. Turns out it is illegal to give a human the powers of a Soul Reaper, with Rukia’s friend Renji Abarai (Taichi Saotome) and older brother Byakuya Kuchiki (Miyavi), come looking to apprehend her. Rukia convinces them to give her time to get her powers back by slaying a Hollow named Grand Fisher. By tragic circumstance, this Hollow murdered Ichigo’s mother, giving him a drive to slay the monster and defend Rukia’s honour.

The film is a quick-paced 108-minute film, wondrously blending the first story arc into a fluid narrative; something which the Fullmetal Alchemist last year failed to do in favour of cherry picking best moments. Ichigo and Rukia’s relationship, and those with their families, remain the main focus. Fukushi and Sugisaki have great chemistry, capturing the smug humour of Ichigo and Rukia, but their trusting bond. Acting across the board is pretty good, though Renji’s characterization lacks his more nobler traits. Byakuya remains eerily cold, though he is a little more lenient and honourable than his initial role in the manga.

Though the film is the finest in its field, it isn’t without flaws. The film has one-too-many training montages, though they are important to Ichigo and Rukia’s relationship. As such, the supporting characters don’t have much to do. Orihime Inoue (Erina Mano) and Yasutora “Chad” Sado (Yu Koyanagi) have bit parts with watered down personalities. Still, the film does appear to set-up their future involvement as Ichigo’s battle buddies. Uryu Ishida (Ryo Yoshizawa), Ichigo’s rival and last of the Hollow-slaying Quincy clan, is established as an obstacle to overcome. But, when his big moment comes, he is pushed to the sidelines when Renji and Byakuya arrive. The mysterious Kisuke Urahara (Seiichi Tanabe) shows up to provide exposition when needed.

Aside from that, the film remains great fun to watch. The attention to detail is exquisite, particularly with the Soul Reaper costumes. The CGI used for the Hollow is pretty good, capturing their menacing physique. The action sequences are fantastic, relying on excellent stuntwork and wires to recreate the high-flying battles from the anime. I am certain that the huge swords are computer-generated but the quality makes it look like they are actual props. The soundtrack makes homage to the tense rock score of the anime.

This adaptation of Bleach is a fantastic job by a lot of talented people, honouring Kubo’s creation where others have failed. My one concern is, if this warrants a sequel, will it become stuffed, considering the huge amount of characters and set pieces that are in the manga’s second arc? We’ll have to wait and see. But, for now, Bleach succeeds at being the best anime-to-live-action adaptation made.

Have you seen Bleach on Netflix? Did you love it, or want to send it to Hueco Mundo? Should other adaptations be as cool as this? Leave a comment below or on our Twitter feed.