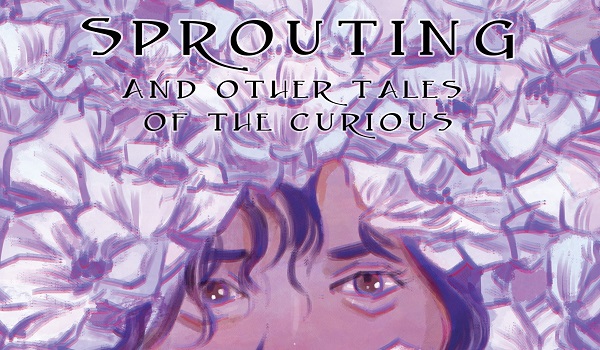 Sprouting and Other Tales of the Curious is a 40-page comic anthology written by Asa Wheatley (writer of Tails of Mystery). Asa also had a recent guest appearance on PodCapers to talk about this new anthology. Sprouting and Other Tales of the Curious has four short stories. Each short story is written by Asa and drawn by a different artist, including the talents of Sammy Ward, Michelle Marham, Kat Willott, and Emma Graveling. I got a chance to read the anthology.

Illustrated by Ward, “Sprouting” featured a young woman with a curious situation. “Sprouting” was story about loneliness and finding a place to belong. The art by Sammy Ward was beautifully done to match to the tone of the story with good colors. In order not to spoil anything from the short comic, I will just comment that it was an amazing speculative story.

Illustrated by Marham, the second story “A Witch’s Penance” leaned more on historical events featuring the witch hunts of the 16th and 17th centuries. It’s a lot darker and features murder. There’s an obvious antagonist in this short story and he’s quite wordy, which is era-appropriate puritanical preachy. The best thing is how it ended. The art by Marham’s artwork has nicely sharp lines.

The third story “Hanging in the Darkness”, illustrated by Willott, is a horror story. The narration was vague and had threads of madness throughout certain statements. I can’t say more about it because of the twist ending. Willott’s art (who did the art on Tails of Mystery) provides an ambience of spookiness. It kept in tone with the story.

The final story was the only prose story with a few black and white illustrations to expand on the storytelling.  Some of my favourite stories take some innocent children’s game and turn into a nightmare. “Finders Keepers”, illustrated by Graveling, featured a game finders keepers with two young girls gone wrong. The creepy picture to end the story was amazing! I really liked the black and white art of this story. These illustrations are my favourite in this anthology. The font, however, made it kind of difficult to read.

The four short stories were all strong standalone stories. The most difficult aspect of writing a short story is keeping the story self-contained. Asa has a good handle on short stories.  In regards to the artwork of each, I found them all well done. The black and white illustrations of Emma Graveling were my favourite, as I mentioned before. Sprouting and Other Tales of the Curious is a great anthology and very enjoyable to read.

Overall, anyone who is a fan of short stories, horror, and speculative fiction, I would highly recommend it and support it on Kickstarter.

Have you already backed Sprouting and Other Tales of the Curious? Let us know what you think!  Sound off in the comments or send us your thoughts on Facebook or Twitter!