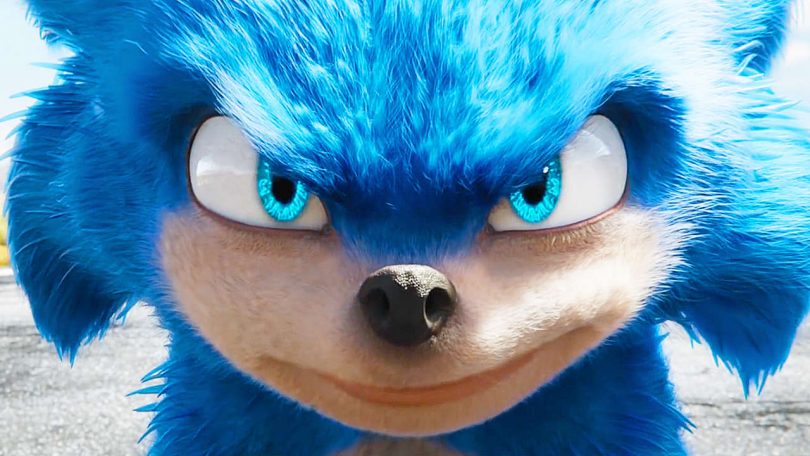 After months of dread, leaked concept art, and gnashing of teeth, the first trailer for Paramount’s Sonic the Hedgehog film has been released. It is as awful as expected. Some are already crying fowl, declaring this the worst video game movie of all-time. That statement could be right, if the trailer is any indication of how little Paramount cares about this movie’s content. Yet another movie that exists not to tell an engaging story, but to just make cash from a recognised brand.

The obvious thing to tackle first is how horrendous Sonic’s new “realistic” design looks. Changes so bad that worldwide fans, Sega itself, and Sonic’s original game designers have expressed distaste for it. Sonic looks like he took a spin through the Uncanny Valley Zone, resembling some sort of mo-capped human body, with his head photoshopped on top. The only time he looks bearable is when he is not moving at all. And we thought Will Smith would be the scariest blue thing on film this year. Yikes! The special effects designers have reasoned that they changed Sonic’s appearance to make it look like he belongs in a realistic setting. Yes, because realism is needed for a talking, blue, cartoon hedgehog!

And, that again is the problem: Sonic does not and should not work in a live action setting. This is even more obvious when you realise how generic and paint-by-numbers the film’s plot will be. It is your bog standard “alien on Earth” story that has been told repeatedly by better movies. It is the same approach Paramount took with Transformers and Teenage Mutant Ninja Turtles – an unknown creature is on Earth, and the American military are deployed to capture it. Well, it looks like it is good old Sonic’s turn to fill in for E.T. in this tepid cauldron of diseased chili dog leftovers.

What is the story? Sonic, voiced by Ben Schwartz, appears to be from another planet or dimension, finding himself in a rural American town called Green Hills (urgh!). There, he is befriended by the town sheriff played by James Marsden, and together they have to flee from the government when they come calling. The military decide to deploy Dr. Robotnik, played by Jim Carrey playing himself, to catch Sonic after he causes a nationwide blackout. Robotnik appears to be an embarrassment to the armed forces as an insufferable genius, utilising advanced robotics in his task. Sonic’s hair appears to be empowered, producing its own electrical energy surge. Sonic isn’t the Flash, you know, despite this trailer’s attempts to frame him as being similar… which is kinda true to be honest. 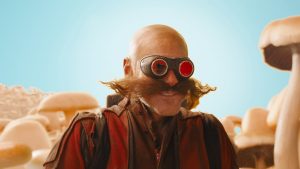 Jim Carrey appears to be the sole reason to view this movie, hamming it up like the good old days, and at times, feels like he is doing a Robbie Rotten impersonation. Already believing he is a supervillain, Robotnik doesn’t look that far from going full Eggman on everybody. The designs of Robotnik’s machines appear to take inspiration from the Swatbots, so there’s that I guess. The film is being promoted as a “Jim Carrey movie”, since he’ll likely be the one positive in this pile of Flicky poop. The trailer utilises classic Sonic sound effects, repurposes the Power Rings as a Doctor Strange-inspired portal system, and has the cringeworthy slogan of “Every hero needs a genesis.” Hardy-har-har-har!

Sidebar: Garry Chalk – voice actor of Grounder in The Adventures of Sonic the Hedgehog, and of Dr. Robotnik in Sonic Underground – is in this movie! There’s at least a second positive, I suppose.

Setting Sonic in the real world away from his own has been done before in Sonic X, but even that was in animation. I had hoped that Tails, Knuckles, and Amy Rose would appear, but seeing how awful Sonic looks, their absence is a blessing. Despite having multiple animation companies producing the film, why did they decide to go with live action? I suppose because it is cheaper than animation.

The film is the directorial debut of Jeff Fowler, a visual effects designer. You’d think that talent would have made the trailer’s effects look a bit better. Sonic’s design is the stuff of nightmares, physically repugnant, and despite Ben Schwartz’s talents, he won’t redeem this hideous, heinous hedgehog’s appearance. And, those legs! Sure, it looks cool when Sonic performs a Spin Dash and a sonic boom, but he isn’t fast enough to freeze time. Even the Flash can’t pull that off. Yet, despite being that fast, Sonic can’t dodge a tranquiliser dart. The one gag I did like is that Sonic wears out his shoes often.

Due to the backlash of fans towards Sonic’s redesign, Fowler has promised that he has listened to the feedback, and plans to change the design. Of course, we have no idea what this might mean. Most likely, it won’t be a mass overhaul, but just minor tweaks at best. Slight alterations could make Sonic look a little less alien, and more akin to his classic look. While I personally dislike Sonic’s appearance, such pressure could be unfair to the movie’s hardworking animators and special effects designers.

In hindsight, perhaps we are all being too unfair. This could just be a harmless movie, headlined by two well known actors, and a formerly profitable video game mascot. It is certainly different than what Sega and Sonic Team has been regurgitating for the past decade. Video game movies are by no means easy things to make. Having to tell a more simpler story may be a requirement for game movies, since most films consist of only two hours, whilst games can be as long as they like.

Though, on the other hand, most video game movies are pretty bad. The first adaptation, Super Mario Bros., was so rubbish that Nintendo avoided Hollywood for twenty years. And the less spoken about Uwe Boll‘s turds, the better. Others have compared this to Detective Pikachu, but at least the Pokémon still look like Pokémon. That movie might work, because it is actually set within the Pokémon universe, embracing its video game origins.

Nothing works in this trailer: the special effects are off-putting, the comedy is stiff and lifeless (a child abuse joke – really?), and not even Jim Carrey may make the film worth the watch. The trailer’s final shot shows Robotnik looking like his iconic self, though this likely won’t come into effect until the end of the movie. Perhaps the movie won’t be as bad as the trailer shows, but my hopes aren’t high. To quote Sonic during his better days: “That’s no good!”

Oh, and also, what the heck does “Gangster Paradise” have to do with Sonic?

What did you think of Sonic’s first live action trailer? Is it horrifying, or does it look kinda okay? Have you gotta go fast to the bog for how awful the design looks? Leave a comment below, or on our Twitter and Facebook feeds.