A few months ago, Sonic the Hedgehog’s live action movie seemed doomed before it was even released. The first trailer featured one of the most repellent reimaginings of a character in cinematic history. When fans, critics, and Sonic’s original creators all expressed their displeasure with Sonic’s redesign, movie director Jeff Fowler announced that the film would be delayed until 2020 while Sonic’s appearance was fixed. Months on, the second trailer dropped, and it features a brand new design for Sonic more truer to his classic look.

Hideous character designs, the first trailer was a weak mess with not much of an clue on what the movie was about or wanted to be. Luckily, the second trailer made up for it with more focus on the story, characters, humour, and action.

First off, Sonic looks fantastic. The strange, uncomfortably human take on Sonic in the first trailer was so repellent, it put just about everyone off. The disproportioned head and body, the lacks of gloves, and human teeth only added to the understandable backlash. In the same year of Detective Pikachu, which faithfully adapted the Pokémon world, the Sonic went in the complete opposite direction. The first trailer gave us the impression it was telling a formulaic plot where a fantastical character ends up in our world with nothing interesting or fun to say. Not to making trying to make a talking blue hedgehog “realistic” was an incredibly silly idea.

Credit is due to both Jeff Fowler and the animators for making the effort to fix the problems before the movie predictably tanked upon release. In most circumstances, filmmakers (or the producers financing the movie) ignore fan criticisms and just get on with releasing the film, then wonder what went wrong. 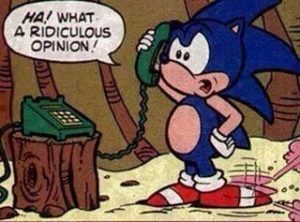 Movie adaptations are either handled with care or just to make a buck on a brand name, but Fowler’s turnaround was a pleasant surprise. He clearly wants to make this film a success, and the changes completely won over the fanbase and naysayers. Best of all, it brings enthusiasm for the movie, beyond looking to Jim Carrey to carry the whole picture.

Sonic’s new, better appearance was designed by comic book artist Tyson Hesse, who previously worked on Archie Comic’s Sonic publication. That and the frenetic performance by Ben Schwartz makes Sonic instantly likeable, fun-loving and maybe a bit too snarky in all of his dialogue. Granted, that is the classic personality of Sonic, though hopefully there will be more to the character, similar to just how Detective Pikachu proved to be a compelling fella. Sonic is allowed to have depth, it’s just that he isn’t given much opportunity to do so.

The storyline is made more clear: Sonic the Hedgehog flees his world through a Warp Ring, since apparently everyone is trying to steal his powers. I assume that is either his super speed or the rings themselves. He winds up in the sleepy town of Green Hills, Montana, where he lives in a mancave (or hog-cave?). That appears to change when he causes a blackout, alerting the US Government, military, and Dr. Robotnik, who is depicted as an eccentric roboticist. Robotnik becomes obsessed with capturing Sonic and sets out with his machines to find him. Sonic teams up with smalltown cop Tom Wachowski (Jason Marsden) to go on a road trip, evade Robotnik, and presumably get home.

While the first design of Sonic was rather stiff and lifeless, the new one is full of life, expressive and jubilant, and the comedy is appropriately fast-paced. With other speedy characters, they normally slow things down when they are moving fast, or they appear to teleport in a blink of an eye, like Quicksilver and the Flash. In Sonic’s case, we see him moving about doing multiple things at once for comedic effect. He plays table tennis against himself, plays all positions in baseball, and engages with himself in a pillow fun. The gags come thick and fast, and Sonic’s amiable and somewhat dorky charm really adds to it.

However, perhaps this trailer should be taken with a grain of salt. While it does now look much better as a movie, have the editors put all of the best bits within the trailer? How long is Sonic truly in the full film? Hopefully it won’t be like the Transformers movies where the titular characters were guest stars in their own franchise (thank heavens for Bumblebee). These new jokes and such may have been made explicitly for the new trailer to appease the fans and critics.

Improving Sonic’s design does not necessarily guarantee that the move will be a success. It follows a familiar plot which has been done poorly with other characters like He-Man and the Smurfs, and we all know video game movies often suffer at the box office, save a few exceptions. Still, Detective Pikachu again did very well and has a sequel in the works. Perhaps its success will rub off on Sonic next year. Plus, Mario is finally getting a new film, though whether or not Illumination does a good job remains to be seen.

This new trailer raised spirits that Sonic’s upcoming movie does well. It may not ending up being a good film, but if the trailer is any indication, it will at least be a fun movie.

Did you like the new trailer for Sonic the Hedgehog? Does his design look like a vast improvement? Don’t be silly, that’s not even a question. Leave your thoughts, chili dogs and power rings below, or on our Facebook and/or Twitter feed.