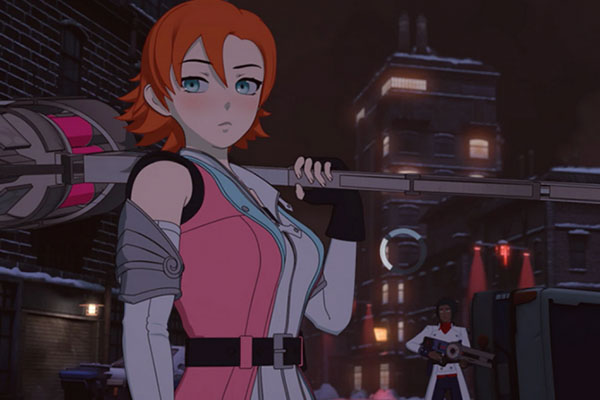 ,The tenth episode of RWBY’s seventh volume is not very long, and not much happens, but, it is most certainly a thrill ride. From start to finish, the action and ingenuity of our heroes shines through. While fear and paranoia have loomed over Atlas, people are starting to do what they should be, and trusting each other to survive.

The main event of the episode is the union of General Ironwood and Robin, who address Atlas together over the broadcasting system. Their announcement: revealing the existence of Salem, and her relation to the past attacks on the kingdoms. This changes the whole ball game, successfully unifying Atlas together, and they now can trust both Ironwood and Robin together.

We jump back and forth between the Huntsmen as they evacuate civilians and defeat the Grimm. Elm shows off just how powerful she is by single-handidly throwing a Megalith Grimm skyward, and later blows up three more with her surprise missile launcher. Jaune shows off his often forgotten leadership skills by calming civilians and getting them evacuate in an orderly fashion. Those crosswalk morning sessions were worth this payoff.

The episode’s title alludes to the heavy use of baiting and setting up traps. Blake, Yang, and Elm used this against the Megalith. Ruby, Penny, and Harriet pull this off by taking of an alpha Megalith. Penny launches a Kamehameha attack at the Grimm, using a smaller blast to weaken its tusks, which Ruby then chops off, impaling the Megalith upon it. Penny is praised by the people of Mantle, securing her own exoneration as a heroine.

Ironwood and Robin’s message revealed the existence of the Amity Tower, which Tyrian and Watts now know about. Watts sets off to sabotage Amity, while Tyrian plots to rob Mantle of its hope by murdering Robin.

Cinder and Neo are also watching the broadcast. Cinder is surprised her comrades are attacking Atlas rather than Vacuo. She orders Neo to find Oscar and obtain the Relic of Knowledge. A pouty Neo transforms into Ruby, assuming they planned to target her. Cinder reiterates that they must gain power first before getting revenge, wishing to go after the Winter Maiden. Seizing the Relic, the Maiden’s powers, Oscar, and Ruby, would ensure Cinder’s victory and get her back into Salem’s good books.

Tyrian corners Robin in an alley way, but while this may look like the end for her, it turns out to be a trap. Qrow and Clover appear to back up Robin to defeat the psychopath. Interestingly, Clover states that Robin isn’t the only one seeking revenge on Tyrian, though it is never expanded upon.

Watts flies to the undefended Amity Tower, noting it has yet to be completed. Just then, all of the security doors slam shut, Ironwood addressing Watts. The whole thing was a trap. Ironwood deliberately mentioning the tower as being complete to lure Watts to him. The groundwork for a truly epic battle is laid: Ironwood does a superhero landing, while Watts chucks his briefcase away in preparation for their brawl. Using his techno-rings, Watts takes control of the arena’s battlefield, summoning the gravity dust-laden zone, which we never got to see in Volume 3.

Hold on to your hats, RWBY is rocketing towards the finale of its seventh volume, and all bets are off for what may happen.