Home » Crow Song is a Colourful Mesh of Art, Stories and Clichés

Crow Song is an anthology that explores the theme of rebirth in several different shades and cycles through each strip with one powerful statement after another. Written by Tony Vanraes and lettered by Rob Jones, Crow Song is an enjoyable and thoughtful read. However, it does fall into a number of typical clichés, some appreciated, some not-so-necessary.

We open with The Immolated Lady drawn by Theo Brenni; a story catalyzed by themes of race and colonization, and tells the tale of a victim’s journey to revenge. It starts off slow and confused with constant movement between past and present, before it fully reveals itself as the story draws to a shaky a close. Splashes of black and white smoothly transitions the reader from present events to flashbacks, using art as a simplified exposition that is effective in conveying motives and intent in a quick span of few pages. While the internal dialogue can at times be a little too expository, the unexpected twist on the concept of change, cycle and morality breaks through the typical and offers a pleasant surprise at the end. The Immolated Lady is a fantastic opener for this particular collection, and an even more intriguing story all on its own.

The Contract is an excellent follow-up, covering similar topics of reckless land-grabbing and race. It fluctuates between beautifully crafted scenes by Bentti Bisson of political discussions, and the war-torn land of Astrere. The overall writing is riddled with clichés such as the repetition of the word ‘pride’ which signals a lack of confidence in its own allusions. However, it shines in its use of dialogue to create contrast and subtle parallelism, accompanied by the clever presentation of red and blue colors to transition between negotiation talks and the events occurring outside. In contrast to its predecessor, the ending of The Contract is a little rushed and would have benefited from further exposition. Uncertain storytelling aside, it is still visually stunning with enjoyable text, and a strong instrument to the overall production of Crow Song. 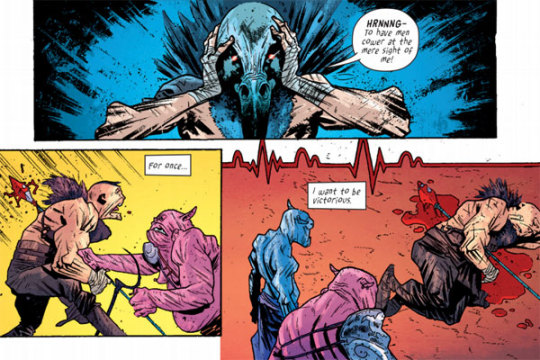 While the theme of rebirth has been sprinkled noncommittally throughout The Immolated Lady and The Contract, it is most prominent in Hatchling. In this particular title, we follow a single man’s pursuit of greater power as he tackles headfirst adversaries that dare belittle him. Vanraes performs his best use of narration in this anthology in Hatchling with texts from the past and present panels complimenting each other to create a cohesive narrative alongside edgy drawn art by Justin Mason. Similar to The Contract, Dee Cunniffe makes use of red and blue as transition colors, but accents the piece with splashes of electrifying yellow to indicate quick snaps of violence and impact which is especially helpful in creating contrast. An excellent example would be the panels that depicts the main character’s death which is perfectly juxtaposed against the line, ‘For once…I want to be victorious’. While it still suffers the inherent use of cliché and obvious dialogue found within the anthology, it is easily forgiven due to the visual strikes of subtle symbolism. Hatchling is a more fulfilling piece that balances its visual expression alongside well-crafted dialogue. 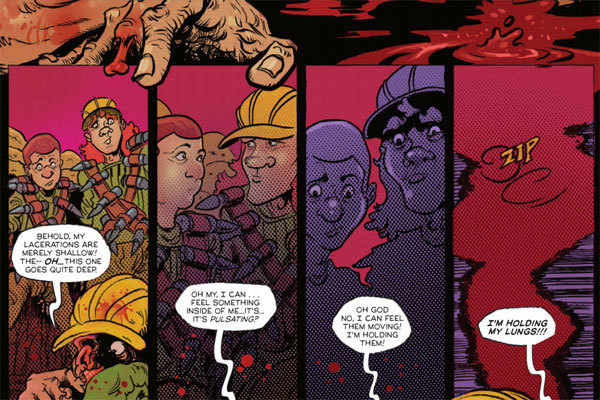 Squires is the perfect closer to Crow Song. It is the most vibrant piece, and fleshes the characters out more so than any of the other titles, cutting through the bleak atmosphere the anthology has set so far. Circumstances have brought Danny and Jack to become squires of Wolfgang Bloodstorm in the midst of an unexplained war, and they follow along for the ride—clueless and curios. The tone of Squires is light-hearted satire burdened with the weight of battle and destruction. Its charm is a direct effect of its focus on characterizing rather than storytelling, heavily enhanced by the detailed art style of Chris Anderson and explosive display of colors by Darren Stephens which awards the characters expressive display of thought and emotion. It ends the anthology with a single ‘To be continued?’; the question mark does not bring as much intrigue, but does convey a sense of uncertain finality and amplifies the satirical mocking tone of the overall strip. Squires, regardless of its dim-seeming ending and the unanswered question of the ‘To be continued,’ is a satisfying end to Crow Song that I very much enjoyed.

Crow Song is all about evolving into something new and different, whether it be at the stroke of a particular traumatic event, or a change forced upon the characters by other characters. The anthology breathes the theme of rebirth in several different forms, and each form progressively becomes more vibrant and overt as you go through each strip. I do believe there is a lack of subtlety in the text, and while it is helpful to have queues of symbolism imbued within the dialogue, the art in this particular anthology does a perfectly good job of alluding to certain metaphors. That being said, a little less reliance on expository clichés would have made this perfectly decent anthology into something fantastic.

Find yourself intrigued by the colorful display of comic ballads in Crow Song? If you do, you can buy this anthology from London’s Gosh Comics, Harrogate’s Destination Venus, Travelling Man in York and Leeds, and Belgium’s World’s End Comics or Mekanik Strip. You can also email Tony directly via tonyvanraes@gmail.com. Once you’ve bought a copy, send us a tweet on Twitter or a comment on Facebook of what you think!