Issue #2 of No One’s Rose starts with a striking image from the previous issue, and the same image that emblazens the comic’s cover: the Drasil insurgents wearing their sinister flora masks. As the first issue left it, the Drasil rebels were storming a parade in the top level of the biodome where our protagonists, Seren and Tenn, are also trespassers.

No One’s Rose #1 introduced us to a sci-fi world with a split moral centre – split between the proletariat people at its root and the ‘greater good’ of pooling all its resources to revitalise its environment, led by the PELU organisation at the top. This first instalment impressed the debates between anthropocentrism and ecology, and specifically then, a binary with no immediately clear ‘right’ or ‘wrong’. With an appropriately chaotic entrance, the Drasil and issue #2 disrupts that binary and further muddies the morality of its heroes’ story.

The Drasil are central to issue #2. Even in passages that the Drasil are not present, they and their actions are what characters mostly discuss. This rebel group aligns with both protagonists’ stories, Tenn and Seren, since they all to an extent want to restore and protect the ecology around the dome. Contrary to Tenn’s goals though, and conflicting with Seren’s, the Drasil seek to abolish the hierarchy between man and nature completely. The Dresil intend to unite man with the ‘symbiotic real’. Rather than uphold humans’ guardianship of the world, like Tenn and PELU, the Drasil hide their faces and reject their status as humans altogether. 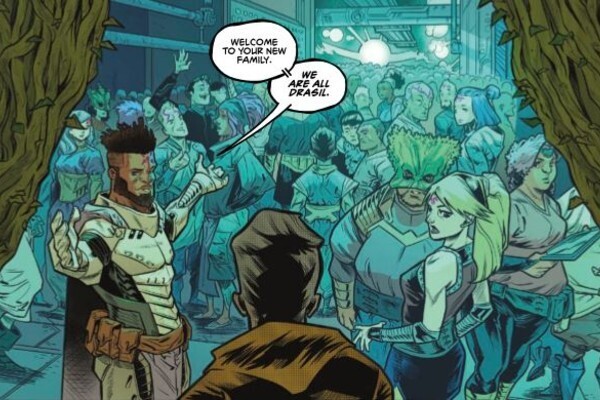 A striking aspect of the Drasil’s presentation in the comic, that illustrates this alignment with nature, is a spared use of the colour green. While Raul Angulo’s colours are as lush as in issue #1, #2 keeps all the strong greens to the Drasil, their masks, their equipment and their base. You’ll notice once Seren and Tenn escape the immediate chaos of the sequence at the parade, the city is full of vibrant oranges and purples: all the green disappears. The colour green is removed from as many passages as the Drasil are absent throughout the issue.

When the reader and Seren do finally see their secret hideaway then, it’s a striking sequence – hidden in shadow, the Dresil base is filled with a vibrant green overlay of neon light, and every member inside wears a bold green mask. When we see the Drasil again they are truly living up to being invisible, hidden, one with the green nature outside and around them.

To punctuate this change too, plants in other parts of the issue have a soft blue or yellow tint. There’s therefore an implicit sterility to plant life inside the biosphere. Issue #1 had the hard job to dazzle us with No One’s Rose’s beautiful natural utopia, so it could only allude to the sterility of the setting. Issue #2 shows the series’ keenness to complicate that.

‘Green’ is naturally the centre of the story – plantlife is the world’s technology, it’s magic and the centre of all its debate. Where the colour green is used, then, signposts the focus of the story. It’ll be curious to watch whether this technique affects the art of future chapters.

It’s worth mentioning too that one passage takes place in a disparate new location – the Snag. This location complicates the characters’ idea of ‘nature’. The Snag is full of natural colours, browns and golds, and bright glowing spores fill the air. However, this area is quite literally the dome’s dump. Hidden from the upper world, it’s just the location where Seren works, where Tenn meets with him for one sequence. The inclusion of a setting like the Snag enriches the world of No One’s Rose. It provides another level to the dome, as well as new dimensions of ‘nature’ besides the Drasil’s vibrant green bio-organic weapons and the decorated plant life that adorns the city street. This nature is unremarkable to the characters fighting for its protection.

Issue #1 of No One’s Rose introduced a binary, personified by our heroes Seren and Tenn, and by the end of this second chapter, the Drasil have challenged the views of them both. Rather than focus on the debate of the first issue, the series has opted to quickly complicate where the protagonists’ loyalties should actually align, by relocating the story in a slightly more complex world.

You can discover more about No-One’s Rose from Vault Comics. Have you been journing into the eco-madness of the comic? Let us know in the comments section below or send us a Tweet!