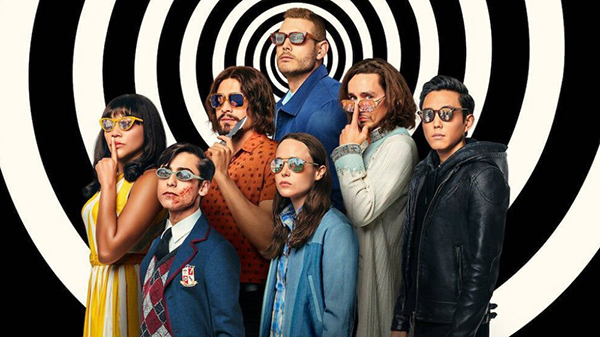 Ah, Umbrella Academy. A show constantly on the precipice of going completely off the rails while maintaining just enough coherency for a wildly fun ride. Season 2 brings much of the same with its time shenanigans, super power reveals, an imminent apocalypse and a distinct over reliance on upbeat pop songs to convey irony, but it makes some renovations. The new setting allows the show to inject fresh elements into the Hargreeves’ narratives. Several key characters get radically course corrected. These character changes make this season a marked improvement over season 1, but Umbrella Academy’s signature style, its quick-pacing, bloody super powered action, irreverent tone and convoluted plotting remains fundamentally the same.

Season 2 begins with all of the Hargreeves landing in the same alley in Dallas, Texas all in different times in the early 60’s. 5 (Aidan Gallagher) appears last, a handful of days after JFK’s assassination to discover the timeline has been altered. The USSR has invaded the United States. Nuclear annihilation ends the world. Despite the Hargreeves’ attempts to thwart it, they have brought the apocalypse to the 60’s with them. In another last-ditch effort, 5 sends himself a week back to try and once again unite his family to save humanity.

Umbrella Academy, in a delightfully strange choice, leans into 5 as both a driver of the plot and the de facto leader of the family. I find Gallagher’s biting, frantically frustrated performance constantly compelling. 5’s backstory, a 58-year-old man in a 13-year old’s body and a ruthless, pragmatic time assassin, makes him a unique creature. Season 2, and the 60’s, hardly change him, since he remains both a veteran time traveler and consistently entertaining.

Besides 5, various distinctly 60’s elements alter the roles of each of the other Hargreeves. Vanya (Ellen Page) loses her memory after getting hit by a car right when she got to Dallas. The woman who hit her, Sissy (Marin Ireland), takes her into her family’s home. Over time she and closeted, married Sissy fall in love and make plans to run away together. Sissy’s evil husband gets in the way, hunting and threatening them. Vanya coming out feels like a natural progression of her character, and a certain improvement on her last, straight relationship arc.

Allison (Emmy Raver-Lampman) marries civil rights activist Ray (Yusuf Gatewood) and gets involved in the movement. This solves, in an elegant, relevant way, last season’s awkward Allison-Luther (Tom Hopper) pairing. Allison’s participation in the sit in at the diner, and the police’s terrifying intervention, inspires and then devastates. No other moment in the show’s run has the same impact.

While I appreciate Umbrella Academy depicting Allison in the civil rights movement and Vanya’s coming out, and the horrific racism and homophobia that follow them, they both miss something. The 60’s setting creates a degree of removal from the viewership that allows these stories to escape subtlety, never Umbrella Academy’s strong suit. It would’ve benefitted from connecting Allison and Vanya’s oppressions to the broader plot. They stay largely insulated until the show no longer focuses on injustice.  Ray and Sissy have little to do with any significant character outside their love interest. Both relationships end with the season. Season 2 shows much more interest in these topics than in the last one, but there remains substantial room to grow.

Diego Gets Deconstructed And Klaus Leads A Cult

This season significantly improves Diego (David Castaneda). He becomes obsessed with preventing JFK’s assassination, a result of his hero complex caused by his father’s emotional neglect. I loved how the show backed away from the discount Arrow approach they took to his crime-fighting in season 1. It scraps the cliché tragic hot-head hero trope to focus on the absurd psychology of his vigilantism. The way his father (Colm Feore), still alive in the 60’s, verbally eviscerates him and his quest to prove himself stands out as one of the most brutal and well-written scenes in the season. His relationship to Lila (Ritu Arya), with their mutual intensity, shows signs of real chemistry. Her reveal as The Handler’s (Kate Walsh) daughter makes her unlike most Umbrella Academy love interests, significant outside of her relationship with one character.

In season 1 Klaus’ (Robert Sheehan) desperation and impulsiveness made him hilarious and relatable. Sheehan gave the best performance of the show. He was an isolated, gay, many times traumatized drug addict who constantly talks to the ghost of his dead brother, Ben (Justin H. Min). Season 2 mishandled him. He lost some of his (immense) charm becoming an exorbitantly wealthy cult leader. We don’t get to see Klaus scramble for drugs or steal from his family. He doesn’t feel lost or alienated in the same way. The humor of Umbrella Academy remains hit or miss, but the cult bits, despite Sheehan’s commitment to all of them, grow stale. The same three jokes get recycled, all about Klaus not caring about his followers. Thankfully, his relationships with Ben and Allison lend weight and complexity to his character. Despite Klaus’s superficiality, he has more genuine affection for his siblings than any of the others, particularly in Season 2.

A Strange, Powerful Story Of Heroes And Family

This season makes character adjustments that are largely positive but ultimately, Umbrella Academy remains Umbrella Academy. From the breakneck pace of its convoluted plot, to the end of season time travel cliff-hanger, from the cool, gory action, to the lighthearted, occasionally hilarious dialogue. Reginald’s utter awfulness and the way 5 seemingly tells us twice an episode how many days left until the apocalypse. I’ve never watched a show quite like this one, so frenetic and indulgent and outlandish. Umbrella Academy’s greatest strength too, remains. A family of characters who all bring something delightful, unique, relatable, touching or even inspiring to the story, whose complex relationships bring the most resonant elements of each other’s characters to the fore. I can’t wait till season 3.