Home » “Mr. Doyle’s Class Presents: A Study in Scarlet” Is Playful And Wonderful 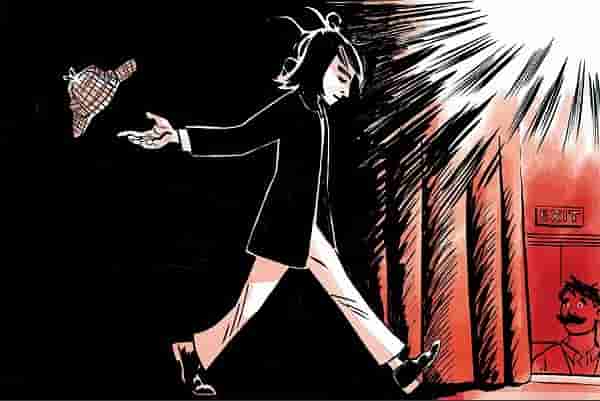 Mr. Doyle’s Class Presents: A Study in Scarlet is a fun and adventurous retelling of the Arthur Conan Doyle’s classic. Matt Hardy writes alongside art and letters from Russell Mark Olson and Rob Jones, to tell through a group of students – and their aptly named teacher Mr. Doyle – the story of A Study in Scarlet. They go through the motions of rehearsing the play, and learning about the series of events through their performance. This adds a fun and vibrant spin to the old time classic; the kids’ eagerness to learn and investigate is infectious, and the teacher’s indulgence of their different takes and opinions is endearing. While it oversimplifies the novel, it doesn’t come at the cost of quality. Rather, it offers a different medium from which readers can consume the same story.

Numbers and titles separate the graphic novel into different parts. The first part is titled “You don’t know Sherlock Holmes, yet”. It’s one hell of an opening statement to see at the beginning. It also pays homage to the first time Sherlock’s name appears on print. If one is familiar with Doyle’s A Study in Scarlet, one will most likely know the contents of the comic. But that in itself does not take away from the enjoyment of it all. One may find that the parts cut off at the most intense moments. This artfully hooks readers in with well-drawn sly faces and curious excitement from the ensemble cast. As a method, this makes one feel as if they are learning alongside the characters.

There is also an intermission which provides little details and information, adding to the immersion. The roleplay and the cast never breaking character help readers get a really good grasp of the world within A Study in Scarlet. It also adds an extra dimension of foreshadowing. Even outside of that intermission, Mr. Doyle continues to educate students constantly asking questions. This furthers world-building while still maintaining that façade of fiction.

The art style uses thick pen lines with casual shading instead of clean perfect strokes. Historical notes are in soft pencil sketches in black and white. Faces have minimalist detail yet they exhibit a lot of personality. Each character have their own unique identifiers; from the shape of their nose, their hairstyle, to the curve of their dotted eyes. In contrast, the set and the world are drawn in great detail. There is so much careful appreciation and consideration put into the Victorian builds and streets. Even sets inside the different rooms are so fascinating to look at. This allows the shift between the stage to the world within A Study in Scarlet to remain so seamless.

Save for the historical notes, the comic is washed in monochrome scarlet, with darker shadings in black. This reflects the title – another homage to Doyle’s work – and is a reference to the main character, Scarlet. Use of shading helps elucidate character and develop stories and scenes. Some shades in particular even add nuance, not just to Scarlet’s character. It also highlights that same kind of underlying chaos within Sherlock himself.

Scarlet is an excellent protagonist, and the most fitting character to play the role of Sherlock. She has his all-too-knowing smile, and the playful glint in his eyes down pat. The outfit looks great on her and she is a lot of fun to follow around. I like the whole schtick of her being a girl that her castmates don’t approve of. She continues on without a thought to their opinions in the least. This really showcases her focus, and that she is in fact undeterred like Sherlock once was.

The theme of “anyone can be anything” is well-sewn into the core of the graphic novel. It’s brought up as defense for Scarlet playing Sherlock, and is of focal interest when Sherlock was tricked in the play. It’s an interesting use of parallelism between the two characters. But it also acts as a form of foreshadowing, and adds vulnerability to both Scarlet and Sherlock. The line “Jefferson Hope didn’t want to be a killer. He let the bad things that happened to him – to those he cared about – turn him into a monster,” bleeds directly into this notion. It’s an excellent closer to the play that pairs well with the opening of “You don’t know Sherlock Holmes, yet”.

Mr. Doyle’s Class Presents: A Study in Scarlet is a really good read, and a visual marvel in terms of art. It’s fun and easy with lovable characters and plenty of references. The message itself, of anyone can be anything, is well-played and executed. Overall, it’s just something nice and easy that can cut through the tension of the actual novel. My favorite scene is definitely the flash at Sherlock and Watson in greyscale amongst the red of the audience. It’s such a perfect curtain call for the overall graphic novel.

Find Mr. Doyle’s Class Presents: A Study in Scarlet intriguing? You can find it here. Let us know if you enjoy by commenting down below or sending us a tweet at Twitter!