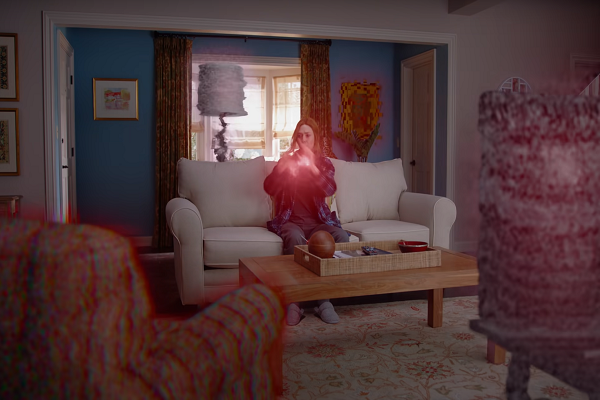 As episode three and four of WandaVision progress, a question arises. How far is too far to go for a loved one? I am not entirely sure, but erasing a whole town from existence and effectively enslaving it’s denizens, might be it.

Continuing from the finale of episode two, there is colour in this world as episode three begins. It also seems to move forward yet another decade in time. Oh, and Wanda is very pregnant. As her pregnancy develops at an alarming rate, Wanda spends most of the episode avoiding others for comedic effect. The pregnancy jokes ran for a bit long in my opinion, though it did showcase Wanda’s powers going haywire.

While Wanda is occupied with giving birth, Vision speaks to Herb and Agnes who are just outside the house. They both seem weird and even hint that Geraldine doesn’t ‘belong’ there, revealing she doesn’t even have a house. Vision seems confused and unaware of what they could possibly mean. There are very strong indications that while the townsfolk are unwilling players in Wanda’s show, Vision himself is entirely unaware. In a moment of clarity Agnes seems horrified at the notion of Herb revealing to Vision what is happening.

Meanwhile inside the house, Wanda has given birth to twins. As Wanda tells Geraldine about Pietro, reality strikes and Geraldine reveals she knows about Ultron. Wanda immediately questions how she could possibly know that name and what she is doing there. Wanda in this scene isn’t just powerful, she is down right scary. By the time Vision enters the home, Geraldine has been launched into the real world.

Going into episode four, Geraldine is no more. She is actually Monica Rambeau, daughter of Captain Marvel’s best friend Maria Rambeau, and a Captain in S.W.O.R.D. (think S.H.I.E.L.D. but for outer space). The opening scene is something I have been wanting to see since Endgame released and something I felt was glossed over in Spiderman: Far From Home: the victims of the ‘blip’ returning into their lives after a five year absence. The absolute horror and panic that must have filled both the ones returning and the those who remained. The confusion of all hospital workers and people realizing they literally came back from the dead. This was all portrayed expertly in this scene and really did a great job of changing the tone of WandaVision. Yes Wanda’s reality is “peachy keen,” but the world outside certainly isn’t, that much is clear.

Throughout the rest of the episode WandaVision sets out to end the facade of the first three episodes by exposing as much of the Wanda world to the viewers as the outside world knows. Which granted isn’t a lot. A great moment here are the returns of Jimmy Woo (Antman and The Wasp) and Darcy (Thor, Thor: Darkworld). Which is amazing! The thing I most wanted from the Disney+ Marvel series was for minor but memorable characters to return and make a bigger presence. Their return is really strengthened by the simple fact that they were true to who they were in their own franchise, yet also contributed to the story. Darcy quickly figures out how to watch WandaVision (she really didn’t want to pay for a Disney+ subscription). While Woo helps with her plans and just overall remains an extremely likeable and relatable character.

By the end of the episode, the viewers are now caught up to the outside world in terms of the Wanda phenomenon. Rambeau returns to reality, and as we finally get to witness how she was evicted from the sitcom (courtesy of Wanda horrifically tossing her through many walls and fences) she reveals that Wanda is the warden of the laugh track prison. Now the questions for the series going forwards are; What exactly drove Wanda to do this? Did she actually return Vision from the dead or will he die again once the jig is up? This certainly seems to be the case as she saw him dead.  Though possibly the biggest question of all: how do you stop the Avenger who can not only force Thanos into bombarding his own forces to escape her clutches, but apparently also rewrite reality itself?

Oh and how did Woo do that magic trick with the card? He is truly a Dr. Strange level wizard.

Are you liking WandaVision so far? Let us know in the comments or send us your thoughts on Twitter!