Home » Gods, Goddesses, And More In “Gabriel”: In Conversation With C.K. Riley 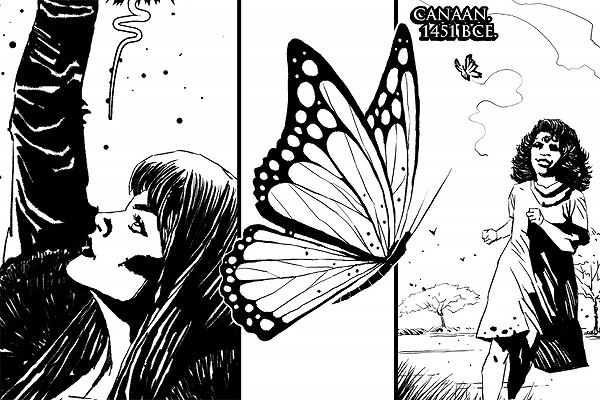 Gabriel centers around the Archangel Gabriel, and explores some of the history and mythology surrounding ancient pantheons of gods. A fascinating concept to explore, we got the chance to review and converse with series creator, C.K Riley.

A Place To Hang Your Cape: So tell us a little bit about yourself and what you do?

C.K. Riley: I’m a screenwriter, playwright, and comic book creator; Gabriel is actually the first comic that I’ve written and produced. I work at Sony Pictures here in LA, in Culver City. I’ve worked in film and television for a number of years. I started at Sony back in 2002, and took a bit of a break in 2011. I moved to New York City, wanting to get involved in theatre and broaden my creative horizon.

Four years ago in 2016, I moved back to LA to get back into film and television. This is because I started developing this massive IP called the Shatterstar Universe. Gabriel is the start of this whole IP. It allows me to play in the sandbox that I’ve always wanted to play with. I’m dealing with gods and goddesses, mythology and folklore, and all that. I’ve been writing since probably about four or five years old. And so now, I’m just doing it professionally.

AP2HYC: What inspired you to write Gabriel?

Riley: I’ve always had – even going back to childhood – an affinity and a love for fantasy. But mostly world mythology. I grew up on Greek mythology – reading all the stories of the Iliad and the Odyssey, and all of that. But then as I grew up, I got more heavily into all aspects of world mythology. The Norse, the Chinese, the Hindu, Taoism, and Celtic religion. The ancient Celtic tradition played a big part in Gabriel, which you’ll probably see; the first issue has a lot of Celtic mythology.

What I wanted to do with this project is tie all of these ancient religions together in one cohesive story. And as a result, you get one giant story. Hopefully, it makes sense. It’s entertaining, but also I’m hoping that it’ll educate a little bit. When you read Gabriel, you see a lot of editor’s notes that sort of highlight certain things in the story that are from real world mythology. So that inspired me to do it – to dive into world mythology and retell those great stories because those are our origin stories. It was really important for me to retell them and bring them back to life.

AP2HYC: So for this particular project, how did the artist and letterer get involved?

Riley: Well, through Deviant Art. I put up an ad—this was probably a couple of years ago—on DeviantArt, and put up a posting about what everything was about and what I was looking for in the art style. I found this artist, and he sent me some samples. Looking through his portfolio—his art was amazing—his name is Branko Jovanovic. His artwork is so expressive. It’s really dark; has that dark kind of tone – and that’s how I want it for Gabriel. Because it’s in the ancient world, and the ancient world was a very dark place.

Lucas Gattoni, the letterer, also submitted some work on DeviantArt. He was able to letter things in a way that wasn’t intrusive of the artwork. He also taught me how to be a better comic book writer, so that the balloons weren’t so massive. I just couldn’t be happier with the team I was able to put together. Because the stuff Branko sent me was in black and white, I just thought that’s what I wanted it to be. Black and white instead of color. I think it works. It looks really good on the shelf too, in print at my local comic book shops. There’s something about it that looks kind of ancient, the way he drew it. I’m very pleased with the artwork.

AP2HYC: A recurring motif you use is the North Star. What does that signify for you?

The North Star was important to pretty much every culture on earth in the ancient world. Amongst the Taoists in China in particular, it has a very special meaning – the Zi Wei star. If you look up at the night sky in China at the Taoist White Cloud Temple in Beijing, the North Star is directly above it. All the other stars and planets revolve around the North Star. That’s how it looks from our perspective here on earth. So, from a mythological standpoint, that was the perfect focal point for this entire fictional universe that I’m creating.

AP2HYC: Who or what are some of your comic book inspirations?

Riley: Well, Alex Ross who drew Kingdom Come was the big inspiration for not just Gabriel, but for pretty much this whole Shatterstar Universe. I know you had asked earlier what was my inspiration; I had kind of said it was just mythology and fantasy, and growing up with that. Kingdom Come, which was a graphic novel that was published in 1996, was the first graphic novel I ever owned and read straight through. It had a huge impact on me, both as a person and as an artist. And the artwork that Ross had drawn in Kingdom Come is what I wanted Gabriel to look like. I wanted it to be that impressionistic.

Another big inspiration is Neil Gaiman. When people ask me who’s my target audience for Gabriel, I would say Neil Gaiman fans. Because it’s fantasy for grownups. And so, I would definitely have to say Ross and Gaiman, with a special shoutout to Jonathan Hickman. He has also written a number of great Marvel titles over the years.

AP2HYC: What comes next for you after Gabriel?

Huge thank you to Riley for such an absorbing and interesting talk! If you loved reading this and you’re interested in learning more about Gabriel, the comic can be purchased at Comixology and Apple. Have any thoughts on the comic? Sound off in the comments or tell us what you think on Facebook or Twitter!