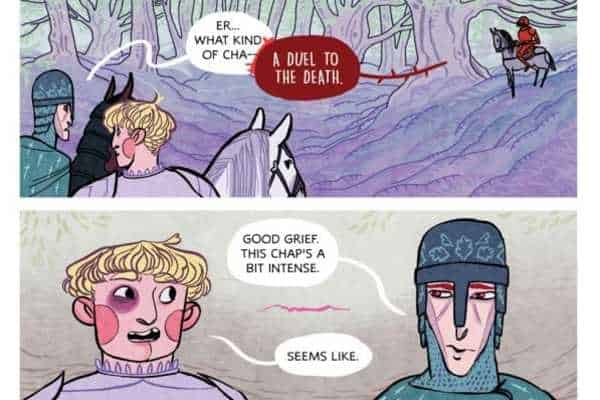 The Beechwood Helm revisits the contexts of King Arthur’s round table; every knight’s their own hero with a monster waiting in the woods. This exact story follows Perseval and Hyacinth, a pair of knights that encounter a masked aggressor and its magical suit of armour in the forest. This armour brings a curse when Perseval takes it for himself – a curse that only love can defeat.

Wilson taps into the inherited whimsy of Arthurian legend, this imaginary space that’s endured for centuries, and reanimates this lore to tell a refreshing story of vulnerability and strength through love. As much as those stories have been reinterpreted through prose or verse, that spellbinding whimsy has never come out quite like this before. Wilson takes full advantage of comics as a storytelling medium to reframe familiar archetypes and myths.

Wilson plays with distance. She consistently frames the monstrous knight as tiny between the trees, so that even as it grows closer, the figure never quite overshadows or intimidates Perseval and Hyacinth. Wilson’s monster isn’t a threat, so much as it’s just posturing. Violence and sword fights throughout the story are given the same treatment. Knights don’t take up a lot of space in these wide panels that highlight their posturing. Fights are messy and desperate or take place entirely between panels. Splash pages are reserved for quieter moments, more emotional twists, as these feckless fights are just the noise in-between.

It isn’t until that monster becomes intangible – when Perseval takes its bristly red armour – that the sense of a real threat spreads through the comic. Skim through the pages of the book and you’ll see the cool purples and blues of the wood at the start morph into the same bright red of the monster’s helm, into the black and crimson of Perseval’s nightmares.

Perseval and Hyacinth are also both a far-cry from stoic knights. Wilson gives her characters’ expressions a Disney-like elasticity. She utilities the expressiveness of cartoons to imbue her heroes here with a more dextrous set of emotions. This makes the opening of the book very funny, to start with. This expressiveness also gives rise to a real sense of vulnerability from Perseval, who’s emotional descent drives the narrative. You can chart Perseval’s deterioration page-to-page, Wilson gradually making Perseval’s face more weathered and gaunt.

Though skilled in a fight, Perseval is more emotionally vulnerable than your typical modern knight. In The Beechwood Helm his descent is laid bare in the colours and shape of the comic. When you reach the story’s emotional end therefore, the climax feels as poetic and complete as in the end of a fable.