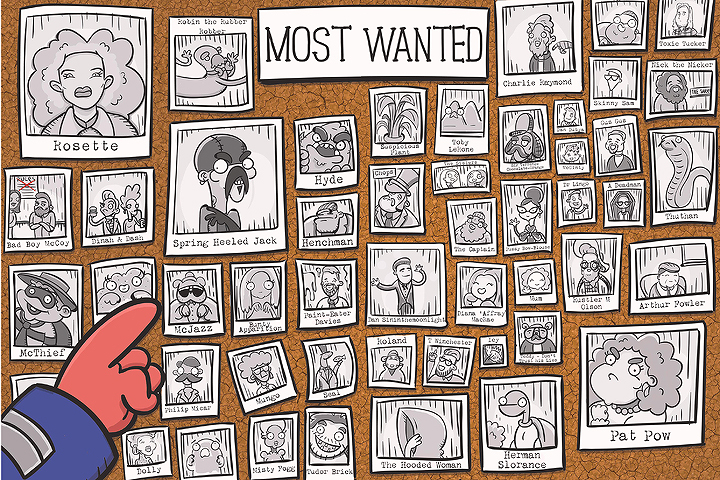 The Misadventures of Spring-Heeled Jack by Tom Sparke is light, casual, and full of puns. Sometimes, the humor can be very on the nose. But that’s okay; it’s just one of those things that doesn’t require too much brain power to feel like you’re in on the joke. Which is very on-brand for the format the series is going with. There are parts that genuinely elicit a soft chuckle out of the readers, but nothing too extravagantly funny and out there. In fact, it’s an overall relaxing read. I imagine it being a comic perfect for the back of newspapers. After reading all the terrible and morbid things happening in the world, you have this palate cleanser. While it continues to teach valuable lessons, it still provides an escape from the dread of reality.

We begin with #1, where we meet Spring-Heeled Jack. He’s a thief, and he likes to steal from the rich and redistribute their wealth; a complex subject told in a fluffy piece. In #2, the police catch Jack. They take him into custody, and then he escapes with the help of Tina. This presents a monster-every-week episodic format for the issues. Jack, our main character, is a pretty loveable guy. Wrong side of the law sure, but definitely on the right side of humanity. His character design is pretty simple. But Sparke still manages to give him a unique look using tattoos, a very recognizable moustache, and of course, his forever posture. He’s the glue that keeps the story in-tact.

The narration is much like a tale by Doctor Seuss. Still, the lines are too wordy to be any sort of poetry. It’s silly, like a nursery rhyme, and the art is just as comical, with intext-references within. Funny little examples include a newspaper called ‘The Olden Times’, and a hospital named ‘Hospital for the Easily Startled’. Although seldom and far in between, the character speech bubbles and dialogue sometimes adhere to the scheme. While I appreciate the effort, the inconsistency is the format’s downfall. Because it’s not always the case of the dialogue following the rhyming pattern. It is almost a disturbance when the characters veer off from the expected words and sounds. If the rhyme was confined within the narration, that would be easily forgivable.

Page layouts are pretty straightforward. Most pages are composed of either single splash pages, two-page spreads, or comic strips of two to six panels. While Sparke does use text boxes and speech bubbles, he doesn’t use them for narration. This leaves the text floating messily within the empty spaces of the art. As a result, the text often runs too big and too long, taking over several panels. More use of text boxes could solve this, as well as using different colors to differentiate each purpose. Backgrounds use basic shapes, such as tall bricked-buildings, wallpapers, windows, and hearts. The colors are mostly neutral, pastels and matte, with nothing too dominating or bright. All of these things complement the story.

I do like the character pages; single isolated pages that sporadically appear throughout the comic. Here, we can truly appreciate the character designs and get to know them better. While this counts as too easy of a method for exposition, in this particular case, it works. It adds a fun little something extra for the comedy to work with. One of my favorites is Tina and PC Bob Robert’s pages being so close to each other. In Tina’s dislikes it writes “idiots”, and for PC Bob Robert, his description specifies him as an “idiot”. Not only is that funny, but it’s already building relationships and connecting dots. Unfortunately, these pages don’t carry over to #2. Again, this is just a mark of inconsistency to the overall series.

In conclusion, I like The Misadventures of Spring-Heeled Jack. It’s a lot of fun, and eases my worries. Also, it’s very hard not to say anything about the back of the comic. These are illustrations of the Kickstarter backers. It’s just something nice to see. Because it makes readers feel like they’re included in something special—that they’ve contributed to this, regardless. And that’s kind of really nice and thoughtful. I’m looking forward to reading more.

Would you like to relax and have a fun time with The Misadventures of Spring-Heeled Jack? You can take a look at where to purchase and all other info via its Kickstarter page. Don’t forget to let us know if you enjoy it by commenting down below or sending us a tweet at Twitter!