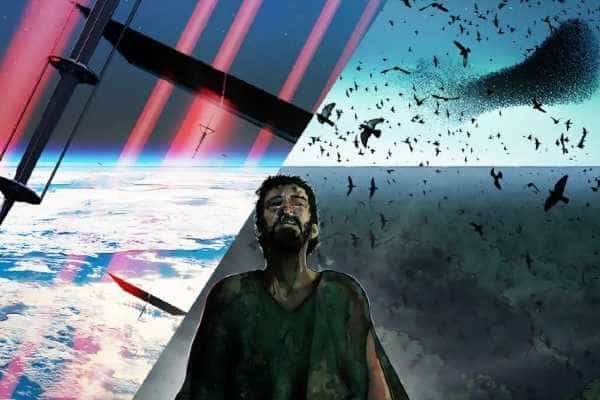 Arks questions how far would we go to survive? As a person, a partner, and as a species.

That question is put to the characters Joseph and Lilith in the wildest possible setting: a new world. An empty planet populated with vibrant new wildlife and ecosystems. Here they’re the new Adam and Eve.

That similarity isn’t unintended; the first half of Arks issue one retells the story through Joseph in the garden and his wife Lilith. Indeed, the setting of Arks is our own culture’s idea of a future Eden. The premise is based on a real modern theoretical method for extra-solar travel: ‘directed panspermia’. As Lilith explains in the comic, this method sees 36,000 genomes locked in a bacteria and a canister of that bacteria is then fired 739,920 astronomical units away from Earth. They’ll sprout and inhabit the planet, testing it’s waters.

A canary in a coalmine.

Both the art and the script for Arks are from R.J. Collins. There’s a real benefit to Collins’ taking the reins of both for this first issue. Returning to the first pages of the comic; there’s a synergy between the epic but practical, scientific nature of the premise and the sweeping epic panels bolstered by the comic’s characters. These characters are rendered in visceral detail. Joseph and Lilith are (naturally) completely naked.  However, they are also caked in their own blood, tears and snot throughout the comic. That’s not to also mention several gutted animals and sequences of violence throughout the story that are all depicted with the same sterile literalism.

Issue one of Arks goes a long way to set up the premise of the series and introduce us to the characters’ immediate situation. There’s clearly more story beneath the surface of the planet’s wild earth, and potential secrets between the two protagonists. With such an alien setting, there’s mysteries bound to remain for the next couple of issues at least, as well as suspicions around both characters.

It’s noted on the Kickstarter page for issue two that this premise took a decade to research and you can tell by the gravity by which the story’s told. Arks issue one begins an epic story at the far reaches of space and science.

For more information, check out the Kickstarter for Arks issue two. Then don’t forget to sound off in the comments or send us your thoughts on Facebook or Twitter!