Jupiter’s Legacy: A Politically Charged Superhero Series Mired by Flashbacks of a Quest for Superpowers 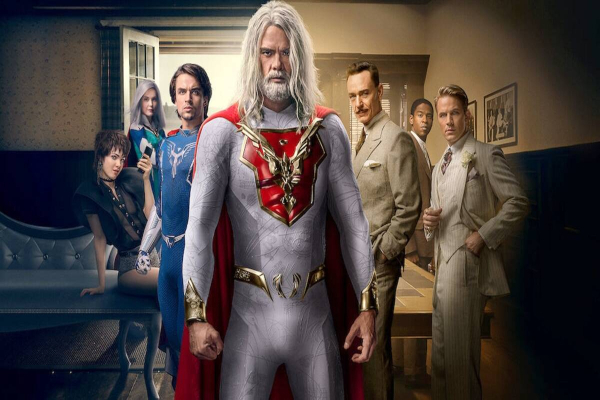 Home » Jupiter’s Legacy: A Politically Charged Superhero Series Mired by Flashbacks of a Quest for Superpowers

Where to start? I’ve had my eye on this adaptation for while, since Syfy announced a host of Mark Millar’s work had been bought by Netflix for potential adaptation. I admit I was surprised that this particular series was picked up for live action.

Jupiter’s Legacy, arguably Millar’s seminal comic book, is a sprawling series. It explores themes of division between generations, the clash of ideologies and family legacy, all set against the background of superheroes and underlined by a flashback Indiana Jones style quest.

The series focuses on the Sampson family and the strained relationships between Sheldon, played by Joshua Duhamel, and his tearaway daughter, Chloe (Elena Kampouris) and resentful son, Brandon (Andrew Horton) who trains to inherit the mantle of the Utopian from his father. Sheldon believes his code of no killing to be absolute, immutable which he tries to uphold even as the bad guys become more violent. This is not helped by his conniving brother, Walter/Brainwave (Ben Daniels) who believes superheroes should take a more controlling role in world politics. Meanwhile, through flashbacks, we see a younger Sheldon in the 1930s, coming to terms with his father’s shady business decisions and suicide following the Wall Street crash. His obsession in finding the source of his haunting visions leads him to a mysterious Atlantic island with a rag-tag group of friends and family, where they gain superpowers to become the original six superheroes.

Duhamel rather impressively balances both performances, as a naïve heir industrialist and a veteran superhero.  The elder heroic Sheldon is particularly interesting as he tries to lead by example, embodying a somewhat outdated set of moral principles to teach a younger, less idealistic generation of heroes to inspire greatness in humanity. Comic fans may draw parallels here to Mark Waid and Alex Ross’ Kingdom Come which sees Superman caught in similar circumstances.

Sheldon is a very thought-provoking character. In the current climate of Superman analogues, he stands out as a genuinely good moralled individual who struggles with the pressures of what society expects of him, even more with what he expects of himself. An interesting reinterpretation of the archetypal god-like hero.

Jupiter’s Legacy is a visual treat, making excellent use of choreographed fight scenes and special effects.  The costumes translate surprisingly well from Frank Quietly’s original artwork, with some much needed diversity injected into the cast. The aging makeup also works, allowing the younger and elder incarnations of the heroes to be played by the same actors. You really feel as though you’re watching a comic book brought to life. If you’ve come to watch another good old fashion romp in the superhero genre, with lesser known non-DC and Marvel characters, then you’re in the right place. The series also manages to believably recreate the 1930s for the flashbacks, with some impressive CGI to flesh out New York City after the Wall Street crash.

It should not come as a surprise that with an almost Hamlet-like uncle figure in Walter/Brainwave that there is a twist of treachery. Walter (played rather masterfully by Ben Daniels) is behind everything, cloning supervillain Blackstar and using him as the means of pushing Sheldon’s moral code to the limit, all to encourage public opinion in favour of more controlling, violent action against crime. While not a shocking revelation, it’s still interesting to see how decades of brotherly jealousy and rivalry with George/Skyfox (Matt Lanter) have hardened Walter into potentially the next great supervillain.

Jupiter’s Legacy, doesn’t pick sides however, focusing on different perspectives and asks, what do you think? Should superheroes have the right to decide what’s best for humanity, or should they be answerable to the law? The question is complicated by real world social and political context, so as Walter says “Nothing’s black and white anymore”, something that Sheldon can’t quite see. This becomes the subject of an interesting conversation between him and his therapist, Dr Jack Hobbs (Nigel Bennet). It’s not often you see a superhero in therapy, much less the therapist being a former nemesis.

However, Jupiter’s Legacy threatens to buckle under the weight of too many characters introduced too quickly and the disparate storylines in the juxtaposed modern age setting and flashbacks to the Union of Justice’s origin. The lack of transitions between these scenes becomes off-putting, especially with how short many of them are. But strangely, I’m not sure this storyline could have been explored had Jupiter’s Legacy been adapted into a film instead.

Perhaps the most frustrating part of this adaptation is the lack of stakes. By series end, the focus appears to be on laying the groundwork for future storylines, and doesn’t quite deliver a truly satisfying finale, since there’s no real climax. The predictability of Walter’s double-dealing nature contributes to this. The second frustration would be how the relatability of the heroes is compromised. It becomes difficult to care for most of the secondary heroes when many of them are almost begging for the right to murder criminals and supervillains, compounded by a likeminded public. There would be a lot more debate in the real world which isn’t explored enough.

Regardless, Jupiter’s Legacy is still an entertaining series, even if it doesn’t quite match up to its peers in the superhero genre. But if the slick performances and production value of a comic book brought to life continue into a potential season two, with a less saturated storyline, it may become a welcome addition to the pantheon of superhero shows in today’s market.

What are your thoughts on Jupiter’s Legacy? What are your predictions for season two? Who’s your favourite hero from the series? Let us know in the comments or on Twitter!