Home » Kinetic And Electrifying Surprises In “Dr. Love Wave And The Experiments” #1 To #2 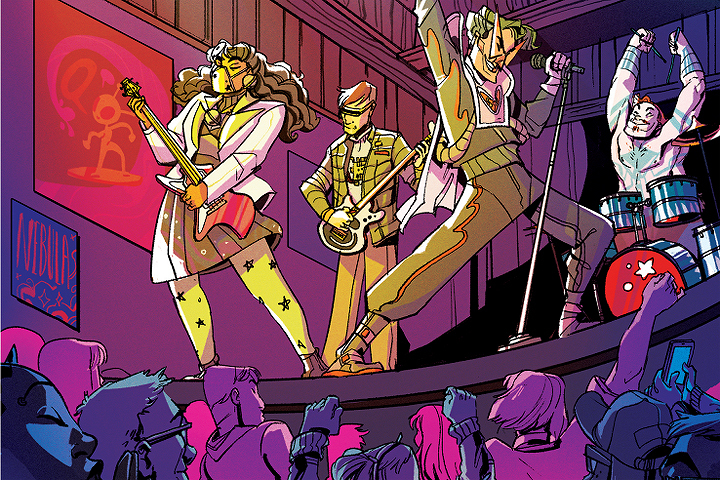 There’s something in the water—or rather, something’s consuming the water—in Madre Bay. Whatever it is, writer Greg Gustin and artists V. Gagnon and Kaylee Rowena are all too eager to tell you all about it. Dr. Love Wave and the Experiments follows Milt Summers, who recently lost his mom to cancer, and as a result, goes through his day-to-day life just getting by. But at night, he electrifies a small crowd of people with some sci-fi rock music. Meanwhile, strange things are happening elsewhere; the water’s draining, and there are aliens and androids afloat. This turn of events leads to the question of whether it’s time for Milt to step-up, or stay hidden in the wallows of his own loss.

#1 starts simple; minimal words let the art speak for itself. The characters go through the motions of waking up and going about their routines. This is where the divide starts—the disruption of routine on one end, and the carrying on as if nothing’s different on the other. In general, the narrative throughout both issues oscillates between the situation at Madre Bay and the life of Milt. This immediately sets the tone for the comic. The alternating scenes catalyze the early beginnings of conflict, establishing the main players of the plot.

Events and conversations are often told through text messages, phone calls, radio and television; emotions are expressed through sounds – as depicted by Joamette Gill’s lettering – and through written word. This carries onto #2 which again uses text messages as a flashback device. As far as storytelling methods go, this does a good job at isolating the important moments. It also showcases the personalities of key characters. Furthermore, the interception of text and dialogue creates another contrast; from the persona that Milt displays as a musician – how he acts around his friends and other people – and the softness and honesty that’s there within himself.

The best part of the writing are definitely the character dynamics and the delivery of exposition. The band in particular have fantastic banter. You’ve got these four very different personalities, bursting with sarcasm. The best way to relay their relationship to the audience is through their interaction with each other. It’s how they play off of each other, and the contrast in their different characteristics.

As for the exposition, one of the highlights of the comic so far is Milt’s dream sequence. Through that, the audience finds out about his mother’s death to cancer. How Gustin executes the reveal is perfectly balanced; he doesn’t dump an entire play-by-play of how she died. Instead, he illustrates how Milt is dealing with the aftermath. And when the issue crops up again during Milt’s conversation with Mika—it’s just natural; there’s no saying things for the sake of telling the audience about it.

In addition, the art is fantastic for Dr. Love Wave and the Experiments. There’s a lot of detail gone into every aspect of it to help with the storytelling and world-building. For instance, the simplistic panel layouts. These reflect the quiet boredom in the everyday lives of the band members; a heavy contrast to their musical personas. Another detail to note is the stylistic speech bubbles. It adds a touch of kinetic energy to the text and really highlights the different forms of relaying conversation. And finally, color is used to emphasize the emotions at play in every scene; from the psychedelic vibrance with allusions to monsters, to splashes of neon delivering light shows at the concert.

To be honest, there’s just something really mesmerizing about the art. It’s especially great when considering the fact that the first two issues have two different artists on the table. Because despite all that, there’s still a cohesive transition from one issue to the next. That said, Gagnon’s style tends to elucidate the musical and visual aspects of the comic better; the character designs bring the pages to life more. Especially the details applied to the costumes and clothes of each and every character.

Meanwhile, Rowena’s art is more cohesive with the tone and colors. It’s also fantastic at creating movement. Her art pushes the plot forward better without watering down too much of the details. The personalities, age and emotions of the characters are better depicted in this particular style as well. Both have their own strengths and weaknesses and fit the bill of the comic in different ways.

Overall, there’s something magical brewing in Dr. Love Wave and the Experiments. The visual energy is very Jem and the Holograms and Julie and the Phantoms. But there’s a sci-fi twist, and more heart than one would ever expect. It uses such a clever storytelling method through text messages, and the art is mesmerizing. All of that come together to make something brilliant. There’s something in the water, which leaves the question—will you jump head-first to see what it is?

Intrigued by this sci-fi surf rock band? Feeling a little lost and in need of just a little bit of direction? Give Dr. Love Wave and the Experiments a try. And you may find just what you’re looking for, deep in the waters of this comic. It’s available via Comixology if you’re interested. Let us know if you can relate to Milt, and if you think the comic should release its own soundtrack over on our Twitter.