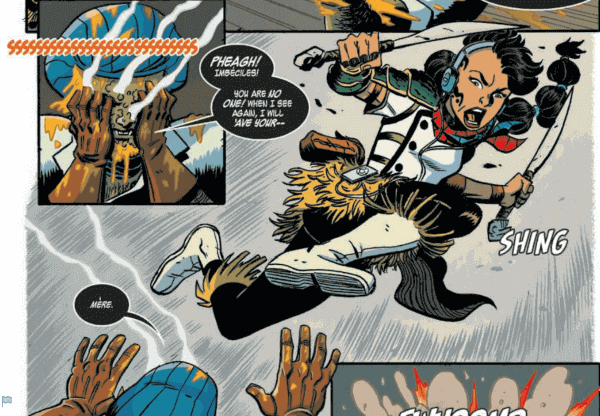 Savor is a self-contained graphic novel written by Neil Kleid. It follows a young warrior chef’s journey to becoming a heroine. The events take place on Earth’s Oven; this is an island in which natives place a strong emphasis on food and stories. When Savor returns home from her training, she discovers the legendary demons and the pirate Hob Nero have taken over her home; they threaten her loved ones! So now, it’s up to Savor and her friend Coriander to assemble the legendary knife Cuisineheart and save their home.

John Brogolia’s art immediately catches the reader’s attention. Firstly, the panels have great details with heavy shadows. A brown tone distinguishes the stories and memories, giving the comic a rustic atmosphere. The characters’ excellent outfits are an example of the imaginative designs. They combine a cook’s uniform and armor to perfectly embody Savor’s and Coriander’s role on the island as warrior chefs!

Savor offers a wonderful representation of strong female heroines. Of course, the title character is a skilled warrior chef with an unyielding sense of responsibility. She seriously knows how to handle herself in a fight. However, the violence does not dissuade her from cracking jokes. As she travels across the island and battles the demons, she begins to outgrow her role as a student. The trials she faces and Coriander’s never-ending support help her gain confidence in her abilities.

The relationship between Coriander and Savor is very wholesome; a positive example of women lifting each other up. Coriander teaches other young heroes how to be a good chef. When not in the kitchen, she teaches them martial arts. Even though she is an experienced fighter, the prospect of finally facing Hob Nero frightens Coriander. She confides in Savor and the two women reassure each other that their stories will continue on.

As a whole, the story is an example of indigenous sovereignty, and it is wonderful to see. This means the island natives are the heroes of their own stories, passing down their traditions to the younger generations. Savor learning from Coriander is a prime example of passing down the legacy. The island natives understand the traditional stories to be factual. Savor is not at all surprised when she sees the demons from the stories on her island. She is only shocked by the sudden threat.

Another example of indigenous sovereignty in the story is the food theme. Whenever they reach any new restaurant, the panels include text boxes explaining the kind of food the restaurant serves. Coriander also gives detailed descriptions of the meals she prepares. They also use their cooking skills as part of their martial arts! It’s hilarious to see Savor take down hippopotamus demons by making them cry with chopped onions. This method of fighting helps demonstrate how the chefs can improvise in the heat of battle. But it also emphasizes the cultural importance of food.

Savor is an enjoyable adventure from start to finish, perfect for readers of all ages. Its positive representation of women and indigenous sovereignty is quite impressive.

If you are interested in this deliciously themed graphic novel, it’s available for purchase at Penguin Randomhouse. Be sure to let us know what you think of Savor! Sound off in the comments or send us your thoughts on Facebook or Twitter!