Home » “Marguerite vs. the Occupation”: A Realistic Fable Of Resistance 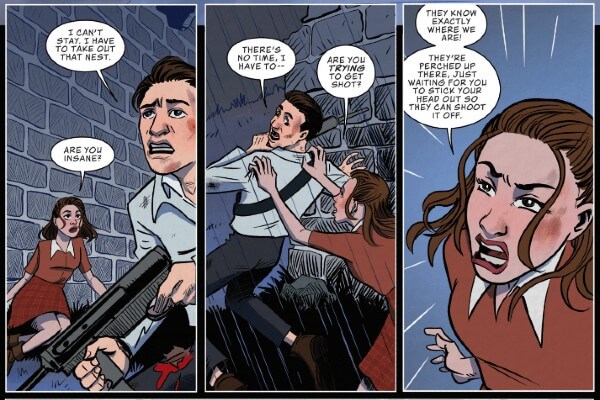 Marguerite hurtles through the forest and heads towards danger. She wants to face it, armed only with audacity. It is 1944 in Southern France. Nights swallow entire villages while they fall under the advance of Nazi Panzers, little soldiers hidden inside. Dark uniforms swarm on the main squares; reprisals against the resistance are frequent, and the partisans’ guerrilla is not enough to contain the obscure forces that are ravaging the nation.

This adrenaline-driven fable of Marguerite vs. The Occupation is a one-shot action based on real events and tells us about an act of courage. The young woman sneaks through the woods because she wants to see the resistance with her own eyes.

However, coming out of the woodland’s corridor into the clear, she meets a different fate: the bottom of page 1 pervades the readers with horror. This sudden halt in the reading pace reflects what Marguerite is feeling. She has just found out that the Nazis have taken control of her childhood home, turned it into an outpost, and worse, installed their weapons in her room. There is not much left of it. A huge hole in the wall grants the soldiers a plain view over the valley. Opposite this makeshift watch post, there is a church that towers over the village.

“Home. Home is something worth fighting for, no matter how badly somebody else has damaged it”: in conversation with Carla Vazquez here on AP2HYC, John Luzar hints at the weaving process of his narrative. In one of the few warm-toned images of the story (on page 2), Marguerite dreams of a moment of her happy childhood.

This image contrasts with the previous one. It allows a glimpse into the strong-headed protagonist’s past, as well as a look towards a brighter future. While the fable is imbued with a gloomy atmosphere, and tension permeates the story’s foundations, readers find comfort in this image; they return to it and, in it, find shelter.

After all, in such a quick succession of events, shelter is an appropriate word. Readers follow Marguerite as the story develops but suddenly find themselves at the end of it with a lump in their throat and their hearts beating fast. Convoluted action dictates the rhythm. This means that readers fall down the 20-page account as if sucked into a vacuum of violence; opposite factions confront each other. Destruction is portrayed accurately throughout the story, and so is the absurdity of war, which here is very graphic: narrower panels (page 3) emphasise the series of gunshots that wipe out the first partisans to arrive on the scene, while Marguerite saves the last one of them (Edouard). Also, the dialogues are fast and complement the tight narrative.

Because the story moves quickly, readers may find that a second or third read is necessary. Indeed, it may offer the chance to linger on the illustrations, courtesy of Kasey Quevedo, with colour by Laurel Dundee. Fittingly, there is an abundance of cold hues of blue, brown, green, and grey. The details of Marguerite’s dress, as well as those of the uniforms and various weapons, are impressive. It all feels realistic. For example, if we return to page 3, it is emblematic how the overlapping panels, the accurate drawings of the machine gun, and that of the bodies being struck by the gunshots almost produce an actual sound that looms over the entire page.

Realism is Luzar’s desired effect. The French countryside, the dreamy images of Marguerite’s childhood against the harsh reality of wartime France are all skillfully represented here. As he also mentions in our interview, “The French countryside made sense as a setting, and then I got excited about the Resistance element.”

I would recommend reading this fable multiple times. At first, the story seems to evolve too quickly, and I would add that I would have liked to know more about what came next. Could there be room for romance between Marguerite and Edouard?

In conclusion, I must highlight that further gratification for me as a reader could come from a sequel, which I hope will happen. There are hints of character evolution, though I feel perhaps not enough yet. How will Marguerite continue her adventure as the heroine of the resistance?

Marguerite’s fable is a gripping starting point for readers who like stories of resistance. If you would like to know more about it, head to the Kickstarter page. Sound off in the comments, or send us your thoughts on Facebook or Twitter!