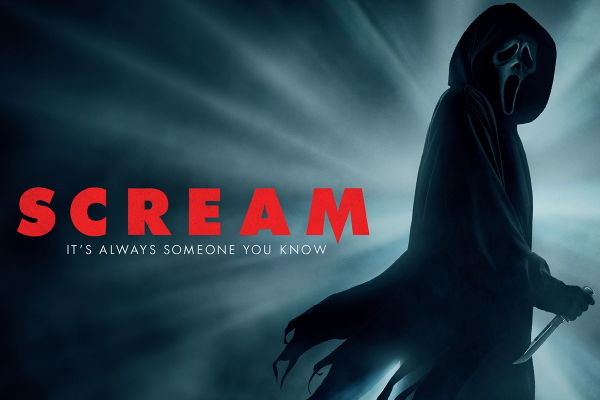 What’s Your Favourite Scary Movie? Mine is the original Scream. Like many a 90s kid, it was my gateway into the horror genre. As a huge fan of this franchise, I’ve been waiting for the latest instalment for what feels like forever. After legendary director Wes Craven passed away in 2015, it seemed like the franchise was over, at least on the big screen. Thankfully, not long after the 25th anniversary of the ground-breaking Scream (1996), we are back in Woodsboro.

Directors Matt Bettinelli-Olpin and Tyler Gillett join forces with writers James Vanderbilt and Guy Busick in this loving tribute to Craven. Original screenwriter Kevin Williamson is back, this time serving as an executive producer. From the movie’s trailers to the finished film, the team’s reverence to the original source material is clear. Whether or not they lean on it too much comes down to personal opinion, but I had a great time.

In Scream (2022), Ghostface is back and bloodier than ever. The iconic masked killer really pulls no punches this time around. The story begins when sisters Tara (Jenna Ortega) and Sam (Melissa Barrera) are dragged into the mystery alongside a new group of teens. These additions to the cast are solid overall, although I’d love to see more character development for some of them. My personal MVP is Mindy Meeks-Martin (Jasmin Savoy Brown), who provides just the right combination of snarky humour and likeability.

There are also some very familiar faces who are no strangers to Ghostface. Hello Sidney (Neve Campbell), Gale (Courteney Cox) and Dewey (David Arquette), welcome back! It’s always a joy to see the “legacy” characters return. There’s a fine tightrope to walk when it comes to sharing screen time, but each of the trio has moments to shine alongside the new cast. They have some great moments of pathos among the mayhem.

A signature element of any Scream movie; the script juggles between scares and meta humour. Here, it definitely leans more towards the latter, but still delivers some tense sequences. What’s really clever about the original movie’s opening is that it takes a mundane setting and makes you feel unsafe. In Scream (2022), there is a very modern twist. Mild spoiler ahead if you haven’t seen at least some of the trailers for the film. The use of the smart home security system to control the door locks is a genius touch. It becomes an instrument of power play between the characters and reminds me of the gag with the car doors in the original movie.

The script delivers when it comes to the series’ trademark banter and meta pop culture references. This time around, it takes a stab at toxic fandom culture, with a nod to the turbulent reception of the Star Wars sequel trilogy. It’s a smart choice and a realistic insight: it’s impossible to please all the fans. It also reflects on current genre trends, with dialogue about “elevated horror” and the popularity of A24s tense, artistic films. It’s funny because it makes me realise that I’m definitely that person who raves about Hereditary.

The meta is Inception level, with characters talking about movie-within-a-movie franchise Stab‘s sequels in a way that could apply to Scream itself. The dialogue toys with the idea of a “requel”, a kind of hybrid between a reboot and a sequel. While some may feel this detracts from the story, it’s a very 2022 take on what Scream is all about. There’s a particularly fun throwback to the original movie that plays with these layers of references which I won’t spoil.

Speaking of throwbacks, there are some cool Easter eggs for die-hard fans of the franchise. A line which references Gale’s infamous Scream 3 fringe is a personal highlight, as well as a fleeting image of a YouTube video about a fan-favourite character. There’s also the return of Nick Cave and the Bad Seeds song “Red Right Hand” in the soundtrack, absent only in Scream 4. It provides a bit of nostalgia, and tonally it adds to the mystique of Ghostface.

So, does Scream reach the heights of its namesake? Well, I don’t think any sequel will entirely, but it’s a lot of fun to see a modern twist on the formula. It’s an entertaining ride and there are some worthy contenders among the cast to carry on the franchise. If they decide to make another movie, I’ll definitely answer the call. Judging by the general reception so far, I doubt I’ll be the only one.

Do you like Scary Movies? Do you like your horror with a side of humour? Check out Scream in a cinema near you. Sound off in the comments or send us your thoughts on Facebook or Twitter!