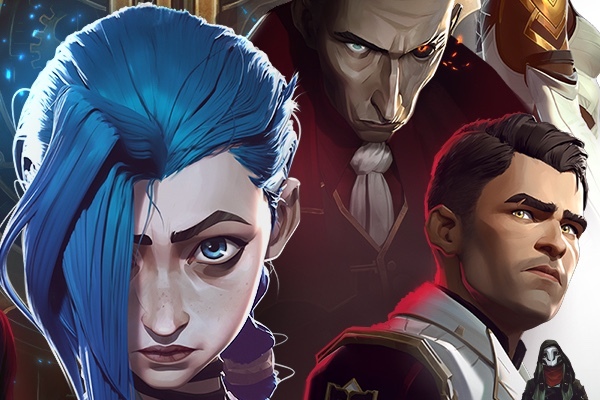 I cannot shut up about Arcane. I’ve tried really hard in the weeks since I’ve watched it, but I don’t think it’s possible. The show is, in a word, incredible. In a year that was filled with very strong contenders in the world of streaming services, it is impressive how much Arcane has held its own and stood next to other Netflix heavy-hitters like Squid Game and You. As an adaptation of lore from the game League of Legends, the show is set in the world of Runeterra. Specifically, it focuses on the conflict brewing between two twin cities; Piltover, a shining beacon of wealth and technological progress, and Zaun, its poverty-ridden undercity full of people resorting to crime and drugs just to get by.

The narrative is complex, with a lot of moving pieces in characters navigating the complicated situations caused by life in the two cities, but the focal points of the story are Vi and Powder, two undercity street urchin sisters who have been raised by a man named Vander, the de facto leader of “the Lanes” in the undercity. The two sisters struggle with their relationship to each other as well as their place in the world, and certain events quickly force them into dramatic and deadly situations which threaten to drive them apart.

Meanwhile, above in the city of Piltover, two young scientists are attempting to unlock the secrets of magic through scientific means, despite the wishes of a government and society that fears the arcane. As these narratives progress and overlap, the cities will never be the same. With brilliant, and tragic, tragic writing and characters, Arcane straps you in for a 9-episode ride you won’t want to get off of.

One of the reasons Arcane makes me so happy is because it is proof that animation can be for everyone, and is just as capable to standing toe-to-toe with live-action entertainment in its ability to tell a mature and compelling story, if not prove itself to be superior in some ways. As amazing as the storytelling and writing is, I don’t think Arcane would have worked as well as it did or left such an impact in the minds of its viewers without its jaw-dropping art and animation.

Every frame of the show looks like a work of art. Piltover, Zaun, and their denizens are brought to life through gorgeous cityscapes, brutal fights with stellar choreography, and masterful character expressions. Add on to that a killer soundtrack and remarkable vocal performances for the cast and you have a recipe for one of the greatest shows I’ve seen in a very long time.

Now, if you haven’t yet, go watch it. Seriously. And if you have, what can you look forward to in the recently-confirmed Season 2?

Spoilers below for Arcane Season 1 and League of Legends lore that may appear in Season 2:

Jinx, everyone’s favorite blue-haired loose-cannon and the definitive show-stealer of Season 1, literally ended the season with a bang by shooting a hextech-powered missile right into the chambers of Piltover’s council – surely shattering any possibility of peace between the two cities and likely causing at least some casualties among the ruling body. We’ll now surely see more of a fully realized Jinx.

This is likely going to bring her to blows once again with Vi and Caitliyn, the latter of who’s mother was inside the council chambers. The fate of Lady Kiramman will have a great impact on Caitlyn, likely galvanizing her to hunt down Jinx. Councilwoman Mel Medarda was also standing right in the center of the impact, potentially spelling doom for her. Not only would her injury or death severely impact her love interest Jayce, but could potentially have a greater ripple-effect should her power-hungry mother seek to get involved.

One of the many things Season 1 of Arcane did so well was establish compelling characters that are interesting on their own and in how they interact with one another. I am personally incredibly excited to see more of Ekko and Heimerdinger’s interactions. They are opposites in many ways, with one being an old academic of high society and the other a youthful freedom fighter from the slums,  and yet both share a love of science and a desire to help better their world.

Additionally, we hopefully will see development in the relationship between Caitlyn and Vi. Beginning as unlikely allies, they developed a strong bond over their adventures together, and though Vi told Caitlyn that they were like “oil and water”, the show seems to be setting up a relationship that is more than just friends. More than anything though, Arcane is about the relationship between Vi and Jinx. It is a beautiful and tragic story about two sisters, and what exactly will become of this relationship after Silco’s death and the destruction of the council remains to be seen. Is there any hope of redemption or reconciliation for the sisters? Or are they fated to become and remain enemies?

While Arcane already had a lot going on in Season 1, Piltover and Zaun are just one small corner of the massive world of Runeterra. With the arrival of Mel’s mother in the final episodes, the show teased the threat of Noxus, as well as implicitly implying the presence of Noxian champions from the video game. Even a number of champions from the over and undercity have yet to make an appearance so far. We know that the vicious wolfman Warwick is likely to show up based on a shot of a clawed figure in Singed’s laboratory – heavily speculated by some to be the body of Vander being turned into a monster, who was suspiciously referred to as “the hound of the underground” several times during the show.

Other likely contenders seem to be Blitzcrank, a benevolent mechanical golem invented by Viktor, and Ziggs, an explosion-loving Yordle who is known to be a friend and ally of Jinx. Beyond that, not every character has reached the versions of themselves we know in the game. We have yet to see Ekko discover how to manipulate time, and Viktor has yet to fully reach his mechanical “glorious evolution” with the hexcore that he is known for from his playable appearance in game. There is so much more for Arcane to build on, and I’m sure it will deliver and blow us all away once again.

Have you seen Arcane yet? What do you hope to see in Season 2? Sound off in the comments or send us your thoughts on Facebook or Twitter!