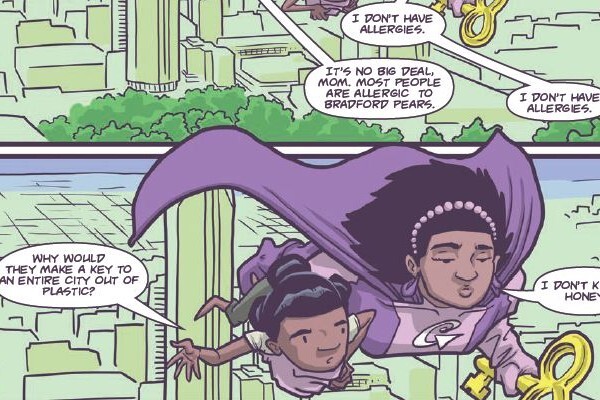 Glamorella’s Daughter, by Jerry Bennett and Charles J. Martin, centers around Comet. She is an inquisitive girl who is the daughter of superhero Glamorella. Most of the story focuses around their relationship. As strong as Glamorella is, she cannot relate well to her bookish daughter. Neither of them particularly fit into society, though for different reasons. Throughout the issues, it’s clear that there’s something nefarious about the portal Glamorella came through thirteen years ago. The plot is interesting; it takes its time exploring both the action and the slice-of-life side of things. This creates a good balance in the narrative. Side characters are also all very compelling and serve to further the plot.

The art style blends clean linework with a pastel color palette. It also has a sketchy quality to it that provides a nice sense of texture. Unfortunately, some of the characters have large heads which is the only issue with this style. This is probably intentional, though it looks incongruous at times. Beyond this, one of the things that makes Comet stand out is that she is neurodivergent. This figures as an important part of the plot. Luckily, her neurodivergence is not used to inhibit Comet or her characterization. She clearly struggles in the world. But this struggle is not just because of her neurodivergence, nor does it prevent her from making genuine connections with the people around her. For example, her best friend Isaac; his gregarious nature contrasts well with her quiet one, and the two of them work well as a duo.

If there is an area where Glamorella’s Daughter struggles, it probably comes from the balance of comedy and drama. While this works fairly well for the most part, sometimes the jokes do not land as well as the comic intends them to. Luckily this issue does not crop up too often. The characters also sometimes act in ways that come off as artificial. This perhaps has more to do with the genre than this specific comic. The superhero genre is not known for its faithfulness to realism, nor is that always effective for storytelling. Clearly the comic tries to push a narrative that is quite serious at the heart of it.

One of the core issues comes from Glamorella’s struggle to balance her job with her daughter. Comet tries to balance society’s expectations of her legacy, versus who she actually wants to be. Both of these characters must hide parts of themselves from the world in order to seem acceptable. Something must have happened in Glamorella’s past that catalyzed her desire to fit into this world that she does not actually come from. Though most of her struggles are external, her challenges relating to her daughter are the most poignant. Part of this challenge comes from Comet’s lack of interest in fitting into society’s role for her. Because of this, despite her lack of super strength, she is stronger than her mother.

What worlds would you want to see? Interested in reading up on Glamorella’s Daughter? Be sure to check it out on Literati Press. Let us know on Facebook or Twitter what you think and everything else in between!