Home » Doctor Strange in the Multiverse of Madness Review: A Flawed Film But How Can You Not Love Sam Raimi 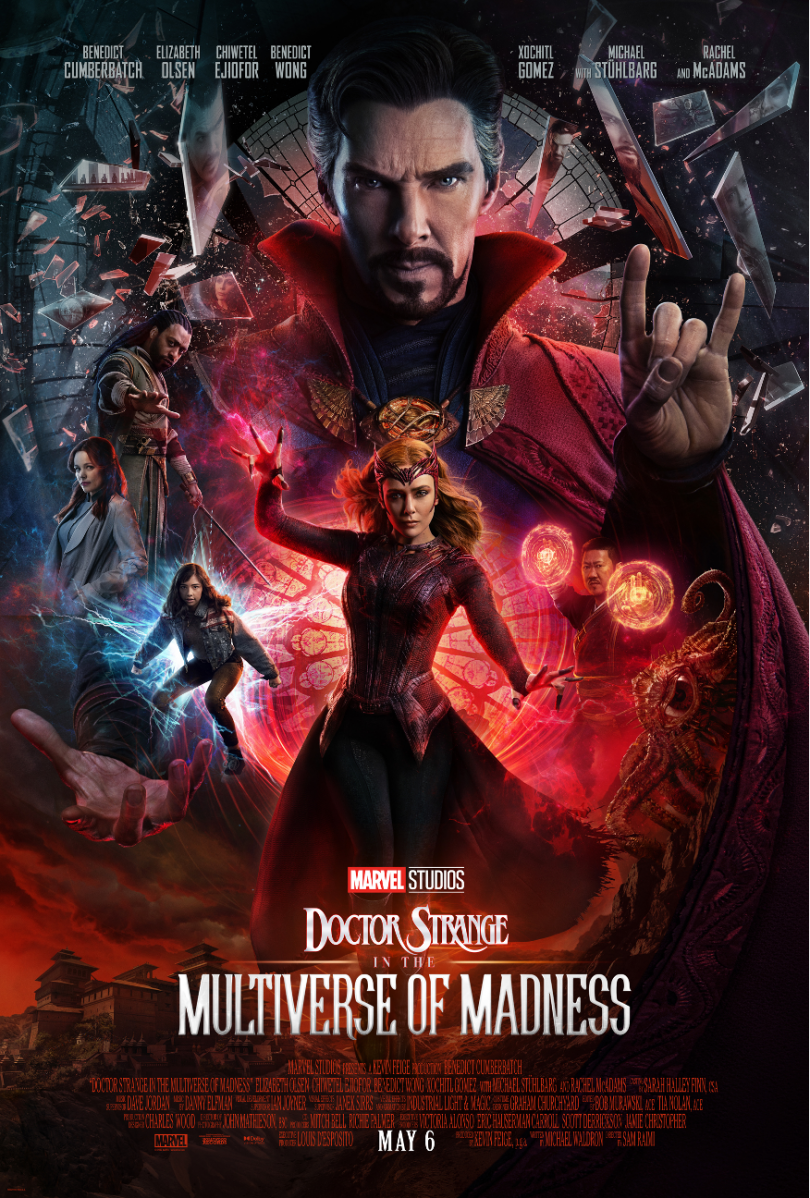 I might as well follow the trend that a bunch of websites are doing right now. Giving readers homework for watching Doctor Strange in the Multiverse of Madness. Except I’ll do it for people that have already watched this wacky movie. If you enjoyed the various little horror elements throughout this film then you must love Sam Raimi in the genre that got him on the map in the first place. So do yourself a favor and watch the original Evil Dead trilogy. Because Doctor Strange in the Multiverse of Madness is the first ever horror-lite film in the MCU. Making this sequel an overall unique, pretty fun movie-going experience. Unfortunately, however, the movie does also rekindle the overarching issues with the state of the MCU. Which cannot be pinned on Raimi, but the times.

I mentioned it briefly in my Shang-Chi and the Legend of the Ten Rings review but the MCU has been at it’s best when it doesn’t feel like it’s following an all too familiar format. Comedic scenes throughout, giant CGI fights, predictable character arcs, villains with similar abilities to heroes, etc. In this case, there are clear liberties given to Sam Raimi in Doctor Strange in the Multiverse of Madness. Which is a good thing. Afterall, none of us wanted another Spider-Man 3 situation. Or did we? Ok, from a production standpoint, we didn’t want to see Sam Raimi have to go through that hell again.

Anyways, the Multiverse of Madness puts our Master of Mystic Arts in contact with a mysterious traveler running from seemingly demonic forces. It soon becomes clear that this girl, known as America Chavez, can travel between dimensions. Making her powers coveted by those both inside and outside this reality. Allowing a very compelling villain to emerge that we are certainly familiar with. In the midst of this battle, Strange encounters the consequences of the actions from the multiversal versions of himself. Which results in his own existential crisis throughout the film.

While preparation for this movie is ideal (watch WandaVision), I would say that Raimi and writer Michael Waldron do a good job making this complex material as palatable as possible. In addition, a round of applause needs to be given to Elizabeth Olsen in this film. Her character Wanda Maximoff/The Scarlet Witch has also been one of the emotional heartbeats of this universe. But especially at a time when so many character arcs came to an end in Phase 3, her storyline has become one best elements of the MCU. Even without the audience’s knowledge of WandaVision, Olsen does a terrific job conveying everything the character has been through. As well as making us understand what she believes she needs to do throughout the film’s runtime.

Moving on, all of the what I’d like to call “Raimisms” of the film are awesome. The jump scares, tense quiet sequences, chaotic camera angles, leaps through the multiverse that are very Evil Dead 2esque, and, of course, the Bruce Campbell cameo were all predictably awesome. I love Sam Raimi. In addition, the acting throughout the film is very well done and none of the characters stick out like a sore thumb. Which is unsurprising with this exceptional cast. And, I almost forgot! Great to see Danny Elfman again, and he brings us another great score. Especially for the scenes involving The Scarlet Witch.

Nevertheless, an issue with this movie is the lack of narrative tension throughout. This issue is present in many of the most recent MCU films and even some of the shows of Phase 4. Also, the CGI! I know this is the type of movie that was going to require a lot of it. Still, though, my eyes hurt from all the giant CGI monster fights throughout. Anyways, more importantly, going back to my previous criticism, the MCU has struggled to recapture the narrative emotion they had in films like Black Panther and the last two Avengers films. The stakes were higher than ever especially in those Avengers films, and while technically they can be considered just as high in this film, the tension and the fear the audience is supposed to have for characters they care about is lacking.

That’s one of the main issues of the MCU right now. After Phase 3 it’s been really hard for this franchise to truly recapture that emotion, that lightning in a bottle it once had. Especially with the recent MCU films, raising the stakes has come before character development as more and more heroes are added. The possible calamity must be graver and the amount of CGI used must be doubled. Resulting in characters who, outside of Wanda in this film, we don’t really care all that much. And who also have a lot of plot armor. It might just be MCU fatigue on my part, but despite the deaths in this movie and the tense scenes throughout due to Raimi’s brilliance, it was hard to feel gripped by the film’s overall narrative.

The lack of real stakes and tension unfortunately makes the movie drag a bit. Especially for the over two hours it’s on screen. We’re not really given a reason to care for this traveller America Chavez. Aside from the fact that she’s a child and we briefly see that her powers separated her from her family. In addition, the underlying love story between Doctor Strange and Christine Palmer falls a bit flat. Despite Benedict Cumberbatch and Rachel McAdams’ best efforts. Honestly that’s more the fault of the previous Doctor Strange movie than Doctor Strange in the Multiverse of Madness.

Still, the positives outweigh the negatives in this film. This is a movie worth watching, especially if you are a fan of Sam Raimi. Anyways, overall, Doctor Strange in the Multiverse of Madness has many flaws but it’s captivating enough and directed by one of the cornerstones of blockbuster superhero movies. Combine that with Elizabeth Olsen’s performance, and you get another solid addition to the MCU. And Danny Elfman’s score! Also, there are some entertaining cameos to keep an eye on throughout the film as well as an interesting and a hilarious (for me at least!) post credits scene. So, like always, you’ll have to wait a little bit longer after the film ends!

What did you think about Doctor Strange in the Multiverse of Madness? And the current state of the MCU?
Sound off in the comments or send us your thoughts on Facebook or Twitter!