Home » “Killtopia” #4 Is Electrifying And Terrifying 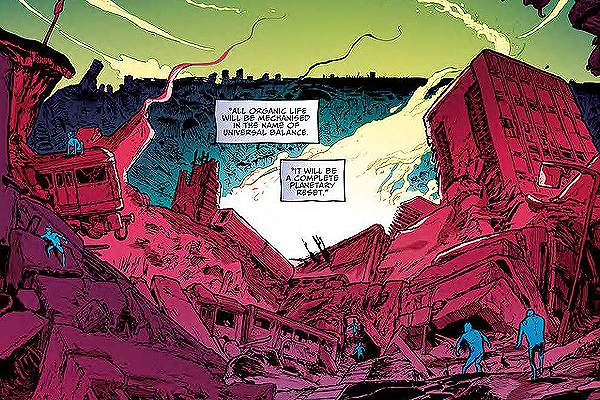 David Cook is back once again with another addition to his ever-so-successful graphic novel series Killtopia. Working alongside Clark Bint in the art department, with colors and letters by NL Ashworth and Micah Myers, the series continues to impress with a kinetic storyline aided by the impressive visuals. The series as a whole has a very Black Widow and Deadpool at Sister Margaret’s School for Wayward Children meets Ghost in a Shell vibe to it. It tackles themes such as body horror, human trafficking, capitalism and child labor; all wrapped up in a very fucked up version of the found family trope. Welcome to Killtopia #4!

#4 delivers some killer lines that make readers rethink their own perspective of the comic; lines such as, “it promises so much and takes everything in return”. These philosophical moments alongside the themes mentioned above are what make the series as a whole such an alluring read. It’s particularly important in this one as it jumps through different time periods of Gwen’s life. Using outsider narration and retrospective storytelling, #4 goes through Gwen’s struggle in training, falling in love, running away and coming back home. It may seem like a simple coming-of-age narrative, but it’s far from it. Complex discussions are had over mind over body, and whether losing the self is worth continuing to live on.

The visuals also help tell the story. Bright colors electrify the page; there’s a disconnect in the opening words that speak of a great warrior’s sacrifice against the oversaturated wash of the colors. This lets the reader know that not everything is what it seems. You would expect dark colors or dull hues during a speech for a fallen warrior. But alas, it’s all yellows and fierce reds. Of course, it’s a misdirect – but an obvious one at that. They’re actually auctioning Gwen’s parts. This initial juxtaposition sets a precedent for the constant surprises within the rest of the comic.

Other interesting visual things of note are how bright colors act as distractions and methods of desensitization from the violence and reality of the world. They pair well with well-crafted slogans such as “slum wars” and modern-day social media speak to emphasize the commercialization of people’s sufferings, further adding to the commentary on capitalism. Mobs are shaded in the same color to indicate their insignificance. The high contrast color palette add edge to the pages, heightening stakes and also enjoyment for the reader. This high contrast also exaggerate the already graphic and explicit gore. Tone and time shifts from present to past are exhibited through the transition of colors; from high saturation to low, and more reds and neutrals bleeding over bright colors.

There’s a lot to like about #4, and it’s cool to see Gwen’s backstory explored. There’s a little bit of an indication as to what’s next for this ragtag group, and for the world of Killtopia as a whole in the last few pages of this issue. It’s something I’m looking forward to reading more about. That said, this isn’t a comic for the faint of heart. With its colorful allure, you might just think it’s all fun and games. It’s not. And this serious edge to Killtopia is what ties everything together. I can’t wait to see how everything else unfolds.

Been following Killtopia since day one? Are you excited for Killtopia #4? If you’re new to the series and would love to read up on the previous and issues, be sure to check out its official Twitter page for all the purchase info and new updates on this and any future issues of Killtopia! Let us also know your thoughts over on Twitter or Instagram!