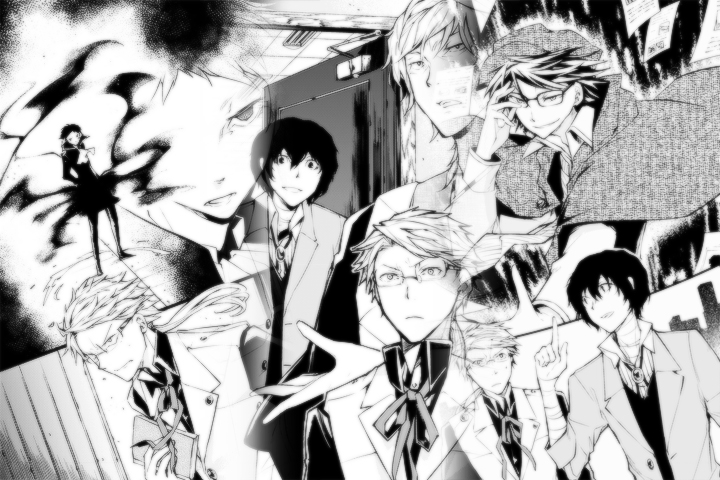 Osamu Dazai’s Entrance Exam is the first light novel in the manga series Bungo Stray Dogs. Written by Kafka Asagiri and illustrated by Sango Harukawa; it serves as something of a prequel, based around Osamu Dazai’s introduction to the Armed Detective Agency. Doppo Kunikida mainly narrates it. He is a staunch idealist and Dazai’s partner. While the novel claims to focus on Dazai, Kunikida serves as the emotional and philosophical core. The plot of this book veers wildly through crimes, espionage, and the ever-present tension between Kunikida and Dazai. Despite Dazai’s appearance as a somewhat idiotic bum, Kunikida senses there is more to him than meets the eye. This is a cause of concern for him; one of the threads of this story comes from Kunikida’s uncertainty about Dazai’s loyalties.

While Dazai’s past remains blank and mysterious, Kunikida’s history gets fleshed out in vivid detail. The reader learns about his involvement in a case surrounding someone called the Azure King – a bomber who blew himself up along with several agents. One of his victims was the father of Rokuzo Taguchi, a young hacker who works as an informant for Kunikida. Kunikida uses this as an excuse to look out for the boy; especially since he feels responsible for the death of his father. A myriad of other characters appear throughout this novel, including Miss Nobuko Sasaki. There is also Ranpo Edogawa, another member of the Armed Detective Agency, and Ryunosuke Akutagawa. The latter is a dangerous skill user who works for the Port Mafia.

Many of the major characters have supernatural skills, such as Kunikida and Dazai. These skills are important to the story but serve more of a background purpose. The subterfuge and crime-solving plays a far more significant role. The plot is remarkably complex, but stays easy to understand throughout. Although the action never dies down, the humor consistently delivers – the characters themselves are lively and varied. The antics of Dazai and his infuriated partner both entertain and keep the reader interested; it never feels stale, and no crime gets solved the same way twice. Kunikida and Dazai serve as foils to each other; Asagiri sets up their methods of problem-solving and crime-fighting as examples of their opposing natures. They are a balance of each other, and the story.

The entire light novel sees Kunikida wrestling between his ideals and his humanity throughout. This leads to interesting questions about the nature of humanity and how we navigate the world; how we choose to respond to our lot in life and the very unideal reality that surrounds us every day. He does not come to any concrete conclusions, but then again, nobody ever does; there does not exist any one right answer or way of doing things.

Osamu Dazai’s Entrance Exam does suffer from having too lofty ambitions at times. While following the plot is not difficult, it can feel like there’s so much going on. Occasionally, it seems as though the author scrambles to introduce as much of the world as he can; he ends up overstuffing it. This leads to some revelations that might make sense to someone who has read the manga or watched the anime, but do not have any direct bearing on the plot of the novel itself. This issue is minor and overall, and the light novel is very effective and enjoyable on its own.

We’re reviewing every single light novel from the Bungo Stray Dogs series every month in anticipation for the upcoming fourth season. If you like anime in your diet, have an affinity for literary figures, and in love with stories about gangster paradises, you may want to check back in every now and then for the rest of the series. However, if you’re already familiar with Bungo Stray Dogs and would like to read the light novels for yourself, go ahead and check them out over on Yen Press. Let us know what you think of the anime and the light novels on our Facebook or Twitter!