Home » “Riders Of Berk: Dragon Down” Carries The Spirit Of How To Train Your Dragon In More Ways Than One 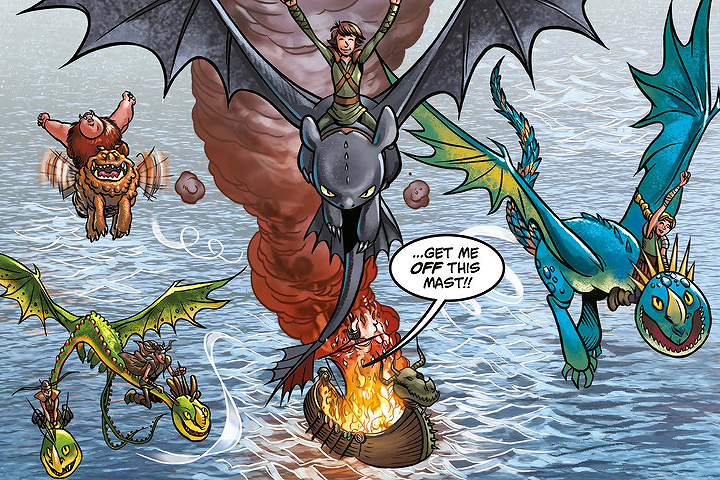 Every now and then, A Place to Hang Your Cape likes to try a lot of different things when it comes to the comic space. More than just your typical western-styled comics or Japanese manga; we also like to look at other mediums that fall under the umbrella of graphic novels. This is why we started our monthly review of the Bungo Stray Dogs light novels. Sometimes, we even like to look back on some moderately old classic stories that still continue to make their mark, even until today. Here’s where How to Train Your Dragon comes in. Because the entire franchise isn’t just about the films. No, see—there’s so much more content this story has to offer. There’s a television series with multiple seasons! And of course—comics! Today, we’re looking at Riders of Berk: Dragon Down; the first in line from the Dreamworks Dragons comic collection.

Written by Simon Furman, with art by Iwan Nazif and Bambos Georgiou, and letters by David Manley-Leach; Dragon Down follows the How to Train Your Dragon cast sometime after the first film. Separated into four chapters; this issue of Riders of Berk focuses on Hookfang – Snotlout Jorgenson’s dragon – as he sheds fire across the little village of Berk. Gobber separates him from the rest of the village, spurring several different things to happen at once. The structure very much follows the episodic style of the television series. One overarching problem dominating leads to a series of different events; dragons and trainers learning new tricks and lessons on the side; fights against the villains where the riders use what they’ve learned throughout their training to overcome; the last moral lesson learned is of reconciliation amongst the characters or between them and their dragons.

Dragon Down uses the same narrative tropes as the films and the television series; from Hiccup narrating, to starting off with an introduction to the Viking lifestyle and the many wonders of living in Berk. This keeps the story in theme with the films. It also helps readers stay close and familiar to the canon of How to Train Your Dragon. But these are not the only traces of the overarching franchise in the comic series. The same characters mean the same gags are had. There’s the friction in Snotlout and Hookfang’s relationship; the twins butting their heads, figuratively and literally; Gobber as Stoick and Hiccup’s voice of reason; and of course, Mildew coming in to complain. The dialogue is also very reminiscent of the film and television series, capturing well the essence of the characters. It’s naturally-flowing with bountiful irony, jabs and sarcastic remarks.

I also like the continuation of everyone’s story arcs. It’s a nod to the continuous work-in-progress state these characters are in. I specifically adore the little hints of Stoick being an overprotective father; for example, him waiting out in the storm for Hiccup and his friends. This extends the ongoing rift between father and son. While the first film may have kickstarted Stoick’s redemption arc, it’s still not quite rainbows and roses between the two – seen time and time again through multiple instances in the films and the series. Furthermore, I also like all the allusions to Hiccup’s guilt, his leadership complex, his very bad self-preservation, and his ingenuity.

Taking into account that this comic is written after the first two seasons of the television series and just slightly before the release of How to Train Your Dragon 2; there are a lot of references to the upcoming film. These references help bridge the gap of the first introduction to Hiccup and Toothless, to the many new things they do in How to Train Your Dragon 2. One criticism I do have writing-wise is that despite this story focusing on Hookfang, Snotlout doesn’t get much screentime. We all love Hiccup and it’s nice to see more of him. But it would’ve been nicer to see more of Snotlout; this issue especially because his dragon is the main catalyst for most of the events in the story.

Nazif draws some fantastic art that stays true to the original series. But he also adds his own flair exclusive only to the Riders of Berk comic series. In an animated show, a lot of corners are cut to meet budget demands; colors are less saturated and there are fewer details due to reused character designs. Fortunately, comics don’t have these same types of constraints. Dragon Down uses little details that differentiate each individual – even the mob characters such as Alvin’s henchmen. They all have different hair colors, wear different clothes and different braid styles. While there are instances where Alvin may look like a copy of Stoick, things like his helmet, the styling of his hair – more unruly than that of Berk’s chief – and his neutral palette alleviate any of their similarities.

Nestor Pereyra and Digikore do a really good job with the colors. They are bright and vibrant. Although it may seem like they can somewhat mislead in tone – with dark shades used during fun times between friends – it’s actually a visual form of foreshadowing; of bad times coming, and a storm brewing. The way the colors really set the weather and atmosphere is something amazing to behold. They also add texture and layers to the dragons’ designs. While they’re not as technicolored as the series and films, they add enough dimension; from the gradient fades in Stormfly’s blue and yellow coat, to the blend of yellow and red on Hookfang. The visuals are so fantastic, that I only really have one complaint. Some of the panel arrangements can be confusing. But all you need is some time to get used to it!

Dragon Down is a sweet introduction to the comic world of the How to Train Your Dragon franchise. I know Dreamworks is trying to revive it with their new series Dragons: The Nine Realms. But really, they should just invest in more of these than modernizing the old tale. There’s very little love and recognition for the comic series. But I hope this review sparks your interest. Or even still; reignites your love for Hiccup Horrendous Haddock III and Toothless!

We’re reviewing every single comic from the Dreamworks Dragons series every month in anticipation for How to Train Your Dragon 2’s ten-year-anniversary. If you love animation and dragons, miss this 2010 classic, and want more of the dragon riders; you may want to check back in every now and then for the rest of the series! You can pick-up a copy of Dragon Down on Titan Comics or Waterstones. It’s collected alongside the rest of the issues in the Riders of Berk title. Let us know what you think of Dreamworks Dragons on our Instagram or Twitter!