Home » Please Look At Your Screen: “Obsolete” Takes Us Into The Future Of Education 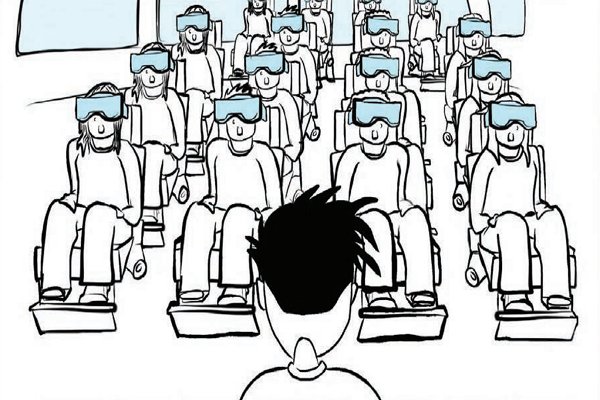 Technology is such an integral part of our modern everyday lives. Especially with the pandemic, we are constantly glued to our screens. I was still in school during the start of COVID, as was my little sister. So, we found ourselves doing Zoom classes for most of the week. Now, schools and institutions are trying to return to “normal”. But what if that reliance on technology only grows stronger from here? That is the world Obsolete: A Teacher’s Tale explores; where an old-school professor tries to argue against technology’s role in children’s education.

Obsolete is one of the longest comics I’ve covered in my time here! It’s a whopping two-hundred-thirty-three pages long! Thankfully, it’s separated into chapters. This breaks the story into multiple spots to bookmark and come back to. We follow Professor T, a History teacher questioning how technology is impacting the world’s ability to learn. He tries to teach his senior class about propaganda, subtly hinting that everything they’re being fed through their devices is brainwashing them into compliance. Dash-A, one of Professor T’s kids, takes the lesson too far. This results in Professor T’s demotion to a less prominent school.

At his new school, Professor T questions the institutions even more. He witnesses how the machinery used to teach kids History hurts them in more ways than one. A kid becomes violently ill due to the strong data streams. When Professor T tries to remove Dash-A from her seat, the disconnection nearly kills her. Everything spirals down from that point onwards. Professor T acts on his suspicions; he discovers that his teachings have created the city’s resistance called the “Sabs”. Ultimately, Professor T’s defiance lands him in a reset. While he passes his knowledge onto Dash-A, his entire memory gets wiped.

Obsolete makes its stance on teachers very clear. We’re rooting for Professor T, who believes all students should interpret information in their own way. Their propagandistic school curriculum leaves no room for individual thought. Therefore, instead of relying on technology to do all the work, teachers give that necessary room for individual thought. Obsolete takes this point to the most extreme level. Relying on technology to teach kids is a very bad idea. Even though there’s room for human error and bias with human teachers, it’s better than brainwashing.

As far as the art style goes, it’s not the most eye-catching. There’s very limited use of color as most of the comic is in black and white. A lot of the poses, expressions, and characters are recycled for later usage. I always advocate for recycling panels when neccessary and this is no different. But I know repetition is not everyone’s cup of tea. The only part of Obsolete that really gets on my nerves after a while is the narration. Professor T has a lot of internal thoughts, and nearly all of them are philosophical in nature. But the narration pops up in nearly every panel, and it usually doesn’t connect to what’s happening in the story. The narration text boxes are also very small. Reading each and every one takes me out of the story several times.

Overall, I think Obsolete‘s selling point is its message. It’s clearly advocating for teachers’ roles in the classroom, as well as students’ freedom to process information. While this graphic novel doesn’t have the most appealing style in the world, its story really drives home its concerns about the future of education. Long story short, we shouldn’t leave education in the hands of technology; give teachers more credit for the work they do; and respect that they’re doing their best to teach children about the world. Let children develop and form their own opinions on the content they’re given, and guide them in the right direction. That’s a method that will never become obsolete.

What did you think of Obsolete? Do you think technology will completely rewrite the education system in the future? Obsolete: A Teacher’s Tale is available on Amazon in Kindle and paperback format. It’s also available on Barnes and Noble for paperback. Be sure to share your thoughts with us on our Facebook or Twitter!