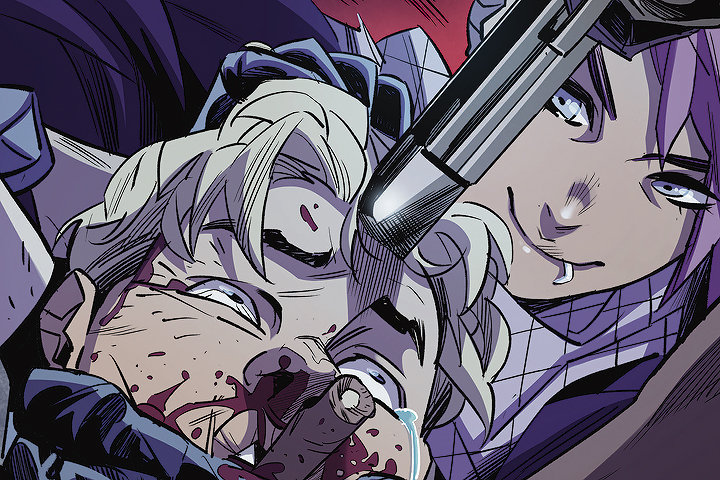 When someone drops off of the fame radar and becomes desperate for money; instead of falling into the traps of prostitution and selling sex, Amputation Capital encourages them to sell their amputated body parts. The title is exactly what it says on the tin; it’s the commodification of skin. This adds a whole new meaning to the concept of skeletons in the closet. Even more than that, it’s a revelation for how far people will go for fame and notoriety. Amputation Capital is very explicit; in the torture, the blood, the amputation, the sex, and even at times the bodily fluids. This is an uncomfortable piece – not one for the squeamish, faint of heart, or sensitive to gore. The story’s interesting enough it almost makes it worth it. Almost being the operative word. Think Black Hole by Charles Burns and From Hell by Alan Moore.

#1 begins with ominous narration. It talks about the downfalls of fame and the social culture of cancellation. The comic has a lot to say about cancel culture; of how even when people do bad things, those who stay on top stay where they are because they have the money and power to do so. This first installment ends with torture and violence, a pattern you’ll soon come to realize. As for #2, it begins with the trope of oversharing to a person taking your order. It’s a clever – albeit overused – form of embedding exposition through humor. The main character of the first two issues is definitely Alfie.

As Alfie enters the scene, he suddenly commands the room with absolute charisma. He has a sort of charm that draws readers and other characters in. It’s similar to the likes of Jack Fortune in Afterlife Inc. and Francis Scott Fitzgerald from Bungou Stray Dogs. Alfie is proactive; he takes matters into his own hands and does whatever he wants. Of course, all that is to his excessive rise or rapid fall – and nothing in between. Which is just as well as #1 ends with the torture of Alfie at the hands of those he has bought from. There are heavy internal dialogues that really give way for brilliant characterization.

“Why would I give him tickets? Because it’s always good to have people owe you favors. And I don’t have any friends to go with,” so Alfie says. Just this one statement opens up a whole lot of nuances to his character. It reveals his intentions and the undertone of loneliness coded into him. Even though he’s slimy, repulsive with bad business practices, it’s easy to root for him. As uncomfortable as the subject matter and visuals are, you read on to know what becomes of Alfie. This is all down to Raymond Tyler and Neil Gibson’s writing. They have a wonderful way of projecting the intended tone through their narration. This is specifically thanks to how the comic sections the words across the page. Jed McPherson’s lettering also helps in this regard; he adds in the necessary soundbites for that extra layer of emotion.

André Risso’s art makes it hard to look away from the page. He captures every explicit detail and euphemizes it so that it’s not too overbearing for the reader. His art works so well with Liezl Buenaventura’s clever way with colors. For example, warm tones decorate the sales pitch that Alfie does with Morgan. The panels are full of texture and inviting shadows. Then it suddenly cuts to the neutral and dreary backgrounds of the sales training. This effect is a physical exhibition of how easy it is to be taken by flowery words and scenes. The coziness of the sales pitch against the hard cold pitch trainings is a harsh reminder that Alfie is all for show and there are no feelings attached to his persuasion. He’s a salesman through and through.

Flashbacks use old newspaper-like sepia tones as if they’ve been thrown and tattered away. This is very much a nod to Alfie and his past. He who was once just a downtrodden young man who wanted to help other people before falling into the skin business upon the realization of how money absolutely runs the world. His efforts to make his parents happy lead him to the life of a deceitful salesman. As the graphic novel says; “It may take a while. It may take getting used to. But selling gets to be something to enjoy”.

Amputation Capital has a habit of likening the trade with something sexual and romantic. The sales pitches have heavy undertones of flirtation, while the amputation alludes to bedroom manners and sex. The dialogue also has a lot of fun using double meanings in phrases like “an itch you just couldn’t scratch”. It’s very telling of the story and world Tyler and Gibson are trying to create.

Have the stomach for Amputation Capital? If you’re interested in seeing this influencer dystopia, the first three issues are available at Global Comix! If this isn’t for you, that’s alright, have a look at our other comic reviews and hit us up with any thoughts on our Twitter and Instagram!