Home » “The Legend Of La Mariposa: Vulcan’s Challenge” Welcomes You To The Dangerous World Of Luchador Wrestling 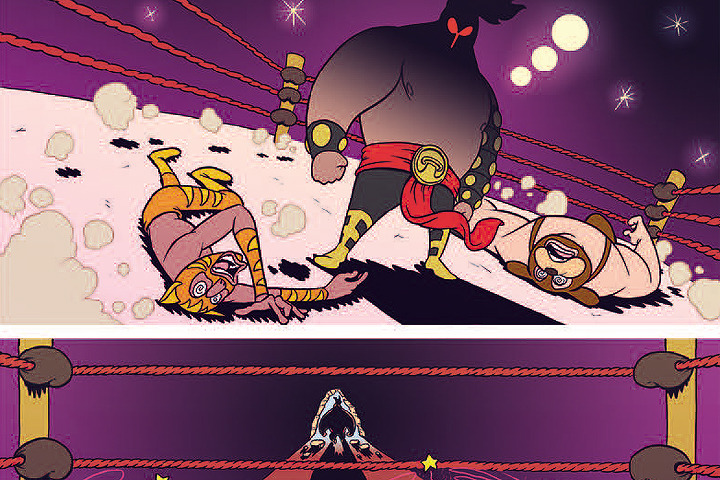 As a wrestling fan – and to this day, still watching WWE; this comic fascinates me. I’ve never really been into luchador wrestling myself. But one of my all-time wrestling idols has always been Rey Mysterio; and it’s nice to see a glimpse into the world that once trained him. There’s also an abundance of techniques and moves used by other types of wrestlers here; the shining wizard which is my favorite move by AJ Lee, and Asuka’s green mist. But most importantly, it’s just great to see a female luchador since there’s rarely any in mainstream wrestling. But The Legend of la Mariposa: Vulcan’s Challenge by James Lawrence has something even deeper than just that. It tells you that you are worth more than just your pride; it’s really the people around you who will do anything for you that are the real treasures in your life.

The comic begins with lots of action and very little words – but it’s when the words come in that make the biggest impact. Mariposa is a very likeable character; I absolutely adore her. She may be short, but she stands tall and strong against the odds that befall her. Her dynamic with King Gila is very friendly and competitive. There’s a strong level of respect and sportsmanship between them. In general, I like the dynamics amongst the chosen challengers. It’s the silent nods of agreement; the over-dramatics of the armadillos as they plunge to their demise; of Rebel helping out Mariposa and then turning her coat on her; it’s all of them working together, creating different tactics to win and take down Vulcan. Then of course, there’s Dada Abstracto; he gives me strong Hisoka Morrow from Hunter x Hunter vibes every time he speaks.

The Legend of la Mariposa combines several different genres for me. Luchadors dressed in colorful gear and aesthetics remind me of superheroes and villains. It also has a very sports anime feel to it; every action is exaggerated and lands a killing blow to the opponent. The comic raises some excellent questions; of making decisions that reflect the self, or more logical choices that deviate from your own codes for the greater good. Last but not the least, it has an absolutely fantastic ending; one that sees both human greed and generosity, without giving a definitive answer to which is right and which is wrong. One criticism I have for the writing is the that there are some grammatical errors in the text. I’m unsure if these are deliberate or simple typos anyone can make. This is especially jarring for Vulcan who usually speaks in such an eloquent manner.

Right off the bat, you are immersed in such a beautiful world. It’s all vibrant colors tinted in a warm-toned filter; these really exude the atmosphere of the sets and venues. The Legend of la Mariposa is not just colorful in terms of the artistic choices; its world is also very diverse. The action is smoothly-drawn, with solid colors and SFX lettering decorating the background to capture fluid motion and explosions. The combination shows off the strength of Vulcan. I especially love the dialogue separation that beats in time with the visuals. You can almost feel the sweat dripping off of the page thanks to the combination of art and expert coloring.

The amazing use of textures and shading creates a more three-dimensional world. I especially love how this combines with the colors to accent how scary and brutal certain matches and wrestlers can be. For example, the shadows and the over-dominating red that surrounds Vulcan really heightens the intimidation he exudes. He comes across as a red flag and a glaring warning sign for danger. The comic’s visuals are just honestly the best part of The Legend of la Mariposa. But that doesn’t discount the excellent writing and character work either! This graphic novel just has everything going for it.

Love wrestling? Interested in the world of masks and luchadors? If you want to give The Legend of la Mariposa: Vulcan’s Challenge a shot, be sure to check out its Kickstarter as it’s live now! Show your support to continue the story of Mariposa. If you have any thoughts, be sure to hit us up on our Twitter and Instagram!