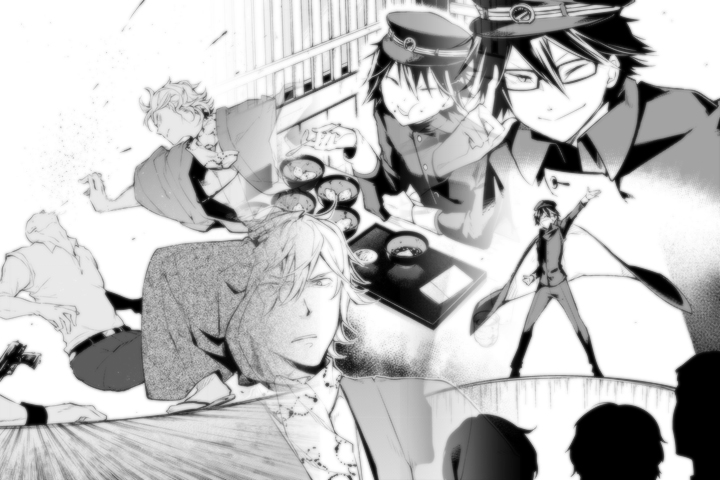 Bungo Stray Dogs: The Untold Origins of the Detective Agency, written by Kafka Asagiri and drawn by Sango Harukawa, consists of two parts. The first quarter follows members of the ADA as they squabble over what entrance exam to give to Atsushi. This introduction functions more or less as a humorous sidenote, featuring the cast at their quirkiest. It also involves some clever mystery solving. However, the light novel really kicks into gear once the titular second part takes over. This section follows Yukichi Fukuzawa; a bodyguard and eventual founder of the Armed Detective Agency. It takes place twelve years prior to the events of the manga. Most of the story consists of him learning to tolerate the precocious and vexing Ranpo Edogawa as they attempt to stop a murder.

The light novel has precious few images, but the ones that it does have are very interesting. One that sticks out in particular from the first part depicts Dazai on top with a smirk on his face. Tanizaki stands below in shock. Both characters hold slips of paper. This key detail is an important element of this light novel. Dazai’s ability to get the better of everyone is on full display, as well as his potential dangerousness. Harukawa carefully inks each image available, all of which are in black and white. Every bit of the chosen art include an impressive level of detail.

The biggest flaw of this light novel comes from the first chapter. It feels like padding intended to make the story appear longer than it actually is. The light novel’s title furthers this feeling; it does not mention the first chapter at all. Seeing the Agency go about their daily lives is certainly funny. But it overall adds nothing meaningful to the overarching story. It only ties into the majority of the novel tangentially. The three main characters of this chapter wonder about the origins of the ADA. The second part has some minor issues of its own as well. At times, the dialogue comes off as stiff and the relationship between Fukuzawa and Ranpo can use some more development. Ranpo’s ability also tests the reader’s suspension of disbelief. Although honestly, suspension of disbelief is not very relevant to manga in general.

The burgeoning father/son relationship between Fukuzawa and Ranpo may need some work, but it still functions as the core of the novel. Fukuzawa is a ronin – a samurai without a master. Ranpo on the other hand is an orphan. Neither of them have somebody to depend on. Fukuzawa refuses at first to accept Ranpo, consumed by the regrets of his past. For his part, Ranpo is a young boy of fourteen; he needs a home and someone to look out for him. Despite being a prodigy, Ranpo’s no skill user. This separates him further from the people around him whom he struggles to understand.

Ranpo’s self assurance is a mask to hide the dilemma raging inside of him. One of the images represents this well. At the top, Fukuzawa grabs him by the shoulder, while below Ranpo glares at him. His mask breaks; underneath the bluster and relentless cheerfulness, he’s a child terrified of a world that he can’t reconcile with. He needs a steady hand, and Fukuzawa comes to realize that he has to provide this for Ranpo. Blood is important, but family can happen anywhere, as long as you open your heart to those around you.

We’re reviewing every single light novel from the Bungo Stray Dogs series every month in anticipation for the upcoming fourth season. If you like exploring the meaning of life and death, or crime noir through the thread of friendship, you may want to take a look at our previous review of Bungo Stray Dogs: Osamu Dazai and the Dark Era. However, if you’re already familiar with Bungo Stray Dogs and would like to read the light novels for yourself, go ahead and check them out over on Yen Press. Let us know what you think of the anime and the light novels on our Facebook or Twitter!