Home » “Bungo Stray Dogs: Osamu Dazai And The Dark Era” Explores What It Means To Live And Die 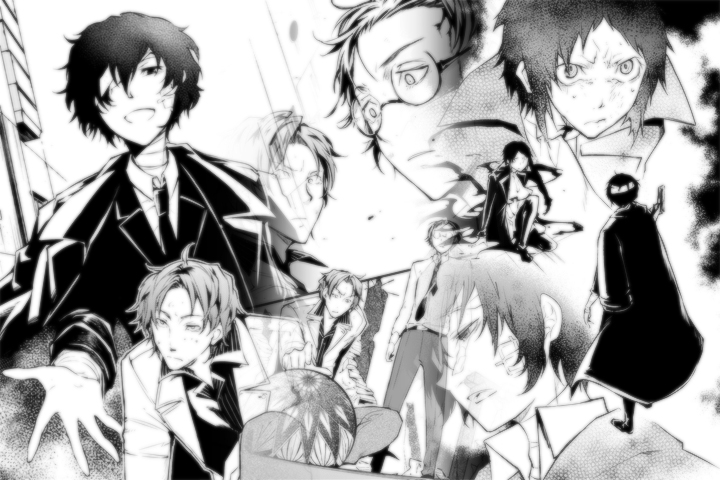 Bungo Stray Dogs: Osamu Dazai and the Dark Era is written by Kafka Asagiri and drawn by Sango Harukawa. Just like the previous installment, Dazai figures prominently in this one. Osamu Dazai and the Dark Era takes place four years into the past. A friend of Dazai’s narrates this light novel, and most of the plot focuses on him. Sakunosuke Oda – known as Odasaku by his friends – is the lowest ranking member of the Port Mafia. The action kicks off when Ango – a friend of Dazai and Odasaku – disappears. Mori Ogai – the Port Mafia leader – tasks Odasaku with finding Ango. But things begin to spiral when the presence of a violent new syndicate in Japan threatens Port Mafia.

Ango’s disappearance links directly with the arrival of Mimic. This launches a web of intrigue and lies that Odasaku and Dazai have to unravel. Over time, they discover more information about Mimic. This leads them to the realization that they may not know Ango as well as they think they do. Most of the novel focuses on the conflict developing between three different divisions; of Mimic, the Port Mafia, and the Special Division for Unusual Powers – a group that works for the government. Port Mafia has to step carefully in order to prevent the Division from cracking down on its illegal activities.

While the conflict between the three definitely spurs on the plot, there’s also significant focus on Odasaku’s personal life. It explores a lot of his motives and internal thoughts, and he comes alive as a character. The compassion he feels for those around him, and even the puzzle that is Dazai; all of these contrast well with what the reader learns about Odasaku’s past. He is a very engaging point of view character, and his ability Flawless keeps the action entertaining. One of the most intriguing parts of these last two novels is how they are titled after Dazai. Yet still, the reader never gets a chance to go inside his head. He remains a mystery to everyone around him. This works incredibly well for the story; the plot functions on a deeper level than just inter-gang warfare.

However, it does mean that Odasaku does not get the acknowledgement he deserves. That is—at least not from the title. This is a very minor complaint. On the whole, Osamu Dazai and the Dark Era is an excellent piece of work that portrays the core themes of Bungo Stray Dogs skillfully, along with the isolated themes of the novel itself. For example, Akutagawa – a character from the present-day story – has a fairly small role. Just like in the main story; he functions as an example of what can happen to an abandoned child who does not get the love that they deserve.

The majority of issues which this novel covers has a lot to do with the meaning of life and death. Odasaku represents one philosophy towards this, while the leader of Mimic represents an opposing philosophy. Dazai’s careless relationship with living factors into this as well. These characters circle around each other, giving the reader a lot more to think about as each of them develops. This novel does not have a happy ending. But there is no other outcome I can imagine that would be more satisfying.

We’re reviewing every single light novel from the Bungo Stray Dogs series every month in anticipation for the upcoming fourth season. If you like exploring the different philosphies of life and death through intriguing characters, or like inter-gang warfare, you may want to take a look at our previous review of Bungo Stray Dogs: Osamu Dazai’s Entrance Exam. However, if you’re already familiar with Bungo Stray Dogs and would like to read the light novels for yourself, go ahead and check them out over on Yen Press. Let us know what you think of the anime and the light novels on our Facebook or Twitter!