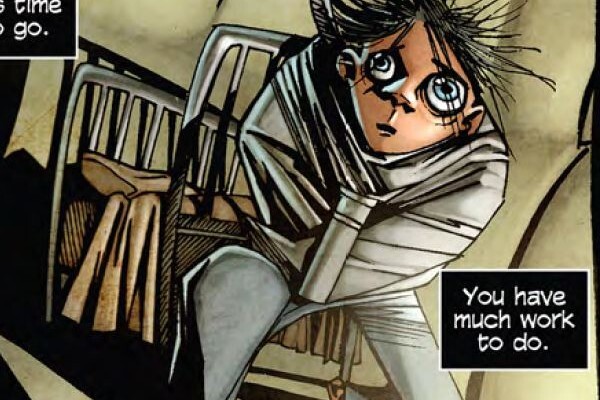 Ichabod Jones: Monster Hunter, written by Russell Nohelty and drawn by Renzo Podesta, stars the unfortunate Ichabod. Tormented by voices only he can hear; Ichabod must survive an apocalypse. Unfortunately for him, that’s the least of his worries. Memories of the past plague him as well! Through a journey that may or may not take place inside his head, he must overcome many trials. During this process, he and a ragtag group travel through a nearly endless desert. They conspire with both angels and demons along the way. The voices in his head are more visible than most, manifesting as these beings. He lets them guide him through everything, and they keep him alive. At least, for the most part.

Interestingly, Vol. 1 was written over ten years ago. Vol. 2 on the other hand came out eight years later. Throughout this process, the series underwent three different art style changes. The first style taps into Ichabod’s warped perspective, playing up the horror elements and the frenetic violence. The second style, equally strange but softer and wispier, carries a demented tone. The third style – which dominates the majority of the volumes – is more conventional. It still contains a strange essence to it that carries parts of the first two. Each of the styles have color, though the third looks the best and is the cleanest.

This series has a fascinating premise. Seeing something like psychosis addressed in a comic presents a platform for the author to educate people about this condition. Unfortunately, this does not necessarily occur in Ichabod Jones. However, the story does present Ichabod as a sympathetic character, which is at least a step forward. The skip in time between volumes does create a challenge for the story. While the basic bones of it remain the same, the direction of the story changes wildly over time. This gives the plot a fragmentary feeling.

Pacing and tone have issues of their own. The comic starts off with a dark, horror vibe to it that eventually transforms into a thrilling action adventure. Although, this may not be a bad thing. The shift in tone possibly happens intentionally as Ichabod fights his demons, both physically and metaphorically. One of the major strengths of this story comes from the shifts in time that occur throughout. The reader only sees fragments of Ichabod’s life, but the gaps leave room for the imagination to work. Frankly, this method works better than giving the reader the entire story of his existence. We see the suffering he caused, and the suffering he underwent.

Ichabod does not come across as an entirely good or bad person. He seems like someone very sick that thinks he can save the world. And in the apocalypse, he does. The skills he honed through years of murdering prove useful for survival and saving the lives of his friends. He gets to be the hero – in one reality at least. As the author leaves it vague whether the apocalypse or the mental institution that he started his journey in are real; this gives the narrative an instability that makes sense with Ichabod’s characterization, and the story as a whole.

Is it all in his head, or is it real? If you like exploring mind bending questions such as that, Ichabod Jones: Monster Hunter is available on Kickstarter. You can also read #1 for free here. Were you as confused as we were? Be sure to let us know on Facebook or Twitter!