Home » “Through Your Lens” Features Films And Flirtatiousness 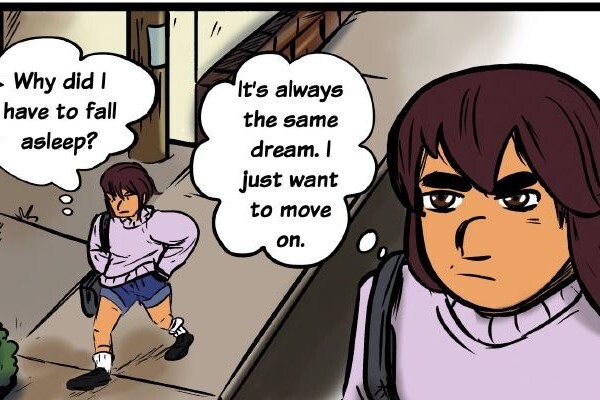 Through Your Lens, written by Jasmine Silva, begins in a convenience store. The protagonist Elena works there, though only begrudgingly. She used to be a filmmaker, before her crew abandoned her as a result of her controlling attitude. Things stay this way until she meets Tala. Tala is a young writer working on her first novel. The two of them inspire each other to reach for their dreams, and agree to work together on a project. Elena decides to get back into filmmaking by adapting Tala’s book into a screenplay for a film festival. Cinematography and awkward romance ensues.

The art style feels roomy and comfortable, reminding me of the kind of style one might find in a webcomic. Although, it does have a certain polish to it that not all webcomic creators have. This graphic novel has a matted texture, and Silva outlines everything in thick black lines. This creates an extra sketchy look that makes it appear rough without looking amateurish. Each character has their own unique appearances, and the facial expressions work well. However, the story itself does leave some room for improvement. It has an interesting premise, but Elena’s growth as a person and filmmaker does not receive as much focus as it deserves. The conflict with her old film crew gets resolved rather quickly. Just as well, the reader doesn’t see the struggle with perfectionism that led to her crew breaking off in the first place.

There’s also some loose ends that don’t receive much attention. Elena seems distant from her family, except for her cousin Gabe. The author doesn’t delve into this, but it has the potential to be more of an important subplot. Beyond these elements though, the graphic novel flows well as a whole. Elena and Tala have a compelling relationship, and they balance each other out well. Watching them encourage the other is very sweet. Elena works as a flawed protagonist struggling to achieve her aspirations. Some of her difficulty with letting others help translates to the development of her relationship with Tala. She doesn’t seem to fully understand how to manage as her feelings for Tala grow.

This creates a tense situation and heightens the drama over time. The closeness of these characters is one of the highlights of the story – even if I wish other characters such as Gabe have more time to shine. Its plot feels very focused and contained, which is not a bad thing at all. In a way, Through Your Lens functions as more than just a romance comic. It follows two young women coming into their own as creative individuals. Finding your own voice in a world that makes money off of trends and giant blockbusters is difficult. Sometimes, it feels impossible. But outlets such as film festivals exist for creators to express themselves. Through this process, Elena not only succeeds as a filmmaker, she also learns something new about herself. She finds the strength to not only look at others, but to also look inside her own heart.

What do you think the titular film is about? Want to read the quiet romance of Elena and Tala? Through Your Lens is available for purchase here. Let us know what you think in the comments below, or ping us over on Facebook and Twitter!