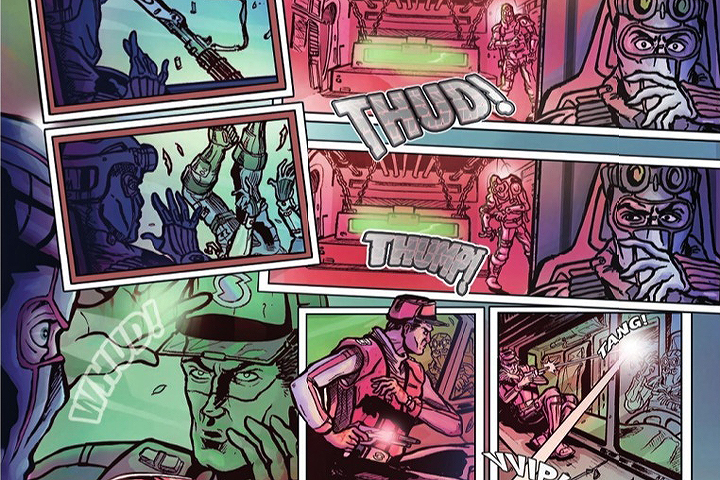 Picking up where 2005’s New Captain Scarlet left off, writer Chris Thompson and artist Connor Flanagan take us on a new adventure with our favorite hero in Operation Sabre.

There’s an ongoing war with Earth and aliens known as Mysterons. Captain Scarlet must team up with the always reliable Captain Blue and Colonel White. They band together, fighting off the enemies spearheaded by Captain Black. There’s a bit of a twist that may feel a little too close to reality. Nevertheless, the fast-pace and rapidfire action heavily reflect the dialogue and art. Flanagan manages to convey the chaos of war and battle within the comic without making it feel too all over the place. The style is very different from the computer-generated 2005 series. But the combination of Flanagan and Thompson takes us right back to the world created all those years ago by Gerry Anderson.

This new 100-page graphic novel is really enjoyable for both old and new fans. It includes a ‘previously’ sequence and some backstory so that everyone is up to speed. We also get detailed information on the different vehicles and machines, perfect to get readers involved in the world. This graphic novel also contains a bonus story called Skyfire, written by Andrew Clements, about New Captain Scarlet’s all-female pilot squad – the Angels – who get their own turn at saving the Earth.

The ending provides an excerpt of Flanagan talking about the process of adapting Gerry Anderson’s creation and adding his own personal style. Now all that’s left to wonder is: will Captain Scarlet be back?

Looking for a nostalgic read? Then New Captain Scarlet: Operation Sabre is exactly what you need. It’s available in Waterstones, so go grab your copy now! Let us know what you think on Twitter and Instagram!