Home » Sea The Horrors In “A Lungful of Brine” 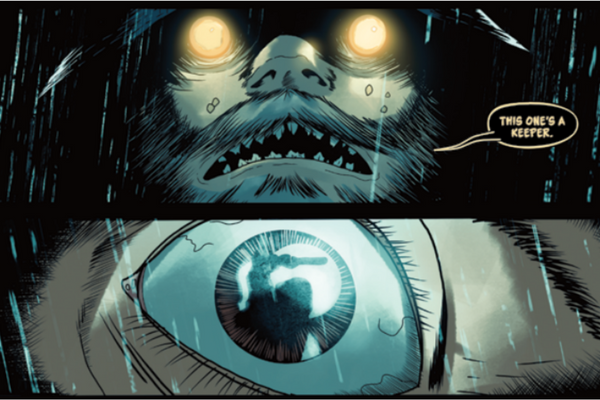 A Lungful of Brine by Dan Tappan will make every horror novice’s heart sink. With less than a hundred pages, this collection of five short nautical horror stories brings to life our what-ifs about the deep unknown. What if a monster lives down there, what if something pulls us from below, and what if it reaches the surface?

Tappan really lets his imagination run wild in these storylines. All of them gravitate towards the dark side of human desire and the possibilities of that drowning you. Every single one owns a certain spice to it; the art variations in particular often jump from clean to sketchy, with the only consistency being semi-realism and an oceanic color scheme. Speaking of color, I specifically appreciate how the duller and darker blues set a chilling atmosphere.

Alex Cormack’s cover art is beautifully terrifying. There’s just no better way to snatch a horror lover’s eyes than some skeletons underwater. At first glance, it seems to indicate gruesome scenes and maybe nightmarish creatures in the comic. That’s why it’s a bit of a surprise how tame the art styles of Bob Brice, Renzo Podesta, Matias de Vincenzo, R.H. Stewart and Nicolas Nieto are in the following pages. Regardless, there’s no denying how well-authored these stories are. Hence why, I believe A Lungful of Brine is more of a promising beginner horror. Less jump scares, more thematic depth.

The first story is ‘The Angler’ drawn by Brice. It’s a fantastic starter with a remarkable plot twist. It revolves around a man looking for a job. He happens to wander into a restaurant in a strange town, oblivious of the terror that awaits him. With no income to pay for his meal, he ends up accepting a job offered to him by the owner, even with zero knowledge on what the job actually entails. While a bit hesitant at first, his desire and desperation wins over and he takes the bait. Literally. At first read, ‘The Angler’ can come across as confusing because of its fast-paced storyline. However, diving into the smallest details, you’ll realize the foreshadowing of it all. Especially right before the climax – an incredibly genius move by the writer! Not to mention, the slow dragging of the panels really does matter here.

‘Whispers from the Deep’ drawn by Podesta follows after and it’s a tale of warning. A group of oceanographers investigate the death of a whale washed ashore. However, they get stuck on a dead end about the cause. Upon slicing it open, Marie – one of the oceanographers – finds a peculiar shell inside its belly. She decides to take it home as a gift for her son. Days pass by and her son seems to lose himself whenever he gets on “calls” with the “person inside the shell”. Alarmed, Marie decides to check for herself and is horrified to hear an actual voice from the shell. The worst part? It has control over her son’s consciousness!

The boy snatches the shell back and runs straight into the beach. There, he finds a bunch of dead whales washed up ashore. It’s a nightmarish scene where the ocean wrecks havoc and screams in raw rage. Interestingly though, it’s not a message meant just for the characters in the story. It’s also one for the readers as well. Reading ‘The Whispers of the Deep’ is like getting a taste – an image rather – of one of the many terrifying ways the waves may retaliate if we don’t stop now. Perfect representation of the quote “what goes around comes back around”.

Now, these are only two out of five horror stories in A Lungful of Brine. Other spectacular stories include ‘The Man & The Mermaid’, ‘First Contact with Pod X’, and ‘Skin Graft’. Overall, the anthology is a game-changer. It’s unconventional and the themes of desire, greed, and desperation are authentic and impactful. All for less than a hundred pages!

Ever have intrusive thoughts about the sea and the world beyond what meets the eye? Craving for a type of scare that leaves you with questions far more terrifying than what’s already in your head? If so, then you’re in for a ride with A Lungful of Brine! Get your own copy now from its official website. Share more about your deep sea fears on our Facebook or Twitter!