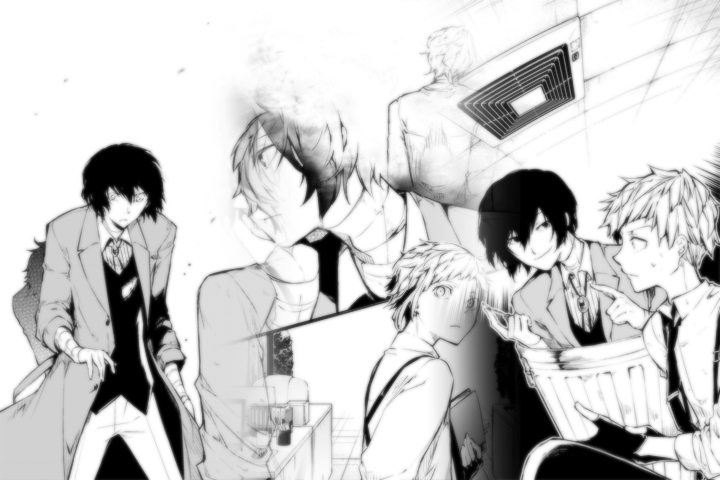 Kafka Asagiri and Sango Harukawa are back with the fourth installment of the Bungo Stray Dogs light novels. Bungo Stray Dogs: 55 Minutes strikingly deviates from the ones that came before it. Instead of focusing on the past, it follows Atsushi in the present. He and the rest of the ADA are tasked with unravelling a complex case that spans a whole island. This includes a pack of thieves, a camera-wearing terrorist, and consequences of a war from the past resurfacing. The stakes feel much higher in this one; even in just the first sentence, the entire city of Yokohama blows up. This startling occurrence leads to a frenzied race against time. As the premise spins out into an elaborate plot, characters get their moment to shine – especially Atsushi.

The color spreads and cover art for 55 Minutes receive extra attention compared to its predeccesors. Images chosen for the story are also very interesting. As the situation worsens, Atsushi starts to visually shed the nervous uncertainty that accompanies him everywhere. Atsushi is the type to chronically underestimate himself. His lack of confidence in his abilities are evident in the earlier images. The first is of him on a ship fidgeting as Kunikida shows him around; the second depicts him with Dazai, nervously rubbing his wrists as his mentor asks him to do a task that others cannot. To be honest, Atsushi always blazes the brightest in moments of peril. The last image of the fight scene shows this off very well.

While the story remains fairly focused throughout, it does struggle from being too risky on occasion. Time fluctuates in this narrative; that element stays focused – at least until the end when several twists happen in quick succession. The big reveal on the third act deserves a bit more foreshadowing. Also sometimes, the thematic elements can come across as jumbled up and confused. However, shortcomings aside, the light novel works incredibly well as a whole. Most of the intricacy of the plot does make sense. A war from the past plays an important role in the story, and the setting is imaginative and rich. Of the new characters that are introduced, the majority are compelling. One other thing to note, 55 Minutes bears a tangential tie to one of the previous light novels as well.

Like everything to do with Bungo Stray Dogs, loss and attempting to find a new purpose plays an important role in the story. The plot pushes to complex depths and tests Atsushi to the breaking point. It creates this sense of impending doom that drives him to go to lengths he normally isn’t capable of. Atsushi has to make some difficult decisions. While he does not act totally alone, he cannot rely on others in the way he often wants to. However, he and Akutagawa share some fantastic scenes together. As always, they act as incongruous foils.

Despite all this complexity and action, 55 Minutes still has those moments of quiet introspection that make Bungo Stray Dogs so compelling. This light novel in particular speculates on the meaning of being alive and present in the world. Two characters contrast strongly in how they pursue this, coming to different conclusions that make up the philosophical conflict of the story. No satisfying conclusion appears in this argument, leaving it up to the reader to decide for themselves.

We’re reviewing every single light novel from the Bungo Stray Dogs series every month in anticipation for the upcoming fourth season. If you like father and son relationships and Sherlock Holmes-esque crime solving, you may want to take a look at our previous review of Bungo Stray Dogs: The Untold Origins of the Detective Agency. However, if you’re already familiar with Bungo Stray Dogs and would like to read the light novels for yourself, go ahead and check them out over on Yen Press. Let us know what you think of the anime and the light novels on our Facebook or Twitter!