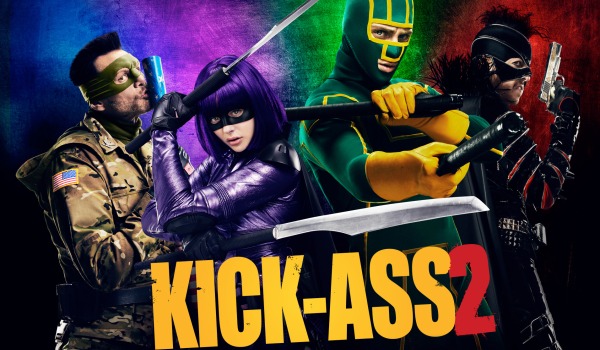 Superhero sequels are all about the escalation. Spider-Man 2, X2, The Dark Knight: they all feature villains who come about as a result of the heroes’ actions in the first film. As The Joker says to Batman, “You’ve changed things – forever”. It’s not a simple case of “For every action there is an equal and opposite reaction”; things always get worse before they get better. Case and point: The Motherf***er. In any case, Kick-Ass 2 is the first film since The Dark Knight to really pick up that theme and run with it, albeit through a gauntlet of homicidal teenage girls, aspiring supervillains in bondage gear, and castrations via German Shepherd.

Picking up more or less where Matthew Vaughn’s film left off back in 2010, Kick-Ass 2 begins with geek-turned-superhero Dave Lizewski (Aaron Johnson) having retired his alter-ego, Kick-Ass, satisfied that the streets of New York are now safe, and settled into a life of mundane teenage shit, like getting caught jerking off by his dad and getting dumped by his girlfriend Katie Deauxma over a stupid misunderstanding. Still, with their relationship out of the way, the film is able to focus more on Mindy Macready AKA Hit-Girl (Chloe Grace-Moretz), who, following the death of her father, Big Daddy, in the original Kick-Ass, is struggling to find a place between her vigilante exploits and the ordinary life that her new guardian Marcus (Morris Chestnut) wants for her. Meanwhile, the former Red Mist, Chris D’Amico (Christopher Mintz-Plasse), has become obsessed with becoming the world’s first supervillain, despite the reservations of his bodyguard, Javier (John Leguizamo).

Kick-Ass 2 is a bigger, darker film than the one that preceded it (though apparently it was made on exactly the same budget) and the first major film Jeff Wadlow has directed. A similarly self-aware take on the superhero genre – Chris D’Amico describes himself as an “evil Bruce Wayne”, his only superpower being access to vast reserves of cash, while other characters constantly remind each other that this “isn’t a comic book” – violent, profane, and very silly, Kick-Ass 2 showcases the next logical step in the world that Dave is responsible for creating: supervillains and superhero team-ups. Despite having hung up the neoprene wetsuit, Dave finds himself inevitably drawn back into the game, joining the likes of Mafia enforcer turned born-again Christian Colonel Stars and Stripes (Jim Carrey) and the goofy Doctor Gravity (Donald Faison) as part of JLA homage, Justice Forever.

There’s a lot to like about Kick-Ass 2: Johnson remains understatedly earnest and geeky in the title role while the main character development belongs to Hit-Girl, who finds herself having to be just plain old Mindy for the first time in her life, dealing with high school bitches and the general tribulations of growing up. There was always the danger that Hit-Girl would become a one-note character, an excuse to have someone who’s probably far too young swearing and throwing nut shots, but Moretz’s performance and Wadlow’s script – based on the comic book sequel by Mark Millar and John Romita Jr. – finds depth to her, a sense of conflict and someone just trying to find her place in the world. By the time Mindy is crouched on the roof of a van, readying her piece with a well earned “Game on, c**ksuckers”, it feels strangely triumphant, as though the film has earned the right to be crass, even if it has mostly been doing it throughout.


In-keeping with the theme of escalation, Kick-Ass 2 ups the violence stakes, too. In one memorable scene, Mother Russia (6’2”, 200lb Ukrainian bodybuilder Olga Kurkulina) demolishes a succession of police cars, variously murdering or incapacitating their inhabitants on a quiet suburban street. Jim Carrey, meanwhile, steals every scene he’s in – surprisingly few – as the puritanical but otherwise gleefully deranged former gangster, though it’s not difficult to get the audience’s attention when you’re siccing a dog on someone’s balls. The film’s second act is the strongest as it veers first into Watchmen territory then into outright tragedy – one of the film’s delight for fans of the comic is how is subtly subverts many of the plot points along the way. Having written off Katie, Kick-Ass even gets a new lady-friend in the form of Night Bitch (Lindy Booth).


That said, there are more than a few tonal missteps – for instance, a scene in which Hit-Girl wreaks her vengeance upon said bitches is simply too juvenile to be satisfying – and in trying so hard to up the stakes, to stress that these are real lives, real people, makes all the cartoonish massacring going on a little off-putting. Still, Kick-Ass 2 is endearingly non-PC – The Motherf***er insists on giving his henchmen equally inappropriate nicknames – and, after a strong second act, builds to a suitably ambitious climax. In retrospect, despite my initial love of Man of Steel, Kick-Ass 2 may well prove if not the best then certainly the most memorable superhero film of the summer: a twisted tragicomedy that tackles themes of loss and self-reinvention amidst the aforementioned testicular-driven violence and teenage melodrama.

Most of all, the film should stay with you because of its exploration of heroes and villains: heroes are folks like Remembering Tommy, a married couple who begin taking on crime after the disappearance of their son; super-villains, though mostly assholes, have their own baggage, too. They might bring insanity and destruction down upon those they love, but superheroes do what they do because they have a calling, however f***ed-up the reason behind it. By the end of The Dark Knight, Batman might not be the savior Gotham needs, but if it’s a choice between that and good men doing nothing, we’ll take the masked freaks any day.

SPOILERS ON NEXT PAGE