Home » TRAILER: Teenage Mutant Ninja Turtles: Out of the Shadows 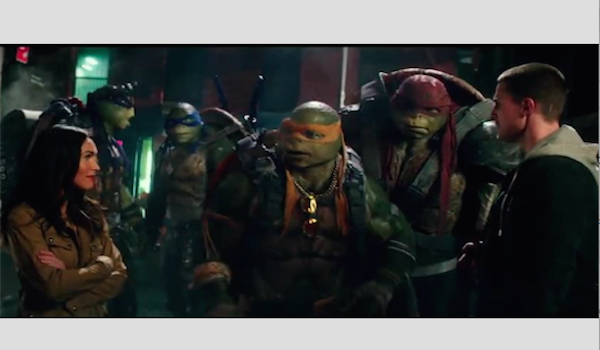 See – this is how you make a trailer that gets fans excited but doesn’t give away the most of the movie *cough* Batman v Superman: Dawn of Justice *cough*. Yesterday, we saw the first official trailer for the upcoming film, Teenage Mutant Ninja Turtles 2: Out of the Shadows. All I can say is – Wow.

Let me start off by saying that I actually liked the first film. It wasn’t perfect by any means, but it wasn’t bad at all, and it seems like society just pawned it off because we have this whole negative attitude towards reboot culture. It’s almost as if people WANTED to hate it, which is pretty stupid if you ask me. Even I was skeptical when I first saw the looks of the turtles and heard of the odd casting choices, but I still went in with an open mind, and I ended up enjoying myself! I thought it was a fun film, even if a vast majority seemed to hate it. However, I think even the haters are going to love what the franchise is doing with the sequel. If you haven’t checked out the trailer yet, here it is:

It’s a lot to take in, isn’t it? I actually had to watch the trailer twice to fully grasp everything that was happening (then I watched it another three times because I loved the music and some of the quotes). Anyway, Teenage Mutant Ninja Turtles 2: Out of the Shadows looks promising, mostly due to the amount of familiar characters and elements they’re bringing in as fan service.

First, we get a full-on look at the Turtle Van, the heroes’ basic mode of transportation. It looks like the Van consists of elements from the original 80s cartoon as well as some of the newer vehicles such as the Hauler and the Battle Shell. In the trailer, we glimpse a brief scene of the turtles chasing down some baddies in it, but I’m hoping that we see the Van in action for most of the film.

Next up, we spot Casey Jones, one of the turtles’ most formidable allies. I’ve been looking forward to Casey Jones since news broke of the first film, and needless to say, I was fairly disappointed that we didn’t at least get a passing reference to him. Then we learned that Stephen Amell aka the Hood aka the Vigilante of Starling City aka the Arrow aka the Green Arrow would be taking on the role. Initially, I was thrilled with this casting choice since I love Amell and his portrayal of my favorite emerald archer, but after seeing the trailer, I’m proceeding with caution. If you’ve watched the 80s Ninja Turtles cartoons, you’re all too familiar with Casey Jones. He’s not exactly a nice, calm person. I mean, just watch this:

He’s got kind-of a Dirty Harry demeanor, except he’s more of a psycho. That’s what I wanted to see in this film. Amell says like one sentence in this trailer, so it’s unfair to judge his character completely yet. But I’m not seeing too much Casey in him yet. Either I’m just so used to him as Oliver Queen, or he’s not selling the role entirely. Also, we only get to see him wield a hockey stick. Where are the baseball bats, croquet mallets, and golf clubs? I want Casey to use his entire sports-themed arsenal! 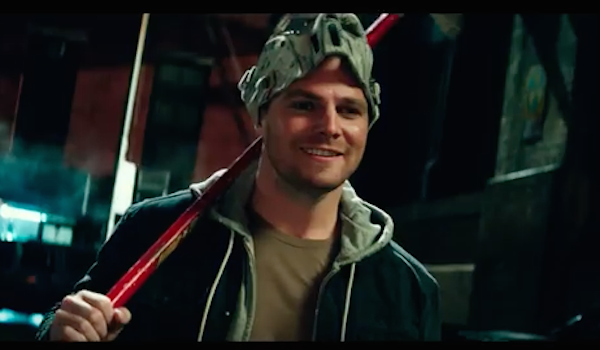 The bread and butter of the trailer has to be the list of villains. Not only are we getting a new-and-improved Shredder, but we’re also being treated to Baxter Stockman, and Bebop and Rocksteady! When I first heard Tyler Perry was being cast as Stockman, I groaned. He’s made a name for himself with a very specific type of humor that’s almost gimmicky and too cheesy for my liking, almost like Adam Sandler. But after seeing him in the trailer, I’ll admit that he’s actually fit for the role. He’s definitely got that Stockman personality that I’m used to, though I’ll have to wait until I see more scenes to make a fair assessment. And for the love of God, please let him turn into a fly by the third film!

My favorite parts of the trailer were the ones where we saw Bebop and Rocksteady in action. Again, one of the more disappointing moments of the first film (as well as the original Teenage Mutant Ninja Turtles movies) was the lack of our favorite anthropomorphic warthog and rhino. That being said, it’s awesome that they’re finally coming to the big screen. And I am thrilled that they look so good! 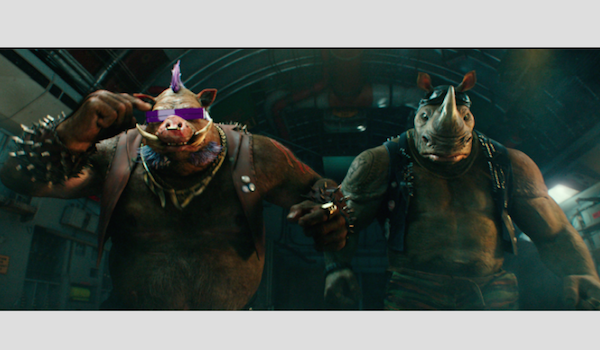 These two may look amazing, but their personalities better match up. With actor Gary Anthony Williams portraying Bebop and wrestler Sheamus as Rocksteady, it could go either way. They could properly capture the two meatheaded numbskulls perfectly, or they could butcher my favorite characters. There better be at least one scene where Shredder calls them idiots and smacks their heads together.

After watching the entire trailer in all its glory, I caught some other small issues that had me concerned. There’s a scene where a bunch of ships come pouring through a dimensional rift over New York City. I’m curious about whether this is the introduction of Dimension X and possibly Krang and the Technodrome. While I’d love to see them make an appearance, I think it’s way too much for all in one movie. I don’t want this film to suffer from over-crowding. They can leave Krang and his shenanigans for the third film. Let this movie revolve around Shredder, Bebop and Rocksteady, and Baxter Stockman. Trust me, they’re more than enough.

I also hate how much the possible-Dimension X scene reminded me of Transformers: Dark of the Moon. I don’t want to be reminded of that franchise while watching the Ninja Turtles.

Overall, the film looks promising. I think the crew realized “Hey, this is a franchise about turtles who are also ninjas – it doesn’t need to be all gritty and hardcore. Let’s just have fun and make it like the cartoon”. Hopefully, Teenage Mutant Ninja Turtles 2: Out of the Shadows ends up being as fantastic as the trailer made it seem.

Are you excited for this film, or do you think it will flop? Let us know what you think in the comments or on Twitter!