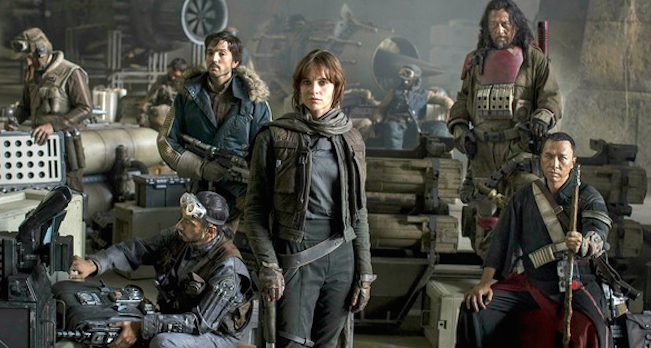 Yep, you heard right. There’s another Star Wars film coming our way. This December, Rogue One: A Star Wars Story will be hitting theaters, and today, we got our first glimpse at a full trailer! Check it out below.

First off: this is not a sequel to The Force Awakens. This is actually a prequel (or interquel if you want to get specific), which takes place shortly before the events of A New Hope. From what we’ve heard so far, the story will focus on a ragtag group of wayward rebels coming together to steal the plans for the Death Star. We’ve seen a similar setup before many times, especially in recent years. People seem to love the concept of mismatched underdogs banding together to accomplish a major goal. We saw it in Guardians of the Galaxy, and we’re going to see it again in Suicide Squad. Personally, I love the formula, and I’m a firm believer of “if it ain’t broke, don’t fix it”. Maybe this could pave the way for even more movies with a similar structure in the future?

The team will be led by a bad-ass rebel named Jyn Erso, played by Felicity Jones. According to the trailer, she’s a criminal with a bit of a record, and I have a feeling her role will play a major part in the future of the Star Wars saga. A theory I’ve seen sprouting up online is that Jyn is possibly Rey’s mother, which isn’t that farfetched of an idea. Hell, Jones and Daisy Ridley look so much alike that they could indeed pass as relatives. But I have a feeling Disney/Lucasfilms won’t make it that simple. Watch it be a complete mind-f*ck and we find out Jyn is Captain Phasma’s mother or something. Or maybe Rey is a clone. I’m open to anything at this point.

Joining Jones in the cast are some other well-known actors such as Forest Whitaker, Donnie Yen, and Mads Mikkelsen. We don’t know much about these characters yet, but the trailer shows us that Whitaker is almost definitely playing a villain, maybe one of Darth Vader’s lieutenants. And knowing Mikkelsen, he’s most likely playing a villain as well (poor guy deserves better, but that’s typecasting for ya!).

I’m actually looking forward most to Donnie Yen’s role in this film. Talk about typecasting! How much you want to bet that Yen is going to be nothing more than a silent martial arts master who kicks ass and barely says anything? I mean, it’s not a problem for me since Yen’s fight scenes are usually awesome, but I’m praying we get development out of him, and I wouldn’t mind seeing him wield a double-ended lightsaber.

The visuals are great, but nothing spectacular. When we first saw the trailers for The Force Awakens, I was blown away by the amazing landscapes and scenery. Rogue One didn’t do that for me, though I have to say that the shot of the AT-ATs was fantastic.

Last but not least, let’s look at the crew behind the film. Gareth Edwards is directing the film, with a writing credit going to Chris Weitz and Gary Whitta (who actually left the film about a year ago). Gareth’s only big directing credit goes to Godzilla, which to me wasn’t a bad film, but it wasn’t great either. It was so-so. Weitz is responsible for writing mediocre-to-poor films such as The Golden Compass, Antz, and About a Boy. Whitta has provided the writing for the abysmal After Earth, and one of my favorite post-apocalyptic movies, The Book of Eli. So we’ve got quite a cast of characters working on this film. I’m very critical of directors and writers when looking at a movie, but I’ve seen first-hand that some people can surprise us with great films despite a poor history (Peyton Reed did an exceptional job with Ant-Man). Therefore, I honestly believe Rogue One could go either way, but I’m leaning more towards the optimistic side.

Other than that, there’s not much else to say about the film. I expect it to be a very simple, straightforward story with an emphasis on character development and action. I was impressed with The Force Awakens, so I have high expectations for Rogue One.

What did you think of the Rogue One trailer? Do you believe it will be a great installment, or should Star Wars take a break? Let us know in the comments or on Twitter.