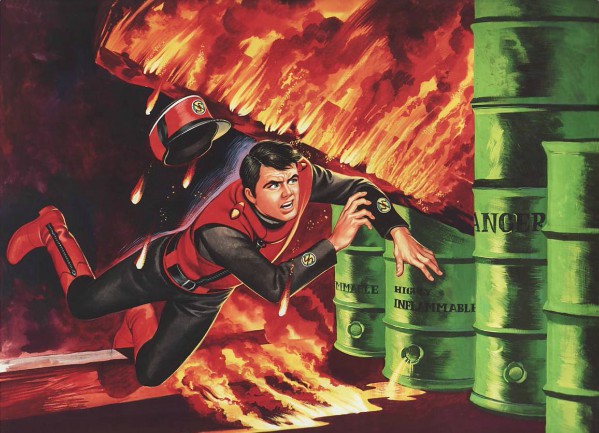 September 2017 will mark 50 years since the world’s top security organisation accidentally triggered a war of nerves against an omnipotent alien race into motion. Or rather, won’t September 2017 mark 50 years BEFORE such war begins, given Captain Scarlet and the Mysterons taking place in 2067?

Either way, Gerry & Sylvia Anderson‘s landmark sci-fi TV series will be hitting one heck of a milestone, and to celebrate Spectrum’s anniversary, audio drama masterminds Big Finish are putting together several special audio releases – a Captain Scarlet 50th Anniversary boxset, containing remastered edition of five original audio adventures released throughout the late 1960s, a new audio documentary, eight classic episodes from the original TV series with audio narration, and more. Additionally, we’ll also be getting three enhanced audiobook adaptations of the three Captain Scarlet and the Mysterons paperback adventures written by sci-fi author John Theydon. These three novels, known as the Spectrum Files, have been out of print almost since their original publication between 1967 and 1968.

It’s safe to say we fans won’t be going hungry this September! All four releases can currently be pre-ordered from the Big Finish website here, and we managed to catch up with Big Finish maestro Nicholas Briggs and Jamie Anderson, director of Anderson Entertainment and Gerry’s son, to find out more about this audio venture.

A Place to Hang Your Cape: To start with, we simple fans aren’t just being treated to one, or even two releases from Big Finish, but four! What made the two of you want to celebrate Captain Scarlet’s 50th in such a way?

Nicholas Briggs: It was Jamie who came with us to the suggestion. We’d been aching to do more Gerry Anderson stuff for Big Finish, so this seemed the ideal opportunity. And luckily for us, ITV Global Entertainment thought it was a great idea too.

Jamie Anderson: I knew Big Finish wanted to do more Anderson stuff beyond Terrahawks, and I’d talked with Nick about the Captain Scarlet idea for some time… eventually the stars aligned, and here we are!

AP2HYC: Amongst many other tasty looking treats to tuck into, the main boxset will feature five remastered audio dramas originally released during Captain Scarlet’s original broadcast run in the late 1960s – what was it like bringing those cult recordings back to life?

Briggs: Jamie has been working with one of our technical audio geniuses, Benji Clifford, who’s also a massive nostalgia fan. So Jamie and Benji have been working very closely on this, making the recordings sound better than they ever have done before.

Anderson: Yep – working with Benji has been awesome. He’s basically a 60s child who has been displaced in time and ended up here. So he’s been utterly respectful of the 60s audio vibe and warmth, and it’s been a really lovely experience bringing them up to scratch for a contemporary audience’s modern ears.

AP2HYC: What do you think these audio adventures bring to the world of Captain Scarlet and the Mysterons?

Briggs: The brilliant thing is that they’re from the time. They’re not a recreation. They’re actually slices of TV history, designed specifically for the audio format. Brilliant!

Anderson: Yes – the fact that all of the audio adventures on this set are from 1967 means that we’re presenting an expanded Captain Scarlet universe with material from the time. And I think that’s very exciting.

AP2HYC: A further eight classic episodes of Captain Scarlet and the Mysterons are also featured, each with linking narration from Captain Blue himself, Ed Bishop. How did it come about that Ed produced these narrations?

Anderson: Back in the 1990s, the ITC library was controlled by the now defunct Polygram. A team was commissioned to adapt these original TV stories for audio cassette release. The team wrote linking material for Ed Bishop (Captain Blue), recorded it and edited the stories together… But the adapted stories were never released. Some of the stories have previously been released to members of Fanderson, but this is the first time all 8 stories have been released. They’ve also undergone extensive remastering work, thanks to Benji!

AP2HYC: Which classic episodes are these exactly?

AP2HYC: Also included in the boxset is a new, 60-minute documentary. There’ve been an awful lot of documentaries on Gerry Anderson productions produced in the past – what’s unique about this one?

Briggs: This is very specifically about Captain Scarlet, and Jamie has all the right contacts to make this the ultimate guide and celebration to the world of Spectrum and their fight against the Mysterons.

Anderson: We’re not just covering the usual ‘what Scarlet was all about’ in this, but delving into a variety of aspects about the production including the advances in puppetry and special effects, but perhaps most crucially we’ll be extending our reach beyond the TV series into the book, comics and merchandise.

AP2HYC: Surely a twist in the tale is the news that we’ll also be getting audiobook adaptations of cult sci-fi author John Theydon’s three Spectrum File novels, which have been long out of print for decades – where did the idea to rejuvenate these come from?

Briggs: Again, this was Jamie’s idea. With Thunderbirds Are Go, the new CG animation children’s series, currently in production, ITV would prefer it if no new Gerry Anderson based fiction was created — which is absolutely fair enough. So, we were looking for ways of perhaps doing Captain Scarlet adventures that would stay within the boundaries of that rule. And, of course, these books are pre-existing pieces of authentic merchandise from the time of the TV series’ original run. But they haven’t been in the spotlight for decades, so they’ll feel like brand new adventures. They’ll certainly sound that way.

Anderson: I’d always known about these stories, but having picked them up and read them for the first time, it seemed a no brainer to me! Expanding the Captain Scarlet universe with these beautifully put together John Theydon novelisations seemed, to me, to be something that fans of the series would love.

AP2HYC: Why re-create them as audio books? Why not simply reprint the original paperbacks?

Briggs: Because Big Finish is all about audiobooks and audio drama. It’s what we do. And we wanted to bring them to life in our favourite format. I think this is far more exciting than just reprinting the books. When you make audio, you give an unique catalyst to your audience’s imagination. It’s like a book coming to life in your ears.

Anderson: We’re giving these books a whole new lease of life – in a way that is only possible through audio. This felt like a great way to celebrate the 50th. Creating something new and expansive from something classic and very much tied to the original Captain Scarlet universe.

AP2HYC: Who exactly will be in these audiobooks? A full cast or a snug, armchair narrator?

Briggs: These are what we call enhanced audiobooks. So they’re not just a single reader. There’ll be two voice actors involved and there’ll be full sound design and music to really bring it all to life.

Anderson: Yes – casting to be announced. But the enhanced audiobook style will work really well for these stories.

AP2HYC: These releases promise to paint a vast picture of Captain Scarlet’s extended universe – what do you think is so appealing about these spin-off adventures?

Briggs: One for Jamie, I think. But for me, it’s the authenticity of them having been written at the time.

Anderson: Well – for one, we get to see a little of the TV21-ness of the Anderson universe, in that Spectrum teams up with the World Space Patrol from Fireball XL5, which is rather fun! But we’ll be heading off into space, under the sea, and into the skies with these stories. They’re a real treat, and go much further than the TV series was able to. The scale of the adventures is really exciting, and that’ll be a real treat for listeners!

AP2HYC: What’s been the most rewarding aspect of this project for you both, so far?

Briggs: Jamie’s the one working most closely on it. But testing out the kinds of music we’re going to have on the audiobooks, hearing about how the restoration of the original audio tapes is going… and the fact that ITV have been so enthusiastic and supportive of it all.

Anderson: I think for me, it’s been preparing the novelisations for the recording. Getting so in-depth with these stories, and really getting to grips with them has been a real thrill. But to be honest, every time I hear the Century 21 sting and Captain Scarlet opening titles, I get a lovely shiver down my spine! The whole process has been an absolute treat.

Briggs: No concrete plans, but it’s no secret that we’d like to do more Anderson projects at Big Finish. I’d love to do Thunderbirds, Stingray, UFO… Well, you know, all of it, really! This is such an essential part of my childhood. I met Gerry twice and enjoyed chatting to him. I was quite overawed by meeting a living legend at the time! To use a crazy analogy, I’ve often said that if my life were a stick of rock, Doctor Who would be written right through it. But there are also a couple of stripes of rich colour there for all the Anderson series, and The Prisoner!

Anderson: Big Finish is, for me, the natural home for potential Anderson audio adventures – so I’m really hopeful that there’ll be the opportunity for them to do more in due course. I’m very grateful to Big Finish (and Nick in particular) for involving me so heavily in these productions – since they could be using any of their very talented team – it’s a great pleasure to be able to take such a key role in bringing Terrahawks and Captain Scarlet and the Mysterons to life on audio. I certainly have some ideas for some adventures of other ITV-controlled series, so let’s see. But I really hope it’ll happen one day!

AP2HYC: It’s great to see this project come alive in celebration of Captain Scarlet and the Mysterons turning 50 years old. Why do you think the show has remained popular after all these years?

Briggs: The Anderson TV series are just such strong, bold storytelling with great characters and superb design. They’re really exciting pieces of television that, once seen by a child hungry for great stories, are never forgotten. They’re very much part of all the joy I feel for creating stories. And I think that sort of popularity never dies.

Anderson: For me it’s about stories and themes that never spoke down to you as a kid. You felt like a grown up watching these shows originally. But it goes far beyond that. By not pigeon-holing the series for a certain age group, it’s meant that audiences felt comfortable – excited, in fact – to revisit these shows over and over again well into adulthood. And that, for me, is at the centre of the enduring popularity of these marvelous shows.

Don’t forget A Place To Hang Your Cape’s senior editor and super-Anderson fan Fred McNamara is also writing a book celebrating Captain Scarlet and the Mysterons. Titled Spectrum is Indestructible, more info on the book can be found here! Spectrum is Gold!

Are you excited for these releases? Let us know in the comments section below or send us a Tweet!