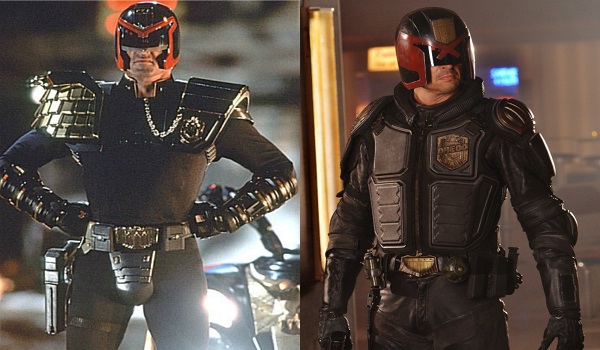 It’s been 40 years since the first appearance of Judge Dredd in 2000 AD way back in 1977. Since then there have been two film adaptations of post-apocalyptic lawman Judge Dredd, 1995’s Judge Dredd and 2012’s Dredd. Despite the identical source material, the two films are wildly different in tone. 1995 included many comedic elements, mainly from the interactions of Sylvester Stallone‘s take on the titular character and Rob Schneider‘s comic relief character Fergee. 2012 played the material perfectly straight and deadly serious and focused more on Karl Urban‘s Dredd as a character, especially played against Olivia Thirlby‘s Judge Anderson. In a side-by-side comparison, the 2012 film is by far the stronger of the two and a much truer interpretation of the source material.

The 1995 film is, on the surface, based far more heavily on the comic. It certainly spends a much greater portion of the runtime on world building. The characters are all from 2000 AD and some of the minutiae of Mega-City One politics is given attention. The plot of the movie is even taken from the Judge Rico storyline on the comics. Despite this, the core of what makes the world of Mega-City One unique is ignored. A sense of whimsy pervades the film and much of the violence was edited out in an (unsuccessful) attempt to achieve a PG-13 rating.

On top of all that, Stallone’s Dredd takes off his helmet. You see, Dredd as a character concept is interesting. He isn’t even really a character in the traditional sense, he’s a force of nature. He is the law. For Stallone’s Dredd to remove his helmet, he becomes too human to properly portray the character. Dredd must always remain faceless because the law is faceless.

The 2012 film had an original story. Most of the characters were made up for the film and had no origins in comic canon. Despite this, the story is much more reminiscent of the world that Dredd occupies in the comics. Desperation runs rampant in every level of society. The Judges actively admit that they’re losing the war for the city. The citizens of Peach Trees are barely scraping by the day to day existence of abject poverty. The MaMa clan’s entire operation is one raid away from collapse. Into all of this comes Dredd, the faceless avatar of the law itself. That’s what Judge Dredd was about in the comics, and that’s the kind of story told in the 2012 film.

1995 takes the wackier and more bizarre elements of 2000 AD and runs with them. 2012 takes the concept of a bleak, dystopian setting and runs with it. This difference in interpretation pervades the entirety of both films. 1995’s costume was much truer to the comics, and sets the tone for the color pallette of the film. It’s overall vibrant and more than a little campy. 2012’s costume, and entire color scheme, is dark, almost oppressive in tone. The reds are muted, the blue is almost black, and the gold shoulder plates have been replaced by tarnished insignias. Then again, the world of Mega-City One is bleak and oppressive. Which isn’t to say that 1995 is necessarily a bad movie. It wasn’t my particular cup of tea, but it has a certain B-movie charm. Ultimately, what separates the two is that the 2012 film recognized what made the character and world of Judge Dredd resonate with readers of 2000 AD and the 1995 film did not.

Think I think too much? Think I should give it some more thought? Think I’m strange. Sound off in the comments or send us your thoughts on Twitter! Nag my bosses @AP2HYC or nag me personally @Bard_Brehon.