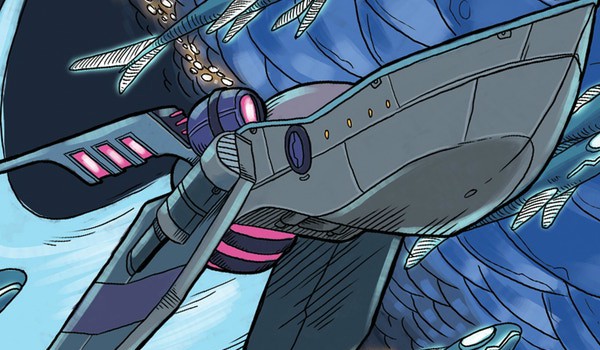 Who doesn’t love their comic book heroes sharing a universe bursting with adventure and excitement? After all, one of the joys of reading Batman comics is that which ever criminal he may be delivering justice too, Superman, The Flash, Wonder Woman and more are all around the corner, also engaged in their own adventures.

That’s the USP Big Punch Studios have gone for with Extraversal, their flagship anthology comic featuring multiple tales of sci-fi, fantasy and more, all living in side the same world. The comic accompanies Big Punch Studio’s other titles, Nich Angell‘s 7STRING and Jon Lock‘s Afterlife Inc. Originally born as Big Punch Magazine back in 2014, the comic has gone from strength to strength and is currently on Kickstarter raising funds for a collected edition of the comic’s first four issues.

We caught up with Big Punch’s very own Nich Angell to find out more about this spellbinding comic!

A Place To Hang Your Cape: To start with, what is Extraversal?

Nich Angell: The Extraverse is the multiverse in which all Big Punch Stories take place. Like Marvel and DC have their contained universes, so do we. Extraversal is a quarterly magazine that we release every 3 months that tells multiple stories, episodically, all set within our greater ‘Extraverse’. Extraversal isn’t an anthology, it is multiple views on the one story.

AP2HYC: Why did Big Punch want to bring this comic to life?

Angell: Quite honestly we were bursting with stories and had a grand idea of them all contributing to each other’s mythologies to tell one greater story overall. We were originally faced with introducing these as interlinking graphic novels but not only would this be a huge amount of work over a huge amount of time, but it would force our readers to have to pick up all the books seperately, just like Marvel and DC do. So we came up with a magazine that serialises them all in one place. Its like a whole comic book shelf in one publication!

AP2HYC: Walk us through the individual strips – what is it that each of these strips bring to Extraversal?

Angell: Cuckoos is our headline story and serves as your guide to the incredible variable wonder of the Extraverse. We see what life is like outside the myriad universes in the Extraverse itself and follow a crew of an inter-universal ship.

Orb is the story of an alternate history New York, threatened by the appearance of a giant stone warship hanging in the sky. Orb shows us how similar some of the universes can be to our own while being part of the greater mythology in a major way.

99 Swords follows the adventures of Tyler and Elsie as they attempt to collect all 99 legendary swords in their Sword Universe! 99 Swords is our light-hearted cartoon adventure with lots of humour and magic along the way.

The Wall chronicles Cyanne and her team of multi-coloured ‘catchers’ as they attempt to catch the colourful crystals that rain down on their walled city home. The Wall is colour and action through and through and teaches us about the fundamental building blocks of the Extraverse.

Finally Cat and Meringue is the continued adventures of the daft feline and pudding duo from Nich’s pen! It is stupid and silly and shows just how abstract and fun a universe can really be!

AP2HYC: Where did the inspiration for this comic come from?

Angell: Extraversal takes its cues from Shonen Jump and the Tintin magazine (from ages past). Its main inspiration though, was just solving the problem of wanting to tell multiple stories at once without people having to wait. We think that it has ended up growing into something quite unique. You don’t see many regular, episodic comic magazines that have stories that all take place in the same world.

AP2HYC: What’s the background to the individual strips themselves? Were some created exclusively for Extraversal, or were others, like Cat and Meringue, already in existence before Extraversal?

Angell: Cat & Meringue were obviously in existence before, and the The Wall, 99 Swords and Orb, were all stories that one or other of us had come up with and written but didn’t know what to do with, as we were so busy with our bigger graphic novel projects. Extraversal was the perfect home for these young stories to grow and develop. Cuckoos was the only one written specifically for the magazine and really ties everything together.

AP2HYC: Two of Big Punch Studio’s other comics of course are 7STRING and Afterlife Inc. What’s it like juggling together this multiverse across numerous comic books?

Angell: SO. MUCH. FUN. Honestly, it adds so much more to every story involved to know it is part of something so much bigger. 7STRING especially has been affected quite substantially by the revelation that it is part of the Extraverse, but in a majorly positive way. It has improved its relevance and the stakes in its story.

AP2HYC: How might 7STRING and Afterlife Inc. themselves fit into Extraversal?

Angell: Just wait until Year 4 of the magazine, 2018. Oh the things we have planned!!

AP2HYC: Extraversal has existed for a couple of years now, and can still be bought via subscribing. Why did you want to do a Kickstarter for the comic?

Angell: The magazine will always be available for subscription both physically and digitally and this is the primary model and the way we hope most will consume it, as it is how it has been designed and built. The Kickstarter is simply for the collected graphic novel edition of the first year (collecting the first 4 issues). We will release GNs for each year of the magazine for those who prefer to consume their comics in trade paperback format.

AP2HYC: As of this interview being published, the Extraversal Kickstarter has exceeded its initial target by 130%, where might Extraversal go from here?

Angell: We have some ideas for stretch goals but really any more money we make we will plunge back into the book improving its quality or size of print run to ensure we have stock for the future. If it really explodes I suppose we could put money toward the printing of Volume 2!

AP2HYC: Might there be any plans for a gargantuan, multiverse Big Punch crossover akin to The Heavenly Chord?

Angell: Haha… if anything, that is the whole purpose/raison d’etre for Extraversal. Again… Year 4, 2018. That is when the big stuff all starts to happen.

AP2HYC: What would you say it is that each of you brings to Extraversal?

Jon Lock: Words that could cut a meteor in half.
Lucy Brown: Lettering and writing that can bend spacetime.
Alice White: Video and design skills that realign planets.
Nich Angell: Doodles in a dark room.

AP2HYC: What might be the best thing about working on a world-spinning anthology such as this?

Angell: When you have a rich but structured mythos and world that you have built yourself, there is no greater joy than realising an amazing opportunity to create an amazing moment or character that although founded in the world, does something exciting and new with it.

Planting seeds in dialogue and backgrounds to explosively reveal later, we are nerds, revelling in our own sandpit and before anything else we are doing this for the pure love of it. It’s a great bonus that we have fans who are along for the ride as well!

You can check out our coverage of Extraversal, 7STRING and Afterlife Inc. on AP2HYC’s archives. Are you already a fan of the comic? Have you backed Extraversal: Time to Fly on Kickstarter? Let us know in the comments section or send us a Tweet!