Home » The Guys’s Risque Humour Continues to Delight with #6 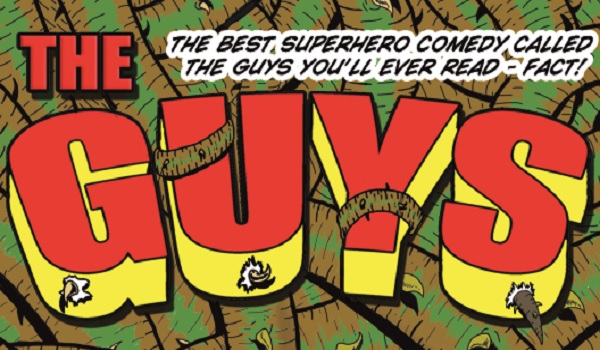 As 2017 comes to a close, people everywhere are starting to think about their New Years’ resolutions; ditching bad habits, getting in shape, obtaining more gold, purchasing a new car, or simply just being a better person all around. Yes friends, New Years’ resolutions can be challenging, but nothing is more challenging than the annual game of danger I like to call: “Capturing Santa Claus.” This year I have compounded my usual bear-trap, trip-wire, electrified-fireplace plan with remote sleeping gas mines. I can’t lose! If that jolly old “Saint” Nick thinks he’s going to get his hands on my Christmas tree this year, he’s got another thing coming.

Ah yes, but that is not the purpose of this day. While I sit patiently not unlike a snake that waits for its prey, I figured we would take a look at the newest installment of Richard Carrington‘s The Guys! Not so long ago we had the pleasure of reviewing issue 5 of Carrington’s hilarious superhero parody, so having the opportunity to review issue 6 is something of a Christmas miracle. In fact, it is a Christmas miracle, and since miracles are fleeting, we should hurry up and get a spoiler-free look at The Guys #6!”

If you aren’t familiar with The Guys, it is about five friends who use their newly discovered super powers to battle evil and villainy. In the previous issue, Chris, Vinnie, Eddie, Billy and Al made a name for themselves as “The Guys” when they defeated the nefarious might of The Shifter and saved the city of New Chester. This also marked the very first time the team wore their superhero costumes and truly became Captain Fantastic, Veto, Force, Floater, and my personal favorite, Colonel Incredible! 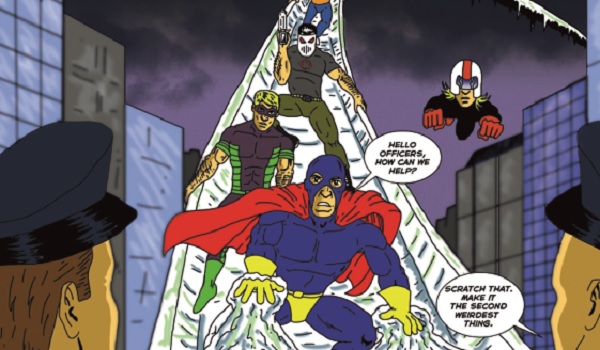 This issue deals with a new threat in the form of the ancient Count Vyle and his hulking henchman, The Lump. After being accidentally released from a magical prison, Count Vyle and The Lump seek out new avenues of destruction and enslavement. While watching Baywatch reruns at a bar (yes, seriously), Count Vyle and The Lump learn of The Guys’ courageous deeds around New Chester and decide to challenge our heroes to sweet, glorious combat.

Meanwhile, Mayor Miller negotiates a contract with The Guys that ensures they will be paid $1,000.00 USD (yes, one THOUSAND) a piece every time they save the city, as long as they remember to mention Miller’s name in front of the voting public. Sounds like a solid deal, no? At times, Mayor Miller comes off as vaguely corrupt; not in the “plotting to take over the world” sort of way, but more so in the “plotting to fatten his own wallet” sort of way, which is okay with me.

With New Chester covered in giant, thorny beanstalks and its citizens turned into statues, it’s up to The Guys to take on Count Vyle and The Lump to save the city. Here, we get a nice look at each of The Guys’ individual powers, such as Force’s super strength and Colonel Incredible’s…ski mask…ehem. Seriously though, this issue does feature a whole ton of Colonel Incredible, and he plays a central role in the climax of the story, without giving too much away. 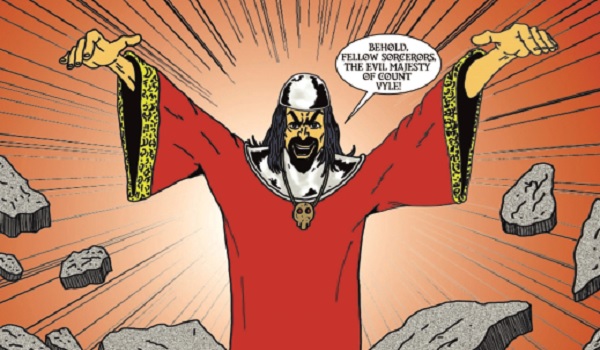 I’ve said this before and I’ll say it again: anything Carrington produces is absolutely hysterical, and this issue of The Guys is no different. It’s almost impossible to make it through a single page without at least a chuckle. The comedic elements of the script are so on point that the story could literally be about nothing and it would still be immensely enjoyable to read. Happily, the story also delivers and manages to offer enough intrigue to keep you turning the pages as you laugh uncontrollably.

There are some homages sprinkled throughout this issue, such as Count Vyle and The Lump’s “Thor-like” font as they speak quasi-ye olde English which, I would also like to add, leads to many hilarious moments. For example, in the aforementioned Baywatch viewing scene, Count Vyle remarks that Mitch Buchannon (David Hasselhoff‘s character) “must surely be the bravest knight” and that Buchannon’s hair “defyeth nature itself,” much to the bewilderment of the bartender. We also get a well placed homage to the now infamous Twilight Zone episode “Nightmare at 20,000 Feet.” You know, the one with the whole “something on the wing” thing?

The artwork in The Guys is also handled by Carrington, and he does a smashing job at it. His character designs always make me laugh, which I’m fairly sure is intentional, and his characters’ expressions are always perfect in any given situation. Carrington has done an excellent job at depicting The Guys as literally a bunch of guys that just found out they have super powers. Some of their costumes, especially Colonel Incredible’s (<3) look like something that was found in a pile of laundry and hastily thrown on, which is great. The bright colors throughout the book compliment the humorous tone of the script incredibly well, and the whole experience of reading an issue of The Guys really is such a pleasure.

Fair warning #1: The Guys contains a tremendous amount of adult language and humour, making it positively not for children. So if you have children or you are a child, that would be… you know,…something to look out for. Fair warning #2: This book is so funny, that you may wind up with internal injuries from laughter and hypertension, so keep that in mind. Other than that, I can easily recommend The Guys to anyone who likes a good laugh when they’re reading comics, so check it out!

What do you think of The Guys? Is it the gut-busting adventure you’ve been looking for? Let us know in the comments section and on our Twitter page!