Home » 8 Comics to Be Your Valentine 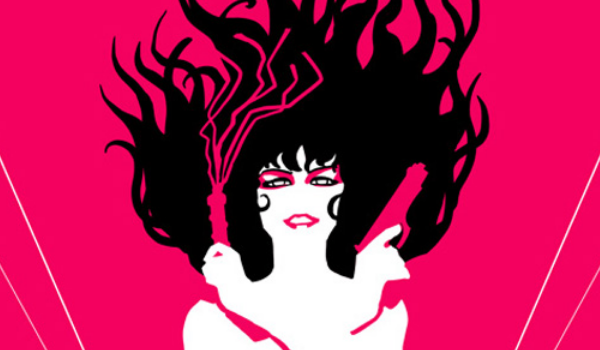 As we come upon another St. Valentine’s Day we here at A Place to Hang Your Cape have been reflecting on love. Is there anything greater? Only comics about love! So now presented for all you lovers and lovelorn alike, here are our eight picks for Valentine’s. Perfect for sharing with that certain special someone, flaunting at your local bar, or simply helping you forget the crushing weight of your own loneliness.

Now before we begin do be aware that most of these titles are most definitely Not Safe For Work and half are explicitly pornographic (or erotica if you want to be fancy). So you’ll probably want to avoid opening any links at work, on the metro, or at your gran’s house. 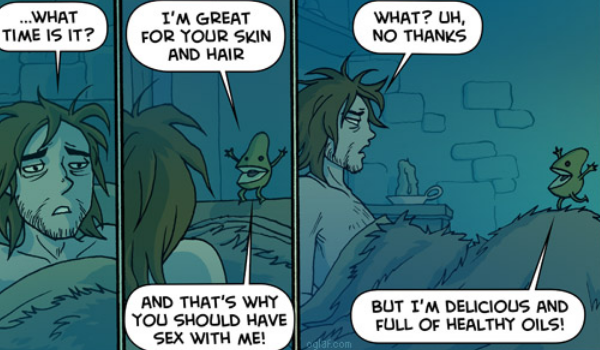 On their first visit to Oglaf readers are informed that the comic was initially an attempt at pornography before quickly turning into the fantasy/comedy it is today. Needless to say it is very much NSFW. In a series of mostly stand-alone comics Doug Bayne and Trudy Cooper bring us folks cursed with being the best at blow jobs, shape-shifters with a dubious grasp of human sexuality, and eldritch horrors made entirely of cocks.

No matter how weird things get, Cooper illustrates them with clean, high-saturated art. Her characters are consistently expressive and flexible which, given the subject matter, is of great importance. Also impressive is her range when it comes to landscapes. Taking on classic fantasy tropes, Bayne and Cooper bring us epic battles, enchanted forests, and ominous castles. All illustrated with an eye towards the classic sword-and-sorcery aesthetic. As for plot, most comics stand alone. There are occasional call backs, reoccurring characters, rare stories that span a couple weeks, but generally Oglaf is less concerned with continuity as it is with good ol’ fashioned filth. It’s a welcoming comic, and very easy for new readers to join the fun. 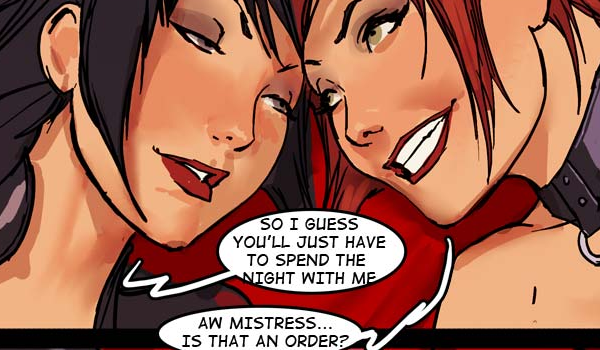 But the spicier aspects of Sunstone really take second place to the relationships and characters. Lisa and Ally’s giddy passion, the comfortable friendship among folks in the scene, the awkwardness of accidentally outing yourself to a co-worker. This liveliness owes a great deal to Šejić’s incredible art. While he does a fantastic job capturing leather and PVC, he’s strongest when portraying movement and expression. If I had one complaint it’s that the body types are fairly homogeneous. Though having seen his work in Rat Queens, this isn’t due to lack of technical skill. However this is a relatively minor gripe and overall Sunstone is a visual delight. So pick up a copy, or head over to his Deviantart account (assuming you’re somewhere you can look at some explicit nudity and sexuality), if you want something a little sappy and very sexy. 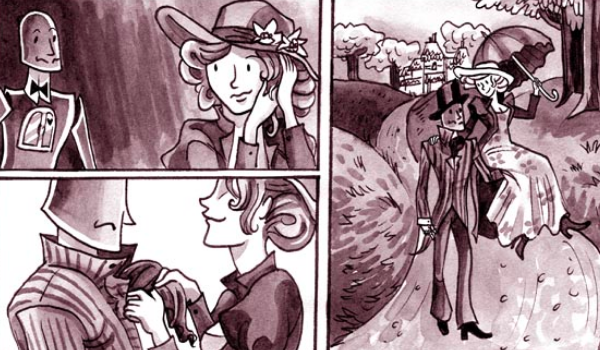 One of the most explicit entries on this list Chester5000 XYV is a sweet, sexy comic about relationships and desire. When a scientist neglects his new bride she falls into a state of deep depression. So he decides to make her a robotic lover. This is clearly the easiest and most sensible solution. While Pricilla is at first coy with her new friend he quickly wins her over with his charms and the two become sexually and romantically involved. Far from being cold or unfeeling Chester is an attentive, sensitive, and kind companion. However, while the scientist is fine with their sexual relationship he’s less than thrilled by their emotional one. So he decides to set the robot up with a neighboring widow. However Chester and Pricilla are not so easily foiled.

Sex is a big part of this comic. Chester was created in order to satisfy Pricilla, and satisfy he does, in most bold a fashion. Jess Fink has done an amazing job of creating erotica where sexuality is passionate, engaged, and above all deeply emotive. Visually Fink draws with wonderful expressiveness, a particularly important trait as the comic is almost entirely wordless. She beautifully illustrates her Victorian/Edwardian world with an almost art nouveau sensibility, especially when it comes to the more explicit scenes. Panels appear in curling frames, bodies are fluid, and gracefully exaggerated. So come to Chester5000 XYV for playful sexuality and nuanced emotional growth. And make sure to check out the sequel George and Isabelle to fill in some of the spaces in the original. 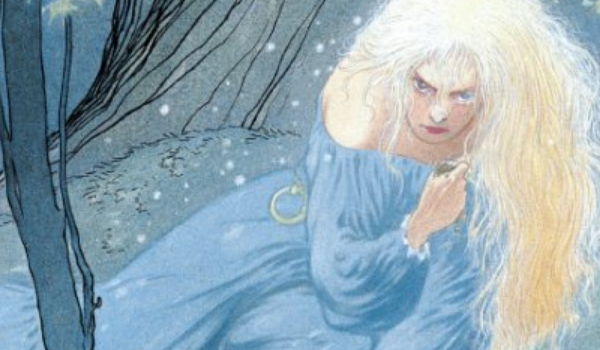 A classic from Neil Gaiman and Charles Vess, Stardust follows Tristran Thorn from the sleepy village of Wall and into the fantastical land of Faerie. Gaiman starts in 19th century England with a promise from Tristran to his lady love to retrieve for her a fallen star. What Tristran lacks in practicality he makes up for in lavish romantic gestures. Unfortunately the star lands in Faerie and turns out to be less a massive ball of fire than a rather headstrong young lady. But Tristran is a man of his word and he’s determined to bring this headstrong young lady back to the world of mortals. On the journey home they must deal with witches (some more skilled than others), a bunch of murderous princes (though they really only want to murder one another), and of course, their feelings for one another.

Even if you’ve already read the novel and seen the film, Stardust is worth picking up in comic form for the artwork alone. Vess is well practised in illustrating Faerie and this is him at his best. Alternating between sharpness and softness, the gorgeous and the grotesque here we find Faerie in all its glory. Along with these lovely illustrations there’s Gaiman’s classic story of magic and love. Gaiman brings his characteristic eye for folklore, making the story feel much older than it actually is. Perfect for the person longing for an escape, Stardust is a fantasy of adventure, beauty, and a literal fairy-tale romance. 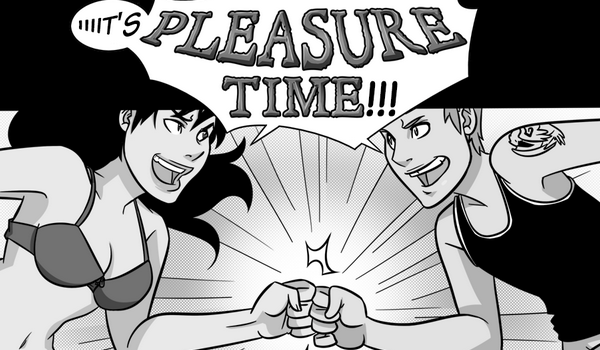 3. Sailor Twain or the Mermaid in the Hudson 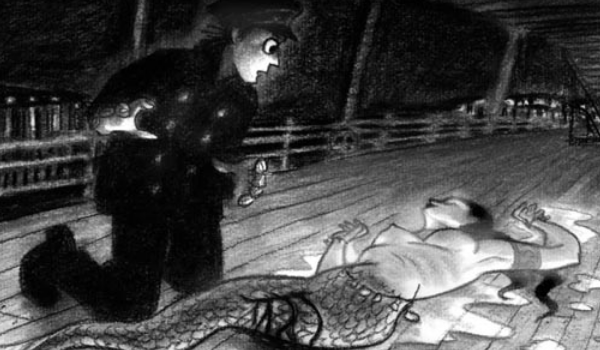 Set on the beautiful Hudson River, Sailor Twain follows the titular captain after his friend and employer dies under mysterious circumstances, leaving both the boat and company to his twin brother. If this weren’t enough stress, one night the good captain finds a wounded mermaid on deck and decides to help her. Now along with running a ship, Twain has quite the secret to keep, from both his crew and his wife. Not long after he starts living with a mermaid in his quarters does he fall in love with her. It’s a relationship with great implications for both his personal life and the very nature of the river itself.

Artists and writer Mark Siegel has a firm grasp of the details of the late 19th century, drawing the rigid interior of a steamship with the same attention to detail as the fluid grace of a fine dress. The Hudson River and valley region is similarly depicted with such style, subtlety, and care as to practically qualify as a character in and of itself. Meanwhile Siegel’s stylized faces and figures allow for a great deal of versatility and expressiveness. As for the story itself, well that’s part mystery, part fantasy, and of course, part romance. With a complex and eerie air reading Sailor Twain is somewhat dream-like experience, or perhaps like diving into deep, cool water. 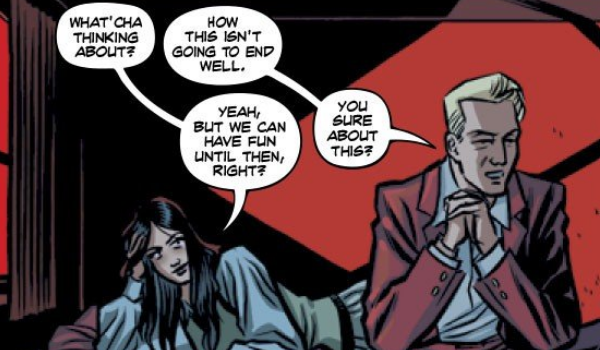 Join Heartthrob‘s Callie Boudreau as she receives a heart transplant in 1977. The procedure is still in its infancy so Callie is only getting about five extra years of life. But they will be her most eventful yet. See, after recovering from surgery Callie finds herself haunted. Turns out her donor felt like sticking around and now she’s stuck with his ghost who also happens to be a proficient criminal. Mercer quickly becomes not only her criminal mentor, but her lover as Callie leaves her old life behind and enters the much more exciting world of crime. Though she’s the only one who can perceive him, their relationship and the life they build are both very real.

Robert Wilson IV brings the seventies to life with bold art which acts as the perfect compliment to Christopher Sebela‘s obvious love for the decade. I’m especially fond of his knack for strong line-work and dynamic movement, perfect for car chases or Fleetwood Mac concerts. And Sebela’s crafted a complex heist story with an debt to the classic romance books of the mid 20th century. The love story between a criminal mastermind and her heart donor’s ghost is as complex and dramatic as the romance comics of yesteryear. Sebela captures a relationship fuelled by passion, uncertainty, and a great deal of recklessness. It’s by turns amusing, powerful, and heartbreaking. 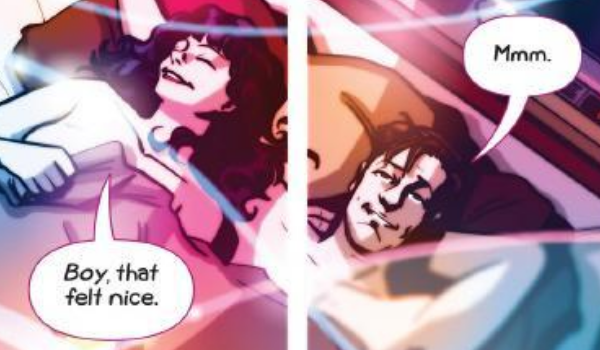 Suzie and Jon meet at a party and hook up. As is the way of modern romance. They then discover that they share a most exceptional secret. Each of them can literally freeze time with their orgasms. Having found one another they do the only rational thing in such a situation. They use their time-stopping orgasms to rob a bank and save an underfunded library. But it turns out that they’re even less alone than they initially thought. The world is actually full of people with super-powered orgasms. And some of them have banded together in an extremely controlling secret society. Along with navigating a world that’s rather more complex than they realized they also have the issues of any two neurotics in love.

Chip Zdarsky illustrates Sex Criminals with distinctive style. His line-work is sharp, his environments detailed without being overwhelming, and his people have a real sense of weight and energy ranging from languid to downright frantic. Also the guy is really, really good at drawing dongs. Despite the outlandish premise, Matt Fraction has written a story firmly rooted in a compassionate and complex understanding of sexuality. Sex Criminals is also notable for having fantastic back matter. Some of their letters and notes have been collected in Just the Tips, but if you want everything (and you should really want everything) just go ahead and add Sex Criminals to your pull list.

So there we have it love-birds. Eight comics to keep you and yours warm this Valentines. But what scorchers have we missed? Be sure to sound off in the comments or Twitter with your favourite romantic reads.