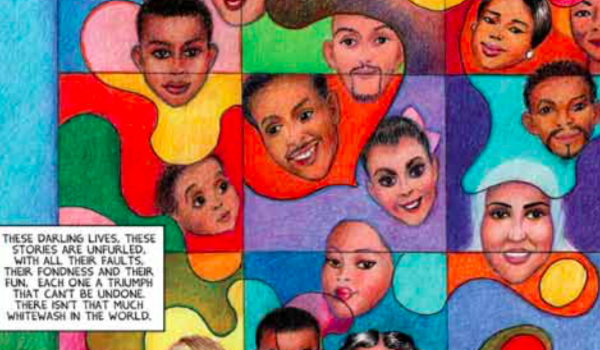 Early in the morning of June 14th 2017 a fire started on the fourth floor of Grenfell Towers. The fire would rapidly spread across the building, fueled by insulation and cladding, to burn through the next day. By the time the fire was finally put out it had taken 72 lives.

The physical causes of the fire are clear enough. A faulty appliance and unsafe building materials. But the systematic failures that lead to the devastation are rather more abstract. Institutionalized inequality, breathtaking greed. And because of that 72 lives lost. Then there are the scars. Physical ones of course, but also the more subtle scars of trauma. As Kieron Gillen notes “The thing about a disaster like Grenfell is we see the images and we are very aware of the enormous, immediate, physical harm and what we don’t often think about is the shadow as in how long it lasts, how people live with this forever.”

It is with such shadows in mind that creators Gillen, Steve Thompson, and Rhona Martin bring us 24 Panels. 24 Panels is a collection of comics by both established names and newcomers to raise money in order to serve those suffering from PTSD. It’s a worthy cause and an ambitious concept. Fortunately Gillen, Thompson, and Martin have collected a varied, nuanced, and beautiful anthology.

The stories herein follow the same format – all are 24 panels or fewer-otherwise they are diverse in both subject and style. Some relate directly to Grenfell. Alan Moore joins artist Melinda Gebbie and letterer Hassan Otsmane-Elhaou (who is responsible for much of the lettering within this volume) in “If Einstein’s Right.” Moore and Gebbie explore the concept of non-linear time. They showcase moments from the victims lives in brilliant color, while the guilty are preserved in stark black and white. It’s a moving, meditative concept given life in incredible, almost psychedelic art. 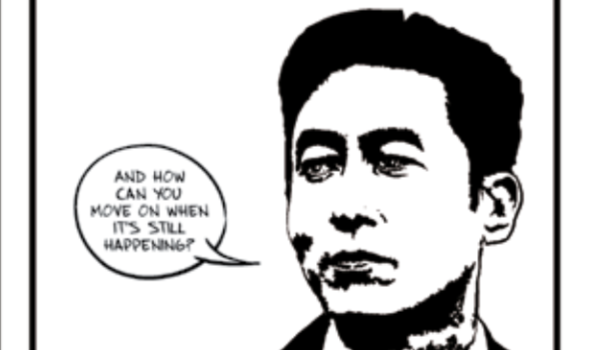 Of course the comic most directly connected to Grenfell is Gillen, Sean Azzopardi, and Otsmane-Elhaou’s “An Introduction.” With expressive illustrations they address us directly, making an intimate connection through their art. Here they take a moment to talk a bit not only of Grenfell, but of trauma, mental health, and healing.

Indeed, many of these comics are about general trauma, unconnected to the devastating fire. For instance Dilraj Mann brings us a wordless “A Little Hope” where an unnamed protagonist travels over jagged stone and thorn to finally collapse. It’s only when a little feathered bird appears that they can continue. It’s a simple, almost fairy-tale like concept, executed with emotional softness and bold art.

In an untitled offering Al Ewing and Doug Braithwaite use the comics to illustrate the isolating effects of trauma and the ways in which reaching out to one another can heal. It’s a deceptively simple comic, but one which skillfully uses that simplicity, working with the medium to great effect.

Some stories are less about disaster than they are about justice. For instance Daniel Santos, Débora Santos, and Toben Racicot present a story of thriving despite systematic oppression and economic exploitation in “The Favelas.” In this story a young ballerina uses her athleticism and help from her neighbors to continue her education. Her family and community helping her to keep growing and dancing.

Alex de Campi, Ro Stein, Ted Brandt, and Triona Tree Farrell have created one of the more political stores with “They Say.” Here a young girl living in low-income housing (not unlike the kind once offered at Grenfell) reflects on her home. On the ways in which it is demonized and disregarded. But also the ways in which it is so much more than it’s reputation. 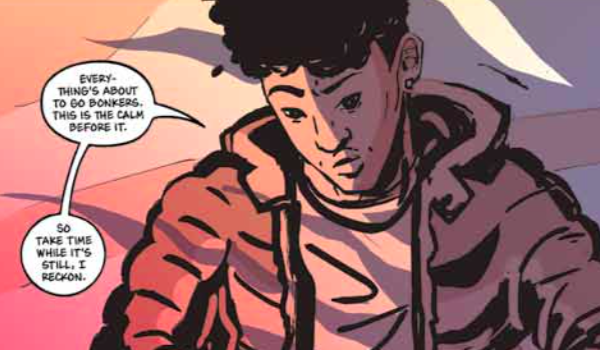 And then there are stories that are unrelated to Grenfell. There’s Dan Watters, Sarah Gordon, and Otsmane-Elhaou’s “Scratchcards” Where we find two friends taking a moment to chat beneath a broken  sky. It’s a funny, sweet story sure to make you smile with its combination of the soothing and the strange.

Also Laurie Penny, Gavin Mitchell, and Otsame-Elhaou’s “Human Child.” This is a classic fantasy where a mother stops a changeling from replacing her baby. But the Good Neighbors neglect to take the changeling with them so suddenly the woman has twins. “Human Child” is fundamentally a story of the ways in which families are born and help their members grow.

As you’ve no doubt gathered there is a great deal of diversity within these pages, and the stories mentioned above are but a fraction of what 24 Panels has to offer. Whether you’re a fan of sci-fi, slice-of-life, or the avant garde there’s something for you. And while the transitions between stories can occasionally be jarring such issues are easily forgotten, especially given a shared underlying philosophy.

This is of course a book about trauma and healing, but it comes through community, connection, and perspective. From the local support found in “The Favelas” to the unexpected family of human and fae in “Human Child” 24 Panels is about the ways in which we reach one another.

This is also a comic about seeing past fear, pain, and alienation. Sometimes quite literally. “They Say” looks beyond physical walls where “If Einstein’s Right” asks the reader to see beyond linear time. And Ewing and Braithwaite have people seeing past the very borders of the art around them. 24 Panels asks us to see beyond those limitations that make us feel more alone than we are and than we have to be.

There’s a certain understated hope to the collection, rooted in deeply felt humanism. Every story, every theme listed above is fundamentally about people. Many of these tales contain heroes (both super and otherwise). But in the end they all come down to a philosophy that values both compassion and community.

You can discover more about 24 Panels from Image Comics. Money raised from sales of the anthology will go toward supporting survivors of the fire. Have you already read the comic? Let us know in the comments below or send us a Tweet!