Home » Wandavision Episode 5 Review: Is Wanda the Only One Pulling the Strings? 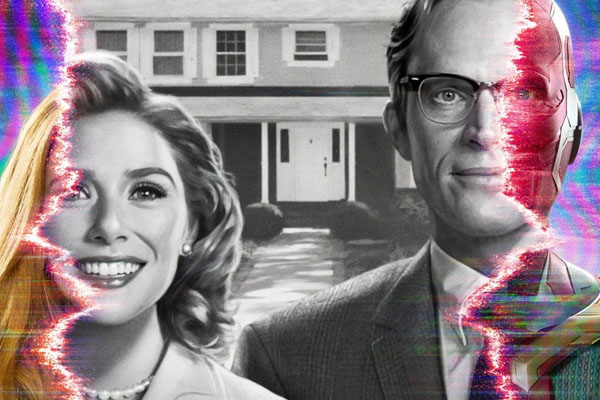 WandaVision episode 5 asks a big question of the Marvel Universe as a whole. Is a single para-military organization not led by a trigger-happy egotist? Congratulations Director Hayward; General Ross and Secretary Pierce would be proud.

Right from the start, we are introduced to the fact that twins Tommy and Billy are very special. Special in the sense that they seem to be somewhat immune to Wanda’s powers.

While Wanda and Vision struggle to put the babies to sleep, Agnes once again appears right on time. She soon breaks the fourth-wall and Vision realizes something is very strange, though before he can pry further, the babies stop crying, and it turns out they are now five years old. Vision becomes increasingly aware of his warped world. Vision’s confusion and concern grows as he begins to investigate further, and when he finally utilizes his own powers to pry into Norm’s mind, he discovers they are all trapped in this reality by ‘her’ design. While Wanda’s manipulations would lead Vision to believe she is doing this, there is seemingly another force at work.

Meanwhile outside of Westview, S.W.O.R.D. is making an attempt to somehow communicate with Wanda. While, Monica, Darcy and Woo are attempting to communicate, Director Hayward is attempting to live in his own reality in which he can kill an Avenger with a single missile (spoiler alert: it didn’t work). The attempt does however cause Wanda to exit the ‘Hex’ (A great term coined by Darcy due to the hexagonal shape of the Westview anomaly, and a great magic pun) and channel her non-canonical father Magneto as she forces all of Hayward’s men to aim their guns at him. Wanda however, has some right to consider him an enemy, as we learned that she recovered Vision’s dismantled body from a S.W.O.R.D. base. Monica attempts to reason with Wanda, though Wanda re-enters the hex, and seemingly closes it behind her.

Upon re-entering the Hex, Wanda and the boys find Agnes, holding what she claims to be their new puppy, now dead in her arms. While tragic, this is also very convenient, and one would believe Vision would have questioned Agnes’ timing had he not shown up late and busied himself with comforting his sons. Agnes is becoming an increasingly mysterious character as the series progresses. She seems to be conveniently at all places she needs to be. She often allows Wanda’s narrative to progress, and looking back even pushes other characters into action. Agnes even seems to plant the seeds of doubt about Westview in Vision’s mind. And S.W.O.R.D’s wall of WandaVision cast members, Agnes is the only missing link.

A great moment this week was for ‘Lagos paper towels: For the mess you didn’t intend to make’. These ad gags are always such a a fun break. But as they continue, it is clear they all stem from very dark places in Wanda’s psyche. Could this be her own way of coping, or is someone else pushing these thoughts into her head? Can Wanda even see the commercials?

Back in the Maximoff house, Vision finally confronts Wanda about what he heard from Norm. She responds logically and responsibly by literally rolling the credits on him. Vision however refuses to let this episode end. He reveals to Wanda he has no memories outside of Westview and his old life. This line of conversation is very strange as a viewer because, if Wanda is truly the person with the universal remote she could simply force Vision to lose his memories or even turn back time again. She has exhibited so much power in Westview that seeing Vision actually challenge her, makes you question her motives and undoubtedly forced her to question them as well.

Before their argument can be wrapped up they are interrupted by the doorbell, which Wanda assures is not her doing. On the other side of the door is her brother Pietro, but played by Evan Peters, Fox Entertainment’s version of the character. This was a twist that confused not just me, but Darcy and Wanda as well. The episode closes to Pietro wondering who Vision is. A strange question, considering they met before Ultron killed him.

Though the question on my mind is, since Wanda has brought Vision back from the dead, why this Pietro? And why not earlier? Could she actually be stealing people from alternate universes? Are the Pietro and Vision we see from realities where they didn’t perish? Or, is it possible that there is a larger force, Agnes perhaps, using Pietro as a distraction in order to keep Wanda in Westview for some reason? With every question answered more arise, as the layers are pulled back, I am excited to see what comes next!

How are you liking WandaVision so far? Let us know in the comments below or send us your thoughts on Twitter!